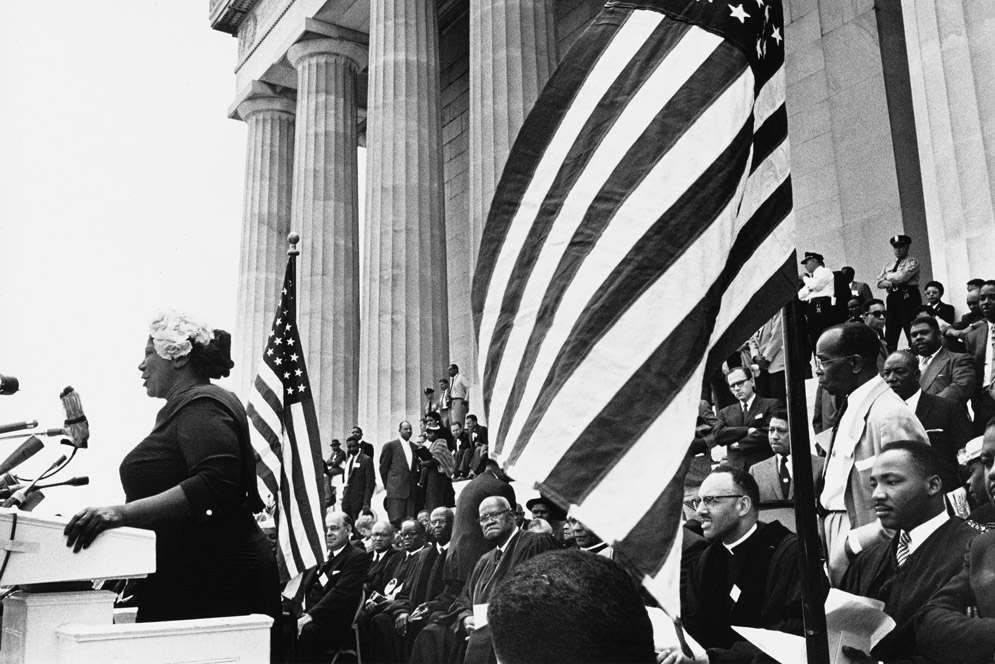 Just six years before Martin Luther King, Jr. (GRS’55, Hon.’59) led the famous 1963 March on Washington—one of the seminal moments in the nation’s struggle for civil rights—he and other black leaders came together at the Lincoln Memorial in Washington for an event called the Prayer Pilgrimage for Freedom. The May 17, 1957, gathering was timed to coincide with the third anniversary of Brown v. Board of Education, the Supreme Court ruling that outlawed segregation in public schools, and was designed to put pressure on the Eisenhower administration to desegregate the South and promote voting rights.

The event proved to be a critical moment in the American Civil Rights Movement. It was the first large-scale march by African Americans on the National Mall in Washington, D.C., and it drew a crowd of 25,000 people. It also solidified the reputation of King, then just 28 years old, as the nation’s preeminent leader in the fight for racial equality. It was at the pilgrimage that he delivered his first national speech, titled “Give Us the Ballot,” where he denounced voter suppression and racial violence.

Despite its significance, few people know about the pilgrimage today. And it might well have been consigned to a footnote in history books had it not been for the presence that day of 22-year-old photographer Lee Friedlander. At the time, he was making a living shooting jazz musicians for Atlantic Records album covers, but he persuaded pilgrimage organizer Bayard Rustin to give him a press pass to the demonstration. His photographs are now the subject of a captivating exhibition, Let Us March On: Lee Friedlander and the Prayer Pilgrimage for Freedom, on view at the Faye G., Jo, and James Stone Gallery at the College of Fine Arts through March 25.

That the prints were ever made public is, in its own way, remarkable. After the march, Friedlander, who would later become famous for his images of urban life and parks designed by 19th-century landscape architect Frederick Law Olmsted, was unable to get a single photo from the march published. At the time, King was still largely unknown and mainstream media still reluctant to cover the burgeoning Civil Rights Movement. 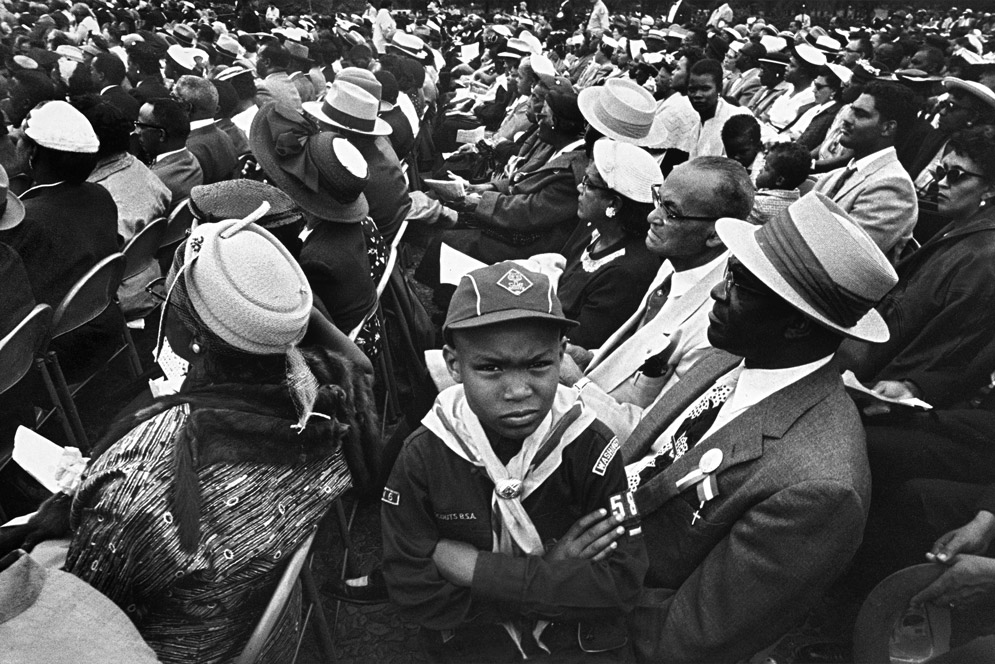 It wasn’t until 2014, when he was working with Eakins Press Foundation director Peter Kayafas on an exhibition at the Pratt Institute, that Friedlander showed Kayafas 58 never-before-seen photos from the event that he’d pulled from his archive. Kayafas decided to publish them the following year in a book, Prayer Pilgrimage for Freedom. The photos were then acquired by the Yale University Art Gallery, which mounted an exhibition that has subsequently been touring the country.

As one would expect, the 8×10 gelatin prints on view include plenty of images of the celebrities who were at the pilgrimage that day: gospel singer Mahalia Jackson, civil rights leaders King, Roy Wilkins, and Rosa Parks, labor leader A. Philip Randolph, and actors Harry Belafonte, Sammy Davis, Jr., and Ruby Dee.

But the exhibition’s real power lies in Friedlander’s unforgettable photos of the crowd. Looking at the images today, what first strikes the viewer is that unlike the March on Washington six years later, the people there on that spring day in 1957 were almost exclusively African American and largely middle-aged, a reminder that at that time, the fight for civil rights was still being waged predominantly by blacks. Photos of the later, more famous march show a much younger and racially diverse gathering.

Friedlander’s photos convey a quiet dignity and a remarkable intimacy. A kind of hushed reverence suffuses his work: the audience is dressed formally, in suits and ties, hats and gloves. They are listening intently, apparently unaware of his presence as he waded through the throngs. One of the few exceptions is the photograph of a young boy in a Cub Scout uniform looking directly into the camera with a defiant gaze, arms crossed.

The images of parents who had brought their children to the demonstration are the most poignant, whether the father with his two young children at the base of the Lincoln Memorial, with the 16th president looming behind them, or the father cradling his daughter as he and onlookers respond to one of the speakers.

Lynne Cooney (GRS’10,’16), artistic director of the BU Art Galleries, says that even though the pilgrimage took place more than 60 years ago, the Friedlander show is particularly timely.

“There are so many young photographers and artists who are also engaged with ideas of race and representation and equality and documenting movements such as Black Lives Matter and other protests and activists,” Cooney says. With that in mind, she reached out to three contemporary photographers—Sheila Pree Bright, Whitney Curtis, and Nancy Musinguzi—whose work centers around present-day social justice movements for inclusion in the show. Their presence, she says, “builds bridges between current events, the historic moment of the Prayer Pilgrimage, and Friedlander’s iconic images.” 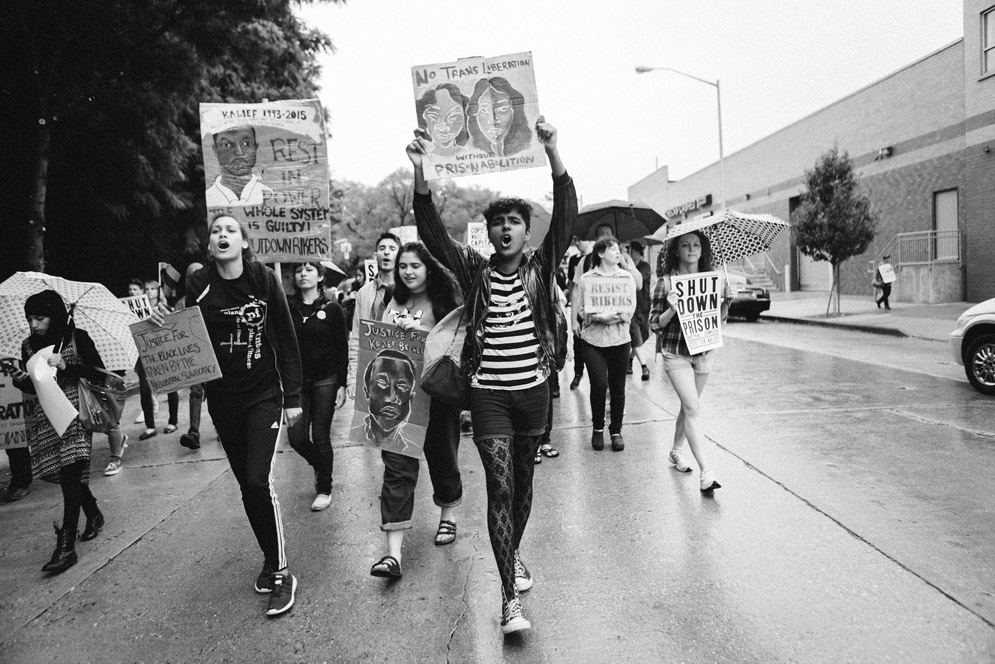 It’s also a stark reminder of how much work remains to be done to fulfill the goals set forth at that prayer pilgrimage more than 60 years ago.

Let Us March On: Lee Friedlander and the Prayer Pilgrimage for Freedom is on view at the Faye G., Jo, and James Stone Gallery, 855 Commonwealth Ave., through Sunday, March 25. The gallery is open Tuesday through Sunday, from noon to 5 pm, and Thursdays until 8 pm The exhibition is free and open to the public.

A gallery talk titled The Photographic Book, featuring a conversation with Kim Sichel, a College of Arts & Sciences associate professor of history of art and architecture, and Peter Kayafas, director of Eakins Press Foundation and publisher of Lee Friedlander: The Prayer Pilgrimage for Freedom, is today, Thursday, February 15, at the Stone Gallery.

A panel discussion titled They Were Always Marching: African-American Women and the Civil Rights Movement, with Ashley Farmer, a CAS assistant professor of history and of African American studies, artist Sheila Pree Bright, and exhibition curator La Tanya S. Autry, is Thursday, March 15, at 4 pm in the Stone Gallery. Both events are free and open to the public.

A Nearly Forgotten Moment in Civil Rights History
3
share this