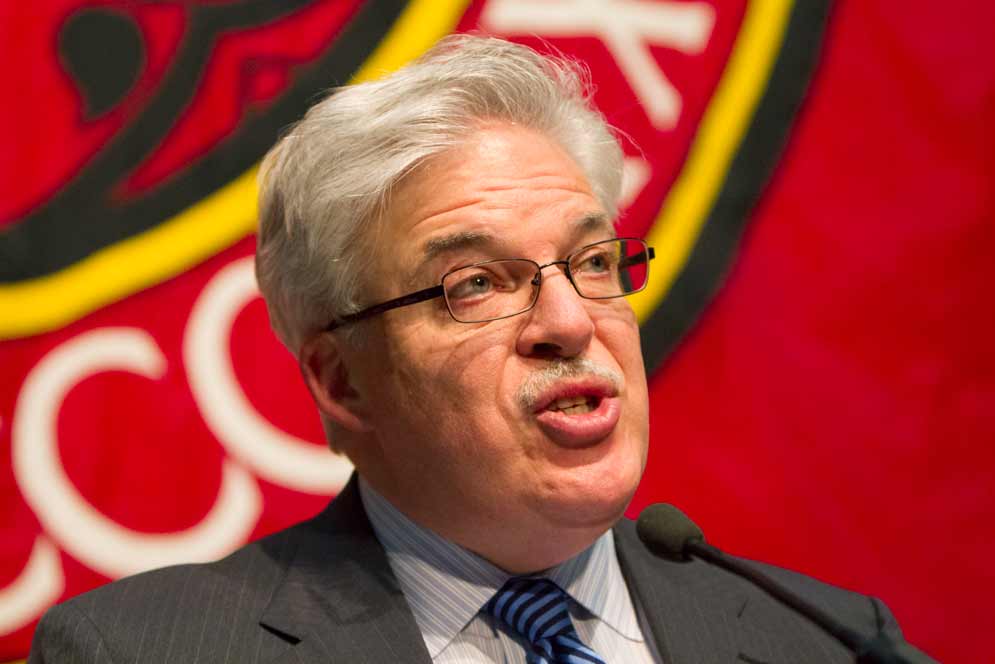 Peter Fiedler has done a bit of everything during his career at BU, from writing TV scripts to managing a radio station to overseeing the BU Police Department, even serving a stint as interim chief of Human Resources.

His hobbies are just as eclectic. He’s an expert marksman, a private pilot, and a long-distance motorcyclist. The son of legendary Boston Pops conductor Arthur Fiedler (Hon.’51), he plays the piano and keyboard. And he has the enviable responsibility of cuing the live cannons that explode during the zenith of the annual Boston Pops Independence Day concert on the Esplanade—the 1812 Overture.

“It’s sort of this potpourri of interests and capabilities that I have,” Fiedler says, smiling broadly through the same all-white mustache his father wore.

Fiedler (COM’76) will step down as vice president for administrative services at the end of December after more than 25 years managing key departments and thousands of the staffers who help the University run smoothly. His most recent responsibilities include overseeing the police and public safety divisions, WBUR, BU’s National Public Radio station, as well as BU Student Health Services, University Mail Services, and Human Resources. Those duties have been, or will be, reassigned to existing administrators before Fiedler’s last day, December 31.

Todd Klipp, former BU senior vice president and senior counsel, who Fiedler reported to between 2011 and 2016, calls him a “quintessential team player.”

“He’s always been someone who’s put the best interest of the University first and foremost,” Klipp says. “Without exception, in my dealings with him, I’ve found him to be a real gentleman with an unflagging and good sense of humor. Just a first-rate professional and a first-rate human being.”

Fiedler started his career at BU in 1993 as WABU-TV (Channel 68) director of operations. When BU sold the station to PAX Television in 1999, Fiedler went to work for Joseph Mercurio, former executive vice president, overseeing the Media Services Department—now Marketing and Communications—ushering its large print operation into the digital age.

In 2004, Fiedler, then an assistant vice president, was asked to fill in as acting general manager of WBUR. It was a tumultuous time for the troubled station: it was $21 million in debt to the University and its staff was demoralized after the sudden departure of former general manager Jane Christo (CAS’65).

But Fiedler was up for the challenge. “It worked out to be a great opportunity and one of the most challenging but fascinating undertakings that I’ve had in my career,” he says.

He was a good fit for the role. He had worked for years in television at WCVB-TV. As a College of Communication senior, he was hired as a script writer for Frank Avruch (COM’49), host of The Great Entertainment, a popular show about classic movies. Fiedler went on to work as a field producer and director for WCVB’s medical editor, Dr. Tim Johnson, who later was on the national stage on ABC TV’s World News Tonight, Nightline, and Good Morning America.

Fiedler says he met with WBUR employees and consultants to create a plan that included recruiting former WCVB-TV station president and general manager Paul La Camera (COM’66, MET’74) out of retirement in 2005 to run the station. Over the next five years, La Camera nursed the station back to financial health and improved its editorial content. The result: WBUR won the 2010 Edward R. Murrow Award for general excellence, adding to its collection of national journalistic honors.

In 2005, Fiedler was promoted to vice president for administrative services. The work, and the tenor of the college environment, suited him, he says. “One of the things I’ve enjoyed so much is the natural tendency for a university to be collaborative, to be engaging and open…a no-walls kind of philosophy,” he says. “That’s just right up my alley.”

He and his wife of 38 years, Dieuwke, live in the North Shore town of Boxford and have three children. Fiedler also worked for 11 years as a volunteer fireman and EMT in the town.

His hobbies, like his passion for music, also mirror his famous father’s interests. Arthur Fiedler was a “sparky,” part of a group of Boston-area men who listen obsessively to police and fire scanners and often follow public safety officials to nighttime fire emergencies while most people sleep.

Peter Fiedler says he’s not a sparky, but he is an avid marksman, competing in precision pistol shooting tournaments. He says his love for competitive marksmanship developed as a result of his relationship with former BU Police Chief Tom Robbins, who encouraged him to give it a try. Fiedler is also a licensed firearms instructor in Massachusetts. It’s centering, he says of this hobby, which he compares to yoga, because it requires stable breathing, focus, and steadiness.

Kenneth Elmore (Wheelock’87), associate provost and dean of students, has cochaired several task forces and initiatives with Fiedler and says he’s always appreciated his colleague’s knack for hopping in to help in any situation.

“He volunteers for the tough work,” Elmore says. “I have been fortunate to have Peter as a colleague ready to—when I asked—make paths, support, and nurture students. He is one of the genuinely kindest folks I know.”

Elmore says the two have enjoyed meeting regularly over the years, often at Scoozi, to talk about music, new shows, and movies. (HBO’s first season of True Detective was a favorite topic of discussion.)

Fiedler says it’s been an honor to have worked with so many talented colleagues at the University. He deeply appreciates the many people who have shared their experience and knowledge with him. He says they are all an essential part of his life and he will greatly miss BU.

“From each experience, I’ve learned something,” he says. “Not only about that particular interest, but about myself as well.

“You can’t buy that kind of experience, you know?”