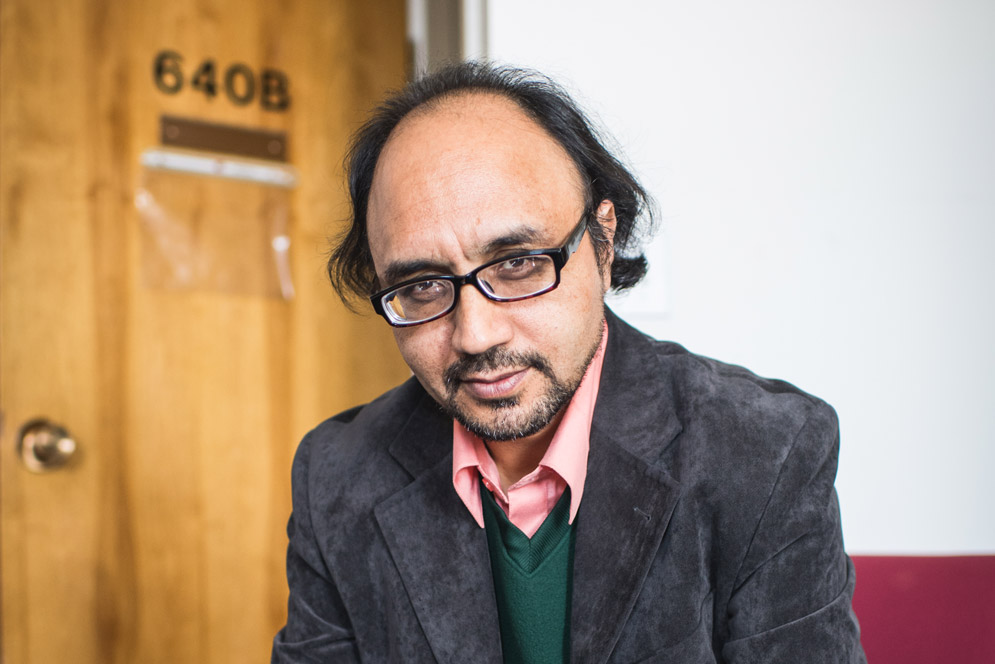 BU research fellow Sayed Hassan Akhlaq is now living in the United States thanks to Scholars at Risk, which helps academics who have been threatened for their ideas find sanctuary in colleges and universities around the globe. Photo by Jackie Ricciardi

Afghan academic Sayed Hassan Akhlaq wants to stay in the United States and continue studying philosophy, terrorism, and interfaith dialogue. The Muslim scholar can no longer do that in his native Afghanistan, where his work on cross-cultural dialogue and public education has been condemned by extremist groups.

For the next few months, at least, Akhlaq is safe at BU, brought here with support from the Scholars at Risk network, an international program that provides protection and financial support to academics whose research or teachings have put them in danger. Since 2013, the organization has helped more than 700 scholars, most of them from the Middle East and North Africa, find temporary positions at one of 400 member universities and colleges. Among its other services are advising for both scholars and hosts and campaigning for imprisoned scholars and those silenced in their home countries.

BU joined the Scholars at Risk program in 2015. Akhlaq is the University’s first guest scholar. Roberta Micallef, a College of Arts & Sciences associate professor of Persian and Indian literatures, says BU professors wanted to show their commitment to helping academics stay safe, so they reached out to Scholars at Risk and selected Akhlaq from a group of embattled scholars.

“We feel strongly that scholars should have the right to do good work, do good research, and not be punished for it,” says Micallef, who helped spearhead the effort to bring Akhlaq to BU. “It’s about the fundamental freedom of speech, freedom of thought, freedom to be good scholars.”

Akhlaq, who also goes by Sayed Hassan Hussaini (a common Afghan name that he changed, he says, to avoid putting others with the same name in danger), is a 42-year-old philosopher whose area of study is Islamic thought and Sufism, a mystical dimension of Islam, as well as Western philosophy and religious thought. He earned a PhD in comparative philosophy from Iran’s Allameh Tabataba’i University in 2009, worked as an academic advisor for the Afghanistan Academy of Sciences in 2010, and was dean of Gharjistan University’s Farah campus in 2011. A longtime advocate for human rights, including the right of women to be educated, he also taught at Iranian universities and has published five books focused on comparative philosophy, four in Farsi and one in English.

Born in Bamyan, Afghanistan, Akhlaq was four years old when his family left to escape the Soviet invasion and resulting Communist government in Afghanistan. They walked westward for three months, landing in Iran at a camp for immigrants. “I grew up influenced by the clash of ideologies, of Islam, communism, liberalism, and globalization,” Akhlaq says. “My hobby was listening to arguments, these debates.”

In 2012, Akhlaq came to the United States for a conference, and decided to look for a position in this country. He found one as a researcher at Catholic University and later secured the support of Scholars at Risk, which allowed him to stay in the United States. He chose to do that even though it meant he would be separated from his wife and children, who were living in Iran. 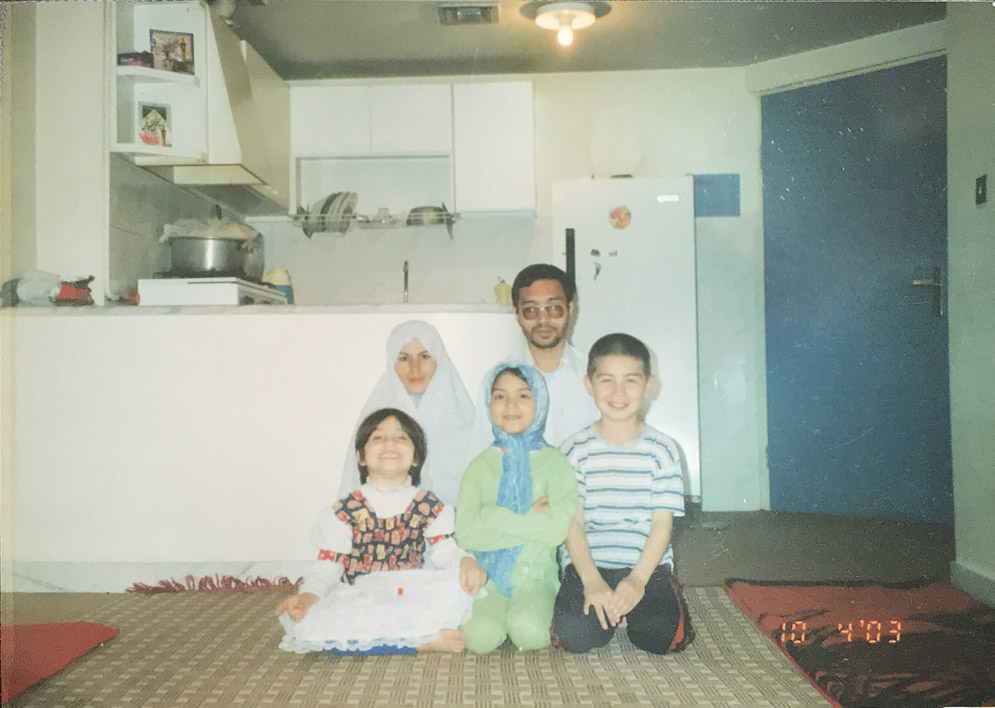 Sayed Hassan Akhlaq and his wife, Zainab, and children, Ruhollah, Hakima, and Marzia in Iran in 2002. They were separated for nearly four years before being reunited in the United States in 2016.

In late 2016, US Citizenship and Immigration Services allowed his wife and three children to join him in the United States.

Akhlaq arrived at BU in August 2017 for a one-year stint as a guest lecturer and research fellow in world languages and literatures. His position was funded through the efforts of the Provost’s office and department chairs in a variety of disciplines, Micallef says.

Sunil Sharma, a CAS professor of Middle Eastern and South Asian languages, says he and Micallef reviewed files of at-risk scholars and were impressed by Akhlaq’s credentials. They interviewed him via Skype before inviting him to BU.

“He has a very diverse range of expertise,” Sharma says. “He’s basically a philosopher, but his research touches on areas that include the environment, literature, gender….We provide a place where these scholars can work and think about the next step.”

BU students and faculty have been reaping the benefits of Akhlaq’s experience and thoughts, meeting with him in groups and individually. Scholars from embattled Afghanistan are few, Sharma says.

Akhlaq has given talks on women in Sufism, Micallef says, and he will speak with visiting scholar Sassan Zand Moqaddam on Renewal and Transformation: A Sufi Dialogue at a faculty luncheon on March 22.

Akhlaq says his ideas can help break down stereotypes that exist between Western and Islamic cultures. He is currently researching religious extremism, gender study, interfaith dialogues, and Sufism and philosophy with the hope that he can land a permanent position in the United States.

Megan Woolhouse can be reached at mwj@bu.edu.

There is 1 comment on BU Hosts First Academic Refugee