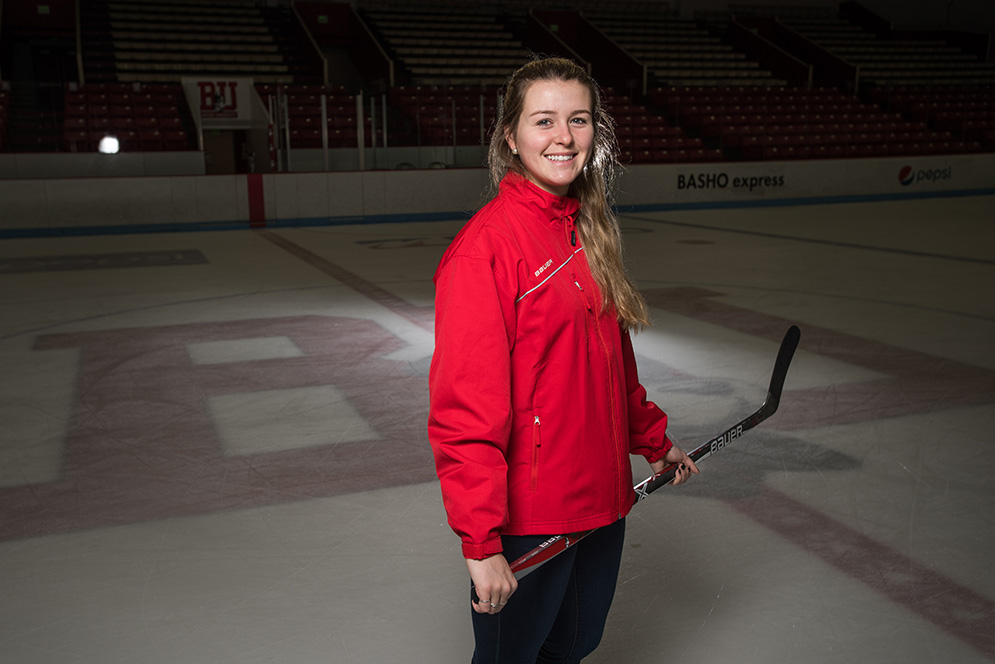 When Alexis Crossley was named cocaptain of this year’s BU women’s ice hockey team, she knew her duties would extend off the ice as well as on. As a three-year veteran, Crossley (CAS’16, MET’17) would need to be a steadying influence for a young club that includes six freshmen and three sophomores.

“Being a cocaptain changes my role a little bit, as far as setting an example,” she says. “People look to you for advice, and being someone who is positive and keeps everyone on the same page is one of the most important jobs for me this year.”

Crossley transferred to BU from the University of New Hampshire three years ago. As a high school student she had been recruited by women’s head coach Brian Durocher (SED’78) and had seriously considered BU, but opted for a smaller college. But after deciding to transfer, she says, she knew she wanted to play for Durocher, even though transfer regulations meant she had to sit out a year.

“After I decided originally to go with UNH, I got a letter in the mail from Coach Durocher saying congratulations on my commitment and that he was excited to watch me grow over the years, even though it wasn’t his program,” she recalls. “That stuck with me when I was looking at transferring, and it was a big part of why I felt BU was going to be the best choice for me.”

Durocher says that while many players would have been frustrated by being forced to sit out a season, Crossley turned it into a positive experience.

“She came in here very vibrant, very energetic, very engaging,” he says. “She went and helped in sports information, did stats for the games, and took her mind off of just sitting around the locker room. She got herself into what may be the best shape of her life. Alexis turned what could have been a slight negative into three or four positives.”

Crossley is reflective as she begins to wind down her BU hockey career—one she hopes to cap off with a Beanpot tournament win and a Hockey East title. “Coming into the last stretch of the season, as a senior, it really starts to hit home,” she says. “It’s going to be the last handful of games that you play in your college career. We take it one game at a time, but there’s always that thought in the back of your head: when is that last game going to be? How far can we make it?”

The answer to those questions will depend largely on the team’s performance over the final nine games of what Crossley describes as a “roller-coaster season” that’s had highs—an electric back-and-forth with rival Boston College (a win, a loss, and a tie) and an overtime win against national powerhouse Minnesota—and lows (a lackluster 7-7-3 Hockey East record). Crossley knows that each game will be crucial in deciding how the Terriers enter the Hockey East Tournament.

The first big moment of the home-stretch campaign will be the 39th Women’s Beanpot, the annual tournament pitting four Boston area teams, BU, Boston College, Harvard, and Northeastern, which kicks off on Tuesday, January 31, with the second round on February 7. Crossley is mindful of the fact that the team has failed to capture the women’s title since 1981, when it was still a club sport, something she hopes to help change before she departs.

“Beanpot is always exciting, but also a sore subject for us to talk about,” she says. The championship drought “is always lingering in the back of everyone’s mind, and every year we go into it with the intention of coming out with a Beanpot championship. The possibility of winning a Beanpot is not out of the question, and it’s just as big to us as the Hockey East Tournament.”

As the team prepares for a sprint to the finish, fellow cocaptain Natalie Flynn (CGS’15, SHA’17) says Crossley’s calm and steady hand has proven crucial.

“She definitely has that asset,” Flynn says. “When things get crazy on the ice, she’s calm, but it’s also in the locker room. If people are kind of frantic or freaking out, she says a few words and gets everyone back on the same page. She’s just an all-around great person. I think she embodies everything that BU stands for in the athletic program and academically.”

No matter the Beanpot outcome, Crossley, who earned an undergraduate degree in biology last May and will wrap up both a master’s in urban affairs and a graduate certificate in applied sustainability this spring, says she’ll leave BU with fond memories.

“The first year that I was here, even though I had to sit out of games, was the year we won our last Hockey East championship. Being a part of that was extremely exciting,” she says. “BU has also offered me a lot of opportunities academically. I’m coming out with more degrees than I ever expected to.”

Following graduation, the defenseman plans to move to Arizona to be with her fiancé, who coaches basketball at the University of Arizona, and she will step away from the game to deal with a few nagging injuries. “Being healthy mentally and physically is a major priority for me after I finish, because college athletics is rigorous and takes a toll,” she says, adding that she hopes to go to dental school.

But before all that, she plans to take on a very different physical challenge.

In June the Nova Scotia native and her father will be racing in the 2017 Trans Am Bike Race, a 4,300-mile ride from Astoria, Oregon, to Yorktown, Virginia. Crossley plans to use the race to raise money for IMK Health Centre, her local hospital in Halifax, Nova Scotia, and to stress the importance of a healthy, active lifestyle in combating childhood obesity.

“I told my dad that when I graduated, I wanted to do a race with him,” she says. “The Trans Am just seemed like a perfect way to celebrate graduation and to also spend some needed time with my dad that I haven’t had over the last nine years living away from home.”

The Trans Am Bike Race was a reason BU Athletics nominated Crossley for the 2017 Hockey Humanitarian Award, which is presented each year to a male or a female college player who has demonstrated personal character, scholarship, and “the giving of oneself off the ice.” She has been chosen as one of this year’s 15 nominees.

“I think it’s extremely humbling to have people think of me as someone who is willing to go out and better the community, whether it’s here or at home,” she says.

Durocher isn’t surprised by her latest endeavor. “She’s a great family person, and she has great family at home,” he says. “They’ve taught her well as far as how you’re supposed to treat people and to not be afraid to go out and do things. Her job in life is to make sure that she’s spreading her good fortune, her spirit, and her willingness to help and work with people in so many ways.”

While Crossley says she is committed to spending some time away from the sport she’s played since she began taking skating lessons at age three, she knows she cannot stay away forever.

The BU women’s ice hockey team plays Providence College at Providence tomorrow, Saturday, January 21, at 2 p.m. and will host Providence the next day, Sunday, January 22, at 3 p.m. at Walter Brown Arena, 285 Babcock St. Tickets for Sunday’s game are free for students with a sports pass, $4 for faculty, staff, and students without a sports pass, and $6 for the general public. Sunday’s game will be streamed live here.