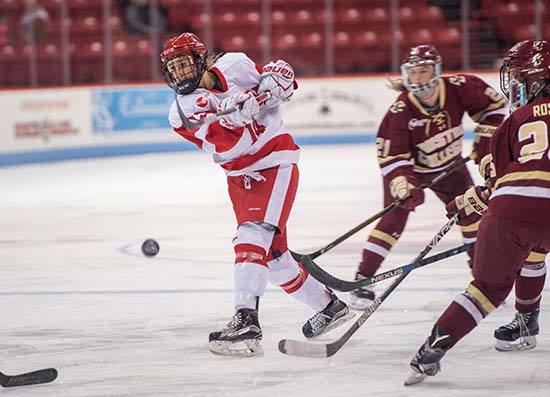 Maddie Elia (COM’17) attempts a shot on goal against BC in the first period of the opening game of the 39th annual Women’s Beanpot Tournament last night. Elia’s second-period goal gave the Terriers a 2-1 lead, but the Eagles stormed back to win 3-2. Photo by Cydney Scott

The opening round game of the 39th annual Women’s Beanpot Tournament Tuesday night was a thriller, as BU went up against rival Boston College at Northeastern’s Matthews Arena. It took nearly all of regulation to decide a winner.

When the dust had settled after a goal from the Eagles’ Caitrin Lonergan with under three minutes left to play, the BU women’s ice hockey team’s hopes of ending a 36-year tournament championship drought were dashed.

The 3-2 loss dropped the Terriers out of contention for the trophy and sent them to next Tuesday’s consolation game, where they will square off with Harvard, which lost last night’s second game to Northeastern 4-1. The puck drop for the consolation game is set for 4:30 p.m. at Northeastern.

Just 1:17 into the first frame, BC’s Makenna Newkirk got in behind the Terrier defense, piercing BU goaltender Victoria Hanson (Questrom’17) to give the Eagles a 1-0 lead. The goal would be the only tally of a fast-paced first period.

The Eagles were heavy with their forecheck in the opening stanza, keeping BU hemmed in its own zone for much of the period. When the Terriers did find their way to BC netminder Katie Burt, the backstop was up to the task. She made eight saves in the period, the biggest coming on a Rebecca Leslie (CAS’18, Questrom’18) rebound chance from the right circle.

The pace continued to quicken, and the tide seemed to turn in the second, with BU skating well in transition, getting three cracks at the power play, and cashing in on two of them. Nina Rodgers (CAS’18) slammed a rebound into a yawning net just over seven minutes into the period to tie the game at 1. Maddie Elia (CGS’15, COM’17) then poked one home in a scrum to give the Terriers a 2-1 lead heading into the locker room.

The BU penalty kill also factored into the frame, with the Terriers stymying two Eagle chances. They found outlets for the BC pressure along the boards throughout the period, helping them overcome the forecheck that stumped them in the first.

However, the momentum of the back-and-forth contest swung for a final time in the third period, with Newkirk picking a corner over Hanson’s shoulder on the power play to notch her second goal of the contest and knot the game at 2. From there, the two teams battled until Lonergan tucked home the game-winner, igniting a celebration among the Eagles and their fans.

BU won the faceoff battle by a final count of 32-19, but the strong showing on the dot wasn’t enough to put the Terriers over the top. After a second period that saw them outshoot the Eagles 15-5, the Terriers buckled in the category in the third frame, allowing BC to outshoot them 12-4 in the period and 31-27 in the game.

After next week’s consolation game, the Terriers will turn their attention to the final stretch of Hockey East play. Currently sitting in a tie for third place with Providence, BU will finish out its regular-season slate with a pair of games against New Hampshire and matchups with Northeastern and Maine before hosting the Hockey East Championship Tournament at Walter Brown Arena March 4 and 5.

The 39th Annual Women’s Beanpot: The BU women’s ice hockey team will play Harvard in the consolation game next Tuesday, February 7, at 4:30 p.m.; the title game between Boston College and Northeastern follows at 7:30 p.m. Both will be played at Northeastern’s Matthews Arena, 238 St. Botolph St., Boston. Purchase tickets here or call 617-373-4700. Tickets are $10 for the general public, $5 for youths, and free for students, faculty, and staff from the participating schools with a valid school ID, available only in person.