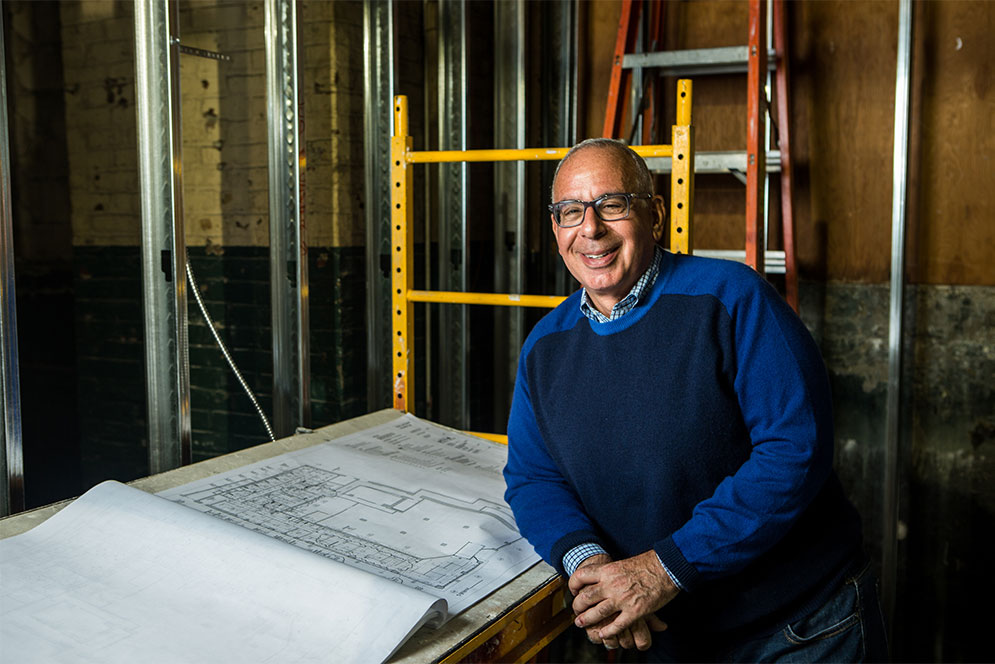 Clarinda Blais (CAS’17) started the Free Philosophy Project to bring Aristotle and Plato to women in homeless shelters in Boston as a way of getting them to talk about their lives.

Computer engineering major Jacob Dansey (ENG’17) and a team of other computer science majors and students from the Questrom School of Business created civic engagement software to ease communication between elected officials and constituents. By the time Dansey and his team graduated, they had formed a company, Involved, Inc. With guidance from the Rafik B. Hariri Institute for Computing and Computational Science & Engineering’s Spark! they were meeting with state legislators who wanted to try out their software. With help from Questrom’s BUzz Lab accelerator, they continued to fine-tune it over the summer.

And that’s only the beginning.

Robert A. Brown, University president, wants BU to do more to get this kind of thinking about, doing about, and solving of real-world problems percolating among undergraduates and graduate students. With that aim, he is launching a University-wide initiative to give all BU students, whether they’re studying science and engineering, the arts and humanities, business, or communication, opportunities to learn and engage in creative problem solving and hands-on innovation.

“I believe that we have an obligation to give our students the ability and opportunity to innovate, which means converting their ideas into tangible impact.”—Gerald Fine, executive director of Innovate@BU

Funded by a partnership of the University and a group of alumni, BU is starting the new initiative, called Innovate@BU, with support of $20 million for the first 10 years. It is not tethered to a single school or college. Rather, Innovate@BU is designed to draw students, and ideas, from across the University.

In addition to people and programs, a key ingredient for the initiative is a highly visible space. The University is turning the former Radio Shack store, at the corner of Commonwealth Avenue and St. Mary’s Street, into a 6,000-square-foot home and student hub for Innovate@BU. Called the BUild Lab: IDG Capital Student Innovation Center in recognition of the lead support from IDG Capital and its CEO, University trustee Hugo Shong (COM’87, GRS’90), the space will have wraparound glass walls, plenty of team meeting rooms and student workspaces, offices for Innovate@BU program leaders and mentors, oversized video screens for presentations, and lots of open space for hackathons, accelerators, classes, and hands-on workshops with mentors and experienced innovators from industry, government, nonprofits, and the arts. Expected to open in January 2018, the BUild Lab will be a place where students can connect with advisors, find funding sources, collaborate with other students on projects, and get help with matters from design and prototyping to legal advice and marketing.

“I am delighted that the contribution from IDG Capital will help students to realize their dreams by working at this innovation center,” says Shong.

Brown views Innovate@BU as an essential part of preparing students to navigate a workplace that is being rapidly transformed by start-ups, big data, robotics, and artificial intelligence. To succeed in the new economy, he says, young people will need to be “self-motivated, self-directed, and self-actuated” and to have this same combination of skills and mind-set to create new enterprises that benefit society and to search for creative solutions to societal problems. He hopes the new initiative will help create more innovators interested in solving social issues, engaging in the arts, or creating new businesses.

Brown has appointed Gerald Fine, a College of Engineering professor of the practice of mechanical engineering, as executive director of Innovate@BU. Fine has helped create and lead ENG’s manufacturing and design facility, the Engineering Product Innovation Center (EPIC).

“I believe that we have an obligation to give our students the ability and opportunity to innovate, which means converting their ideas into tangible impact,” says Fine, who has launched six successful start-ups and served on the board of several nonprofit organizations. “Impact could be solving social problems, finding new ways to bring art to the community, or creating new businesses. Regardless of the path our students choose, these innovation skills will help position them for more fulfilling and meaningful careers.”

Ian Mashiter, a Questrom senior lecturer in strategy and innovation, who currently oversees BUzz Lab, will run the BUild Lab. “It’s about achieving the impossible with limited resources,” says Mashiter. “It’s about begging, borrowing, and stealing—getting your friend to do your website for free. It’s about your cousin who knows somebody who’s a great graphic artist. It’s connecting, going to networking events. It’s about making stuff happen.”

Innovate@BU signals “that all of our students, when they go out into the world, need a creative problem-solving, innovative mind-set,” he says. “It’s not about needing to make $10 million a year. It’s about solving problems with limited resources. We want to put students into situations where they experience it, where they’re learning by doing.” 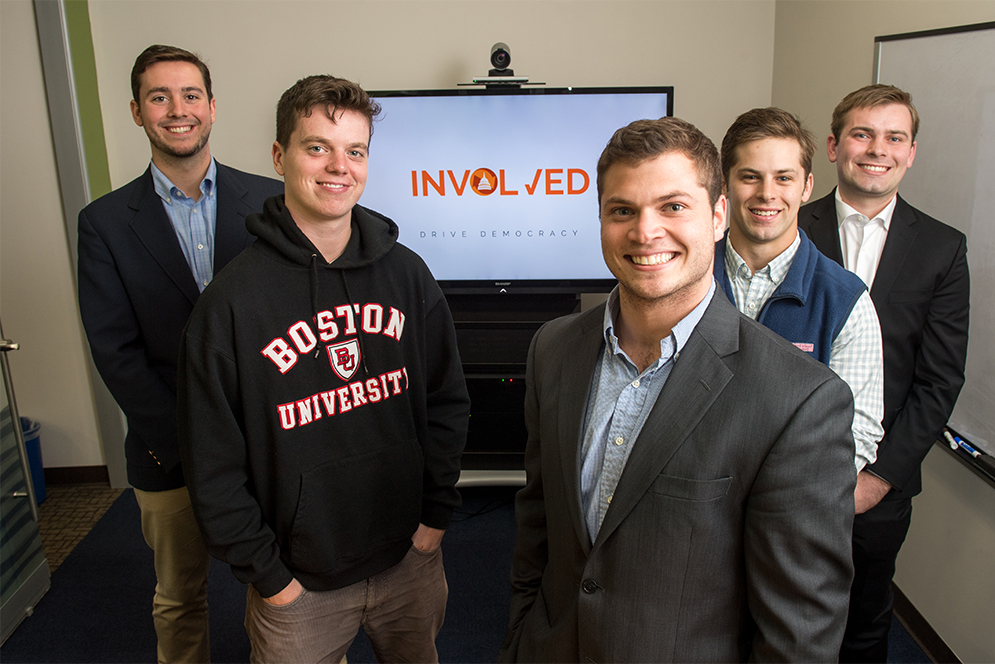 Reporting to Mashiter will be two program directors:

Rachel Spekman, former senior director of programming at Boston accelerator MassChallenge, will oversee business ventures, including start-up activities, grants, a summer accelerator, new venture competitions, mentoring programs, and workshops. She will also be a liaison to student organizations like the BU Entrepreneurship Club, preexisting resources at BU such as EPIC, and external programs like MassChallenge.

Blake Sims, the founder and CEO of Epiic Solutions, which creates programs that help middle and high school students to develop the mind-set of creative innovators, will develop and launch Innovate@BU social and cultural entrepreneurship activities, including a summer accelerator, competitions, mentoring programs, and workshops. A major part of her role will be working with the city of Boston and local nonprofits and connecting students with these partners to help develop solutions to their challenges.

In addition to the BUild Lab, Innovate@BU will include three other major components:

The new initiative grew out of a yearlong faculty study, Innovate@BU: Creating a Vision for Entrepreneurship and Innovation@BU, led by Siobhan O’Mahony, a Questrom associate professor of strategy and innovation, and coauthored by Mashiter. O’Mahony will be the Innovate@BU director of curriculum and research.

Fine says that there are already numerous programs and facilities supporting innovation across BU, ranging from the College of Communication AdLab to its student-run public relations agency PRLab to the Hariri Institute’s Spark! He also notes that O’Mahony’s original study identified more than 50 University courses that already teach some principles of innovation.

“Our job is not to replace these activities, but to nurture them, grow them, supplement them, and make them more visible,” he says.

“If we can graduate, in my wildest dreams, 1,000 students a year who have improved their creative problem-solving ability and are more flexible and creative about how they’re going to enter the workplace going forward,” Brown says, “we will have had a huge impact.”

If some of those students become transformative social entrepreneurs, like Wendy Kopp (Hon.’13), who founded Teach for America, or visionary innovators like Mark Zuckerberg, Facebook cofounder, he says, so much the better.