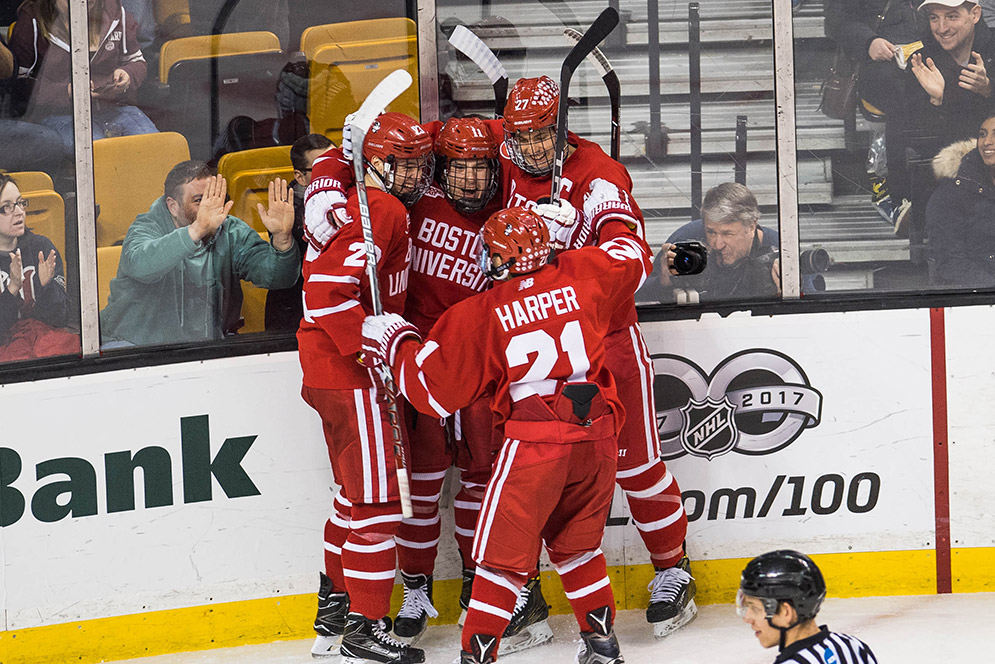 The BU men’s hockey team advanced to the Beanpot championship game for the third straight year with a 3-1 victory over rival Boston College in round one of the tournament Monday night at TD Garden. The Terriers will face Harvard February 13 in the title bout. Photo by Jackie Ricciardi

Jakob Forsbacka Karlsson (Questrom’19) netted his 11th goal of the season just 4 minutes and 29 seconds into the first period of round one of the 65th Annual Beanpot Tournament Monday night at TD Garden, and the BU men’s hockey team never looked back on its way to a 3-1 victory over rival Boston College. The Terriers now advance to their third straight Beanpot championship game, taking on Harvard next Monday, February 13.

The win was the Terriers’ first in the last six Beanpot matchups with the Eagles, a streak that culminated in a 1-0 overtime squeaker in last year’s finale. It also marked the first time BU has swept the Eagles in the regular season since the 1994-95 campaign.

The puck fell to Forsbacka Karlsson on the doorstep after an initial wraparound attempt on BC goaltender Joseph Woll. The Terrier sophomore banged it home, opening the scoring and giving BU a lead it never relinquished.

The first frame set the tone for the rest of the matchup. BU held the Eagles without a shot on goaltender Jake Oettinger (CGS’18) for more than 18 minutes of play and allowed just two overall in the period en route to a 1-0 lead at the first intermission.

“I really liked our first tonight. We were ready to play from the drop of the puck,” men’s head coach David Quinn (CAS’89) said at a postgame press conference.

The Terriers picked up where they left off after the break, with Chad Krys (CAS’20) piercing Woll from the left circle on an early power play to extend the BU lead to 2-0. The goal came just over three minutes into the middle frame.

While BC attempted to wrest the momentum away with a rebound goal from Austin Cangelosi, Clayton Keller (CGS’18) sent home his team-leading 14th of the season on a short-handed backhand goal to restore the Terriers’ two-goal advantage and send them into the final intermission with a 3-1 lead.

“It was pretty special, especially playing BC in that atmosphere,” Keller said after the game. “It was great to get the win tonight, and now we’re focused on Friday against UMass Lowell and the next Beanpot game on Monday. I think we’re going to do all the right things to prepare for that game.”

Keller’s goal extended the freshman’s point streak to 15 games, the longest by a Terrier since Jay Pandolfo (CAS’96) in the 1995-96 season.

The Terriers looked to have iced the game in the third period with another early tally, but an apparent goal by Ryan Cloonan (CGS’17) was overturned. Upon review, Woll was deemed to have been pushed into the net while in possession of the puck.

“It was a little bit of a head scratcher, but you’ve just got to keep playing,” Quinn said.

The insurance would prove to be unnecessary. The Terriers, who entered the game having held opponents to a .131 conversion percentage on power plays, continued their strong play by stopping the Eagles on all four of their chances, outlasting a surging BC team in a penalty-ridden third to seal the 3-1 win.

“The third was a little bit of a give-and-take, but I thought we played smart hockey,” said Quinn. “Any time you can beat BC, you know you played pretty well. It was a good night for us overall.”

BU has long held the most Beanpot trophies and has its sights on bringing number 31 back to Commonwealth Avenue when it faces off with Harvard in the tournament’s title game. The Crimson, who will enter the contest looking for an 11th championship, escaped with a 4-3 win over Northeastern in last night’s first semifinal game. In their only meeting this season, on November 22, the Terriers skated to a 5-3 win over Harvard at Agganis Arena.

The Terriers and the Crimson last met in a Beanpot championship game in 1998, when BU took home a 2-1 overtime victory.

The 65th Annual Men’s Beanpot Tournament: The BU men’s ice hockey team will play Harvard in the championship game next Monday, February 13, at 7:30 p.m., preceded by the consolation game between Boston College and Northeastern University at 4:30 p.m., both at TD Garden, 100 Legends Way, Boston. Purchase tickets on Ticketmaster or Stubhub. The games will be televised live on NESN and broadcast live on WTBU Radio (640 AM and 89.3 FM) and on the Terrier Sports Radio Network.

Terriers Claim Victory in Beanpot First Round
1
share this