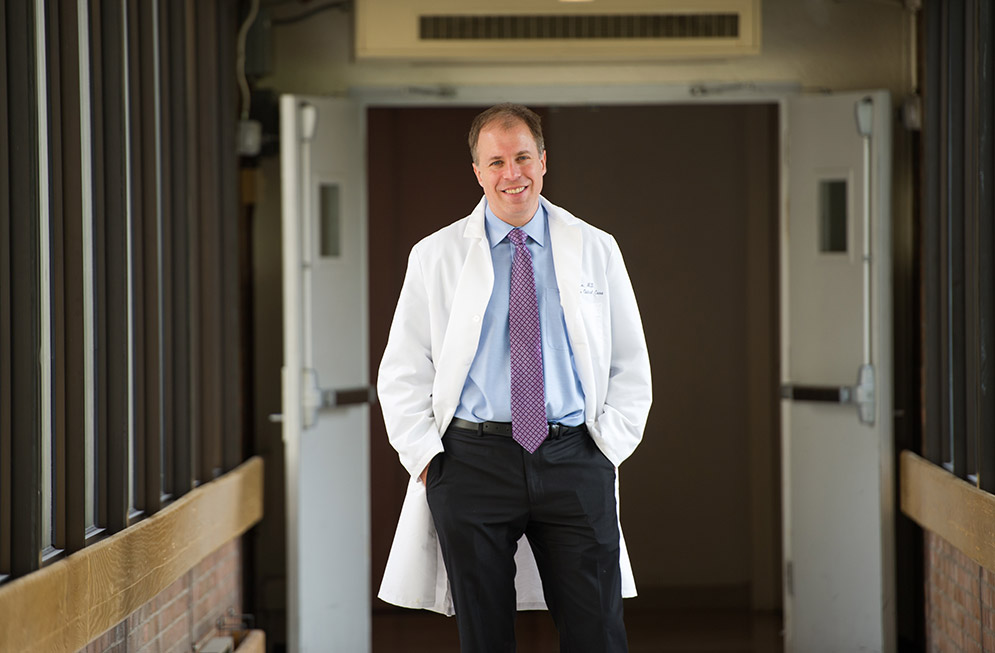 BU’s Avrum Spira, a pulmonary physician scientist who has devoted his career to research on early detection of lung cancer, leads a Stand Up To Cancer lung cancer interception dream team. Photo by Cydney Scott

Can lung cancer, rarely diagnosed until it’s in an advanced and deadly stage, be nipped in the bud?

Avrum Spira and his team intend to find out.

Armed with $12 million in funding, team members hope to develop diagnostic tools such as nasal swabs, blood tests, and radiological imaging to detect lung cancer at the earliest possible stages. That is key, Spira says: lung cancer is the leading cause of cancer death in the United States and worldwide in large part because it is detected too late. The SU2C dream team grant is providing $5 million, with funding support from LUNGevity, and the American Lung Association and its LUNG FORCE Initiative. The additional $7 million will be provided by Janssen Research & Development, LLC, one of the Janssen Pharmaceutical Companies of Johnson & Johnson, which is already investing more than $10 million in Spira’s research into biomarkers for the early detection of chronic obstructive pulmonary disease and lung cancer.

“We plan to develop technology that can, in a very sensitive way, pick up the small amount of DNA that might be present in the blood of someone who’s harboring a lung cancer deep within their lung tissue,” says Spira, director of the BU-Boston Medical Center Cancer Center. “It’s a noninvasive way of measuring a person’s risk of having lung cancer.”

The scientists on the team will also develop new blood tests that will help identify patients who have already been successfully treated, but whose disease is in the earliest stages of recurrence.

“It’s the first time SU2C is funding a dream team for intercepting lung cancer as opposed to treating late-stage disease,” Spira says. “The idea here is to prevent or intercept the development of lung cancer when it is at its earliest pre-cancer stage, just as we have done for cardiovascular disease and certain infectious diseases. This is a fundamental shift away from focusing translational research and clinical trials on late-stage disease. This is where we need to go. To me, it’s the beginning of an exciting new era of cancer research.”

Coleading the team with Spira is Steven Dubinett, a University of California, Los Angeles (UCLA), professor of medicine, pathology, and molecular and medical pharmacology and associate vice chancellor for research. He is also the director of the lung cancer research program at the UCLA Jonsson Comprehensive Cancer Center.

“Stand Up To Cancer forces you to work in team science,” Spira says. “They take the best and the brightest from multiple institutions and say, ‘You have to work together toward one goal.’ Normally you compete with each other.”

Spira and his collaborators will use state-of-the-art technologies, many developed by team members, to understand the genetics, immunology, and radiological imaging of patients who show signs of abnormal lung tissue that puts them at high risk for developing lung cancer. Janssen will help the scientists understand how the immune system protects people against pre-cancer becoming cancer in order to accelerate development of vaccines to prevent lung cancer, Spira says.

The SU2C team has assembled blood and tissue specimens from patients who have signs of lung cancer risk. Members will study how early lung cancer develops and will test methods to block the disease’s development, using three approaches:

1) Create a precancer genome atlas of the lung. These studies will use precancer cell DNA to identify which types of precancerous lung tissue require treatment and which treatments will block the development of these abnormal lung tissues into lung cancer.

2) Develop noninvasive diagnostic tools for accurate detection of early lung cancer. While advances in imaging are uncovering more lung abnormalities, new molecular and imaging techniques will be developed for detecting which of these lung lesions are cancerous.

3) Develop tests to match individuals with the right treatment strategy to intercept their lung cancer. The team’s ultimate goal is to make it possible for every person to have a personalized interception approach to their lung cancer.

Spira’s team is one of four new SU2C research teams created under its new Cancer Interception Initiative, two on cancer of the pancreas and two on cancer of the lung, that are being funded with a total of $16.6 million, with support from the Lustgarten Foundation for Pancreatic Cancer Research, LUNGevity, and the American Lung Association and its LUNG FORCE Initiative, as well as SU2C. The teams were selected by SU2C scientific advisory committees in a process managed by the American Association for Cancer Research.

“The SU2C Cancer Interception Initiative is focused on developing both the technologies needed to find cancer or precancerous activity at its earliest possible juncture, and the treatments to stop its progression,” says SU2C scientific advisory committee chairman Phillip A. Sharp, an MIT Koch Institute for Integrative Cancer Research Institute Professor and a Nobel laureate. “This could save many lives and avoid untold human suffering.”