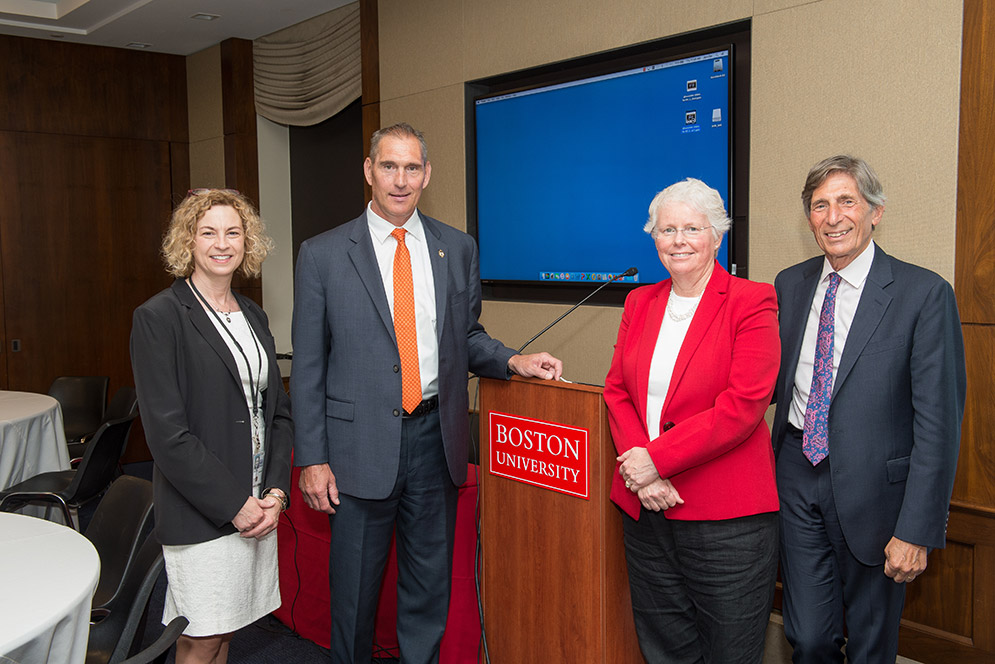 As a gung-ho young police officer in Arlington, Mass., Fred Ryan agreed with the prevailing view that the best way to handle drug abusers was to “lock ’em up.” Now, as Arlington’s chief of police, he found himself at a Capitol Hill briefing advocating a very different solution to the nationwide opioid crisis. Substance abusers, he told an audience of Washington staffers who work on healthcare policy, should not be arrested; they should be helped into treatment.

To explain how his thinking had changed, Ryan told his Washington audience about the moment, in 2015, when he spotted a young woman named Kayla on a departmental list of overdose victims. He had gone to high school with her parents.

“They were an American success story,” he said. “Her dad was an honorable veteran, a firefighter. Her mom was an educator. Kayla was a graduate of the University of Massachusetts. Kayla became addicted to pills.”

Three times in seven days, Kayla overdosed. Twice, police saved her with naloxone, a medication that reverses opioid overdoses. The third time they were too late.

“Kayla was dead,” said Ryan, who has become a leader in the national movement to involve police in getting substance abusers into treatment. “And if that doesn’t illustrate the fact that these fatal overdoses are not only predictable, they’re preventable, I don’t know what does. I said, ‘Damn the torpedoes, we’ve got to stop the bodies from turning up.’”

The crowded July 20 briefing at the Rayburn House Office Building, hosted by University Provost Jean Morrison and the Congressional Caucus on Prescription Drug Abuse, highlighted ways in which police across the country are joining with public health experts to keep substance abusers alive and help them get treatment. Ryan was joined by two other speakers: Kimberly Johnson, director of the Center for Substance Abuse Treatment within the Substance Abuse and Mental Health Services Administration (SAMHSA), and David Rosenbloom, a BU School of Public Health (SPH) professor of health law and policy who is also a volunteer consultant to police in Arlington and nearby Gloucester, Mass., and to police departments in other cities that have joined the nonprofit Police Assisted Addiction and Recovery Initiative (PAARI).

“We think, we hope, that the data is suggesting that, perhaps, the rate of overdose deaths in Massachusetts is beginning to slow,” Rosenbloom said at the briefing. “If it has, I think one of the principal reasons so far may be the increasing use of Narcan (a form of naloxone) on the street—and the kind of street level intervention that Chief Ryan and his officers, and officers in many departments in Massachusetts, are now using.”

Some hopeful data notwithstanding, Rosenbloom warned of a looming threat: “Fentanyl is coming to neighborhoods like your own and it’s laced with cocaine and heroin.” Fentanyl is an inexpensive synthetic drug that is about 40 times more powerful than heroin.

Rosenbloom described Gloucester’s acclaimed Angel Program: “a social media story” that began with a Facebook post by the police chief on May, 4, 2015, announcing that any addict who showed up at the Gloucester police department, surrendered their drugs, and asked for help would be offered treatment—and not arrested. By the next morning, Rosenbloom said, the post had been seen by more than 800,000 people. (The post would eventually be seen by 2.4 million people in all 50 states and 61 countries and shared 30,000 more times by another 40 million people). Joining with a local pharmacy that would provide Narcan nasal spray for free and with a local hospital for help screening addicts for treatment, Gloucester police launched the program on June 1, 2015.

“There was almost no formal planning,” said Rosenbloom. “The people who were in the business of drug treatment said, ‘What the hell is that guy doing—he’s going to flood us, we should have been planning this for one and a half years.’ I can assure you that if it had been planned for a one and a half years, it never would have happened.”

The program evolved quickly. Nobody ever brought any drugs into the police station, said Rosenbloom, “so anyone who came in and asked for help, they got it.” During the first year, 376 substance abusers asked police for help in getting treatment for a total of 429 times (some people came back for help after relapsing). Most came from the Gloucester area and other parts of Massachusetts, and some from New York, Ohio, and as far away as California.

More than 80 percent were offered—and accepted—treatment, and completed at least the first phase of it, said Rosenbloom, who was part of a team of SPH and Boston Medical Center researchers who conducted an evaluation of the program’s first year. The study was published in the correspondence section of the New England Journal of Medicine in December 2016.

Students at BU’s School of Medicine (MED) tracked down as many of the program participants as they could by telephone, eventually reaching about 62 percent of them. Most agreed to talk to researchers about their experience with the Angel Program—“and that’s very good as studies of this kind go,” said Rosenbloom.

So why did these addicts walk into the Gloucester police station and ask for help? At the briefing, Rosenbloom gave three major reasons:
1) They were aware of the Angel Program. They had heard about it on social media. Their family members had heard about it and pressured them to get help.
2) They believed the program could place them quickly.
3) They believed that police would treat them well.

“It was striking how many people talked about how they had been treated with respect by police—and how their prior experience with their health systems had been so disrespectful,” said Rosenbloom. “They talked of bad experiences going into hospitals and asking for help.”

Gloucester police did their part too, often working around the clock to get people into treatment. “If you have an addictive disorder and you are ready for treatment, you must get it almost immediately—or the opportunity is lost,” Rosenbloom said.

The study also highlighted the failings of the treatment system that took over from the police, such as “poor coordination between detox and treatment providers, and a mismatch between what patients needed and what they were being offered,” said Rosenbloom. “In Massachusetts, our system is still largely based on patient detox. It’s not the most effective treatment for people with opioid disease, but that’s what they had and got offered and they took it. It’s a beginning, not the end of treatment.”

However, Rosenbloom said, “There has been no real effective federal response to this public health emergency to date.” Referring to a federal law that was passed last summer authorizing an additional $1 billion for addiction treatment and prevention to be allocated among states, Rosenbloom said, “A billion dollars is not serious money.”

“The reality is that Medicaid is the only serious, large-scale source of money to treat this,” he said. “We think the country needs to be flooded with Narcan. Immediate access to Narcan saves lives. We’ve seen that.”

Johnson, the speaker from SAMHSA, echoed Rosenbloom’s opinion, telling the Capitol Hill staffers that many experts know what really works. “We just have to make sure we do it, and that we do it across the country,” she said. What works, she said, is “a scientific evidence and public health approach anchored in treatment and recovery programs for individuals and communities.”

In a way, the opioids briefing became a 911 call of its own: an urgent request for funding, in particular funding for Medicaid. “Eighty-five percent of the people walking into the Gloucester program had health insurance, and they had health insurance largely because of Medicaid,” Rosenbloom said. “Medicaid, particularly for young men, is an absolute game changer in our ability to address this problem.”

Republican lawmakers have called for a repeal of the Affordable Care Act (ACA), also known as Obamacare, and deep cuts to Medicaid, which had been expanded to cover uninsured poor people in 31 states and the District of Columbia under the ACA. “If Medicaid expansion goes away, access to addiction treatment will fall dramatically and it will fall quickly,” Rosenbloom said.

For that reason, he said, more than 125 police chiefs from around the country had recently written letters to their Congressional representatives urging them not to take any action that would reduce funding for substance abuse treatment.

“Medicaid matters,” said Ryan, who credited Morrison with coining the phrase in meetings with lawmakers that morning. “That really sums it up. Without the ability to get people’s treatment paid for, these programs are dead in the water.”

Meanwhile, the chief was cautiously hopeful about Arlington’s two-year-old Opiate Outreach Initiative. In 2015 and the beginning of 2016, he said, the town was losing about one person each month to a fatal opioid overdose. In 2017 so far, said Ryan, “in Arlington, Massachusetts, a densely populated suburb of Boston, we have had zero fatalities due to opioid overdoses.”

911 Call on the Opioid Crisis

There are 3 comments on 911 Call on the Opioid Crisis