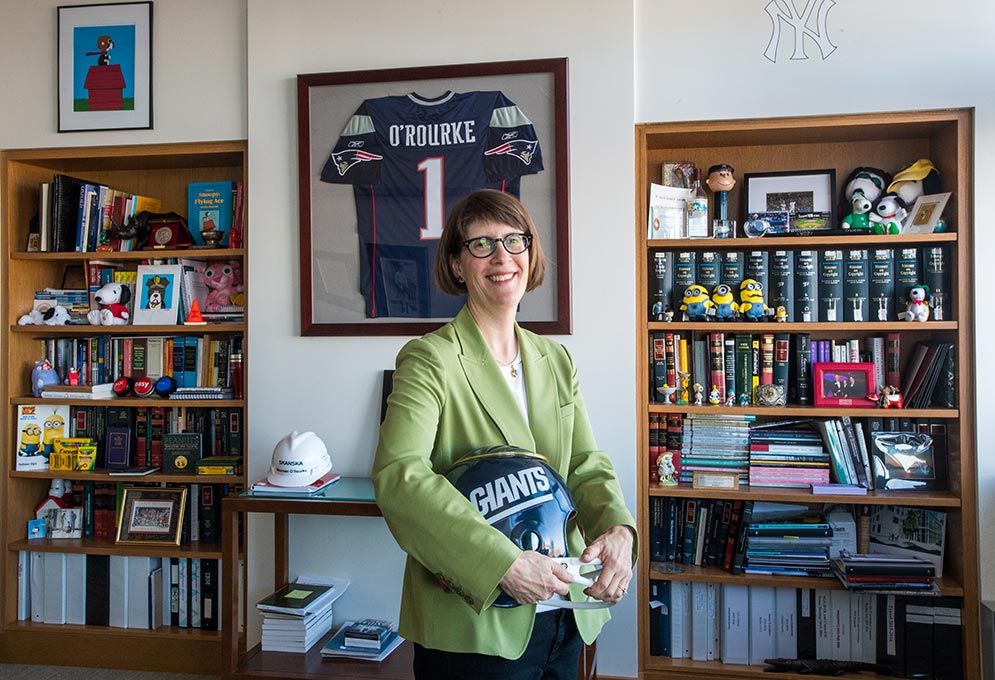 Click on the circles above to see more of what Maureen O’Rourke displays in her office.

When it comes to academics and innovative leadership, Maureen O’Rourke, dean of the School of Law, is anything but frivolous. The National Jurist, a trade magazine focusing on legal education, recently included O’Rourke on its annual list of the 25 most influential people in legal education. And she has won numerous accolades for her oversight of the massive renovation of the Law Tower and construction of the adjoining Sumner Redstone Building.

But when it comes to the décor in her 11th-floor office in the tower, O’Rourke’s playful side is on gleeful display. A survey of its shelves and wall adornments reveal the legal scholar’s love of the Despicable Me minions and all things Snoopy. But front and center is O’Rourke’s love of baseball, particularly the New York Yankees, who were akin to a religion in Poughkeepsie, the city of her birth. A cutout of former Yankees shortstop Derek Jeter dances across one wall.  She’s also a New York Giants fan. The framed Patriots jersey behind her in the above photo,  was, like many of the objects adorning her office,  a gift, and something of an inside joke.

“The Patriots jersey with my name on it was from Richard Karelitz (LAW’74, ’77), who was general counsel for the Kraft group,” says O’Rourke. “I gave him a silver shingle award, so he gave me this. I despise the Patriots.” Spoken like a true Giants fan.

The  Jeter cutout was also a gift. “When you have clearly defined likes it’s easy for people to buy stuff for you,” says O’Rourke, who has some stuff—an immense longhorn sculpture, for example (a gift from students)—that she hasn’t found a place for yet. Ditto the sombrero the size of a kiddie pool.

In our series “Office Artifacts,” BU Today highlights interesting artifacts professors display in their office. Have a suggestion about someone we should profile? Email orourkej@bu.edu.

There are 2 comments on Office Artifacts: Maureen O’Rourke