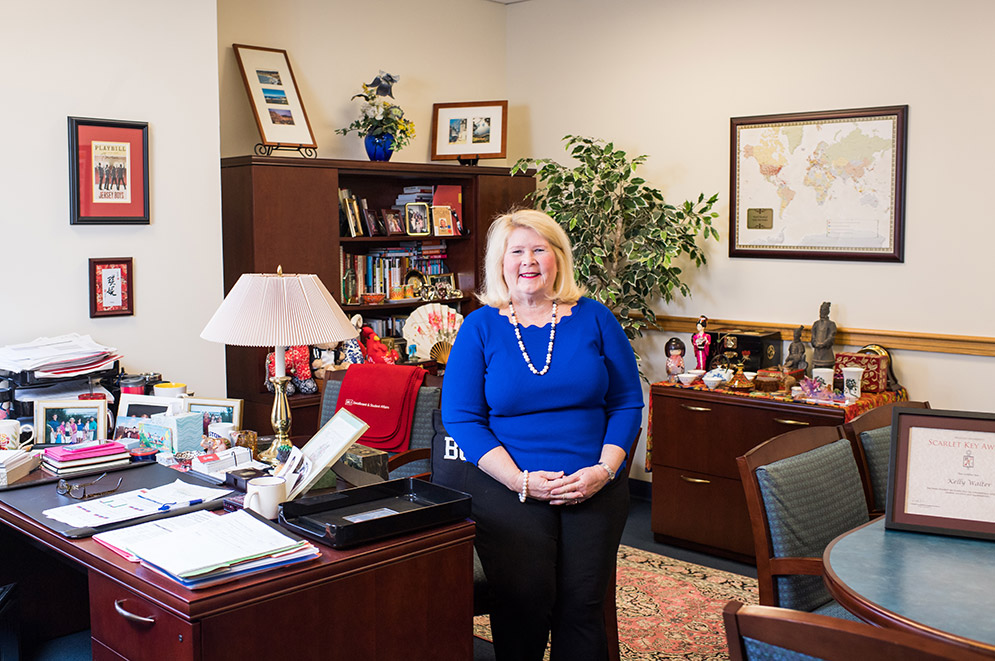 Click on the circles above to see more of what Kelly Walter displays in her Commonwealth Avenue office.

Kelly Walter traveled the world 95 days last year for her job as BU’s associate vice president for enrollment and dean of admissions. Her office, overlooking the Charles River, is filled with souvenirs from her travels to 6 continents (she swears she’ll get to Antarctica one day), nearly 60 countries, and 47 states.

“I think this job has given me a personal as well as a professional awareness of different cultures, nationalities, value systems, educational systems,” says Walter (SED’81). “I think it’s made me more open-minded, and less ethnocentric. That’s what happens when we are in our own siloed world in the United States. The reality is there are lots of other ways to look at the world, society, and what we value.”

Hanging on her wall are five large magnet boards with a special backstory. When Walter’s four nieces were little, she started collecting magnets so she could show them where she was traveling.

Today, the 379 magnets represent 30 years of travel for both business and pleasure. She has an Arc de Triomphe to remind her of Paris, a palm tree that helps her think of Hawaii. “You know the Dr. Seuss book, Oh, the Places You’ll Go! It’s a virtual interpretation of that,” she says.

When she looks at the boards, Walter can remember what she was doing in the city, the people she has met. The magnets also serve as an icebreaker when she meets with students. “When they’re in my office, they can be a little nervous,” she says. “They think, I’m going to meet with the dean of admissions, what do I say? And they look up there and see a magnet from Dubai or Sydney and say, ‘Oh I’ve been there,’ and it’s a great way to start a conversation and put them at ease.”

Walter has worked in admissions and enrollment for 37 years. After graduating with a bachelor’s in psychology from the University of Vermont, she earned a master’s in counseling psychology at BU’s School of Education, and then started working as an entry level admissions counselor at BU. “I think I’ve done every job in this office,” she says. “I did leave BU for a couple of years. I always say I defected and went to Wellesley for three years. But BU drew me back and it’s been an amazing journey.”

There are 3 comments on Office Artifacts: Kelly Walter