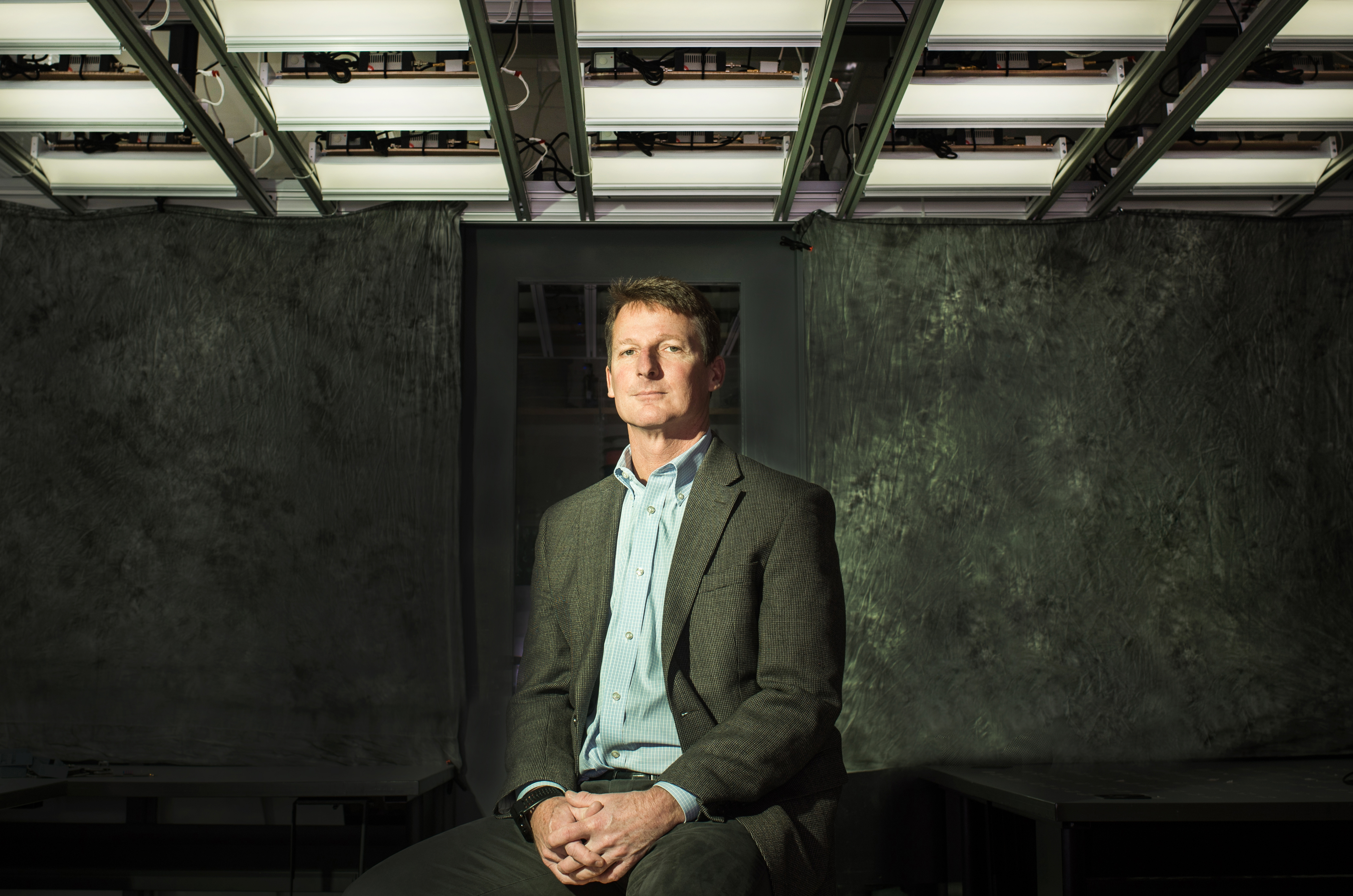 Thomas Little, professor of electrical and computer engineering and associate director of the Center for Lighting Enabled Systems & Applications (LESA), in his laboratory at the BU Photonics Center.

Imagine sitting in a secluded corner of a college library, working steadily on a last-minute paper. Just as you reach the concluding paragraph, summing up your argument, the lights go out, forcing you to get up and wave your arms around. In an energy-efficient room, the lights may be controlled by motion sensors that only turn on when they detect that someone is moving. However, if everyone, like you, is quietly working, the lights can’t register their presence, which doesn’t always serve the students well.

Now, a team from the Lighting Enabled Systems & Applications Engineering Research Center (LESA ERC)—a combined effort of Boston University, the University of New Mexico, Thomas Jefferson University, and Rensselaer Polytechnic Institute (RPI) faculty and graduate students—is tackling the problem. Funded primarily by the National Science Foundation, the center researches and designs smart lighting: lights, sensors, and controls that can adapt to better support human productivity, energy efficiency, and wellness. In September 2016, the team was awarded a US patent titled “Sensory Lighting System and Method for Characterizing an Illumination Space” for a system of LED lights and sensors that can detect the location and poses of occupants in a room without using cameras. While occupancy sensing is not a new idea, the innovation is to interpret the reflected light in a room using low-cost sensors built into the lights, without using cameras.

“The lights in a space are strategically located,” says Thomas Little, a BU professor of electrical and computer engineering and associate director of the LESA ERC, referring to his office overhead lights. “They’re in a good position in these indoor environments to interact with us.” Rather than completely overhauling lighting design, Little wants to make what’s already there smarter. He and his colleagues have been working on a system of responsive LED lights called luminaires, which they have designed to be energy efficient, increase productivity, and improve health by responding to the needs of people in the room. Sensors embedded in the luminaires, called “time-of-flight” sensors, can detect people and objects in a room and change lighting intensity, turn lights on and off, and even adjust color. For example, the system could change the balance of red and blue light to mimic sunlight in a room without windows, rather than relying on fluorescent bulbs.

The sensors measure location by emitting a brief pulse of light and timing how long it takes that light to reach the people and objects in the room, a process that is also used in some types of radar or sonar. By combining time-of-flight data from multiple sensors throughout a room, it is possible to differentiate between people, pets, and furniture, and to classify actions such as sitting, standing, or writing at a whiteboard. As an example, a speaker giving a talk at the front of a classroom could use arm movements to change the lighting settings in the room or to advance the pages of a PowerPoint presentation.

Because the new sensors don’t record images, the scientists hope that they can allay privacy concerns that may come with using cameras. The sensors do collect short-range location data, or the distances to objects or people in the room, and this “indoor GPS” function has some privacy implications. However, the sensors would be safe to install in areas where recording is already prohibited, such as bathrooms and other private spaces. According to Little, one of the eventual goals for smart lighting is to maximize lighting efficiency by anticipating the lighting needs of individual people. For example, specific routes in a building could be illuminated to provide light and guidance as necessary. An office worker could someday come to work, leave her car in the parking garage, and make her way to her cubicle in a high-rise office with lights turning on before her and off behind. In this way, the lights are only using energy in the time and place that they are needed.

LESA ERC collaborators have placed the patented lighting in two experimental rooms: a smart conference room at RPI and a smart hospital room at the center’s site at the University of New Mexico. In addition to studying efficiency, researchers hope that the luminaires can improve human health. Certain kinds of depression, such as seasonal affective disorder, and circadian rhythm disorders can improve with exposure to different levels of light, according to the Mayo Clinic.

“The increasing body of clinical evidence suggests that blue light is critical for maintaining the human circadian rhythm,” says Little. The sun produces blue light to help us wake up, but exposure to blue light after dark might have harmful consequences, such as disrupting our sleep schedule and mood. (There is even an industry now that produces blue light filters for computer screens, purporting to relieve eyestrain and improve sleep.) LESA ERC’s luminaires could help regulate hospital patients’ exposure to blue light to better replicate natural daylight, which is one of the effects currently being studied at the center.

LESA ERC’s patented lighting system has the potential to change the landscape of smart lighting, and the researchers are exploring commercialization opportunities. Right now, we rely on passive sensors that don’t respond to human needs. “If I sit at my desk and I don’t move, after 15 minutes the lights go out. All the offices are like that,” says Little. But in the quickly approaching future, a “smart building” with responsive luminaires could turn on the lights for us, set themselves up for our school or work purposes, and maybe even make us healthier while they do it.