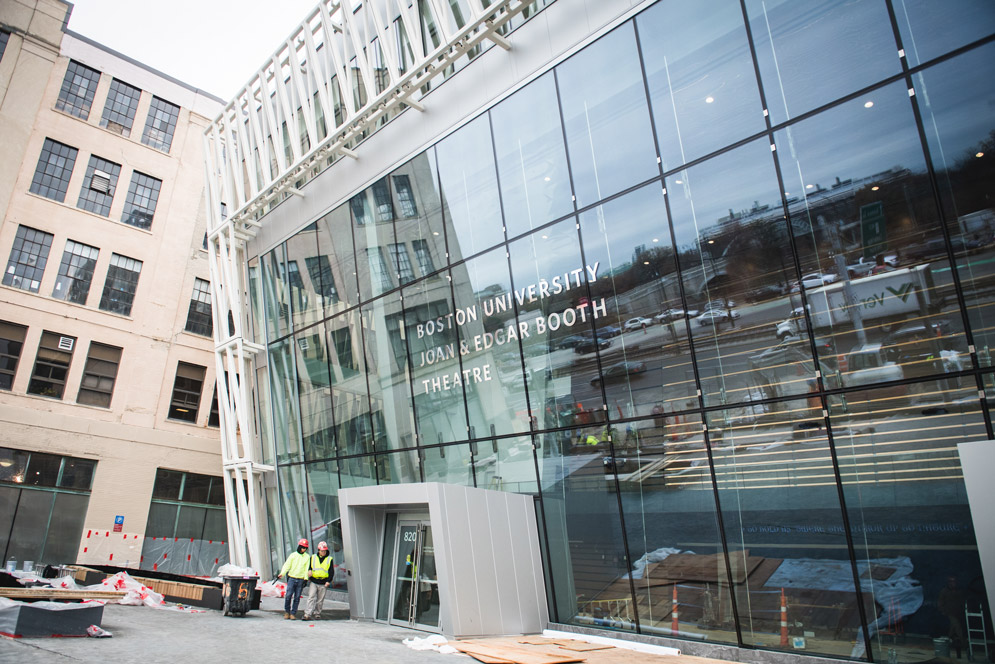 A quote from Hamlet long adorned the stage arch of the old BU Theatre: “To hold, as ’twere, the mirror up to nature…”

When the design process of the new Joan & Edgar Booth Theatre was under way, Jim Petosa, director of the College of Fine Arts School of Theatre, asked that the quote be incorporated.

The quote “meant something to our community,” Petosa says. “It’s a testament to our philosophy of what the theater is. And it reflects the aesthetic of the building itself, with its tilted facade, which reflects the life of the people in the plaza and on the sidewalk.” So the quote is now inscribed above the door leading into the new theater.

Today marks the official opening of the Joan & Edgar Booth Theatre, which adjoins the College of Fine Arts Production Center. CFA is hosting a housewarming for the community today at the theater from 4 to 7 pm.

The 75,000-square-foot state-of-the-art theater complex, designed by Elkus Manfredi Architects, has a 250-seat theater, production and costume shops, design labs, classrooms, faculty offices, and a landscaped plaza. It is the first time in decades that CFA performance and production students have been housed in the same location.

The building at 820 Commonwealth Avenue—just across from CFA—was funded in part by the University’s 2016 sale of the BU Theatre, the longtime home of the Huntington Theatre Company. It was also where BU theater design and production students and faculty worked with Huntington staff to create scenery, props, and costumes, and acting students would occasionally perform. The new building also benefited enormously from a $10 million gift from BU trustee Steve Zide (LAW’86), who gave it in honor of his wife’s parents, Joan and Edgar Booth.

“It is exciting to have this new state-of-the-art theater as the centerpiece for the role that the students and faculty of the School of Theatre play in infusing the arts into our campus,” says Robert A. Brown, BU president. “We are honored that the theater bears the names of Joan and Edgar Booth, honoring the parents of Janet Zide. The gift from Janet and Steve made the theater a reality.”

Petosa, who is also a CFA professor of directing and dramatic criticism, says that in many cases, a new building stimulates the growth of a program, but in this case, CFA grew the program and then built a building to house it. He applauds Elkus Manfredi for delving into how School of Theatre students work, and then shaping the building to accommodate their needs. “They designed a building that utterly supported the excellence of the program,” he says. “It’s like moving into a home that you have kind of lived in, hypothetically, but are now supported by the reality of a suitable home that reflects the values and the programs that inhabit it.”

The Booth Theatre was designed for various configurations, with seating risers, a trap door, and motorized trusses for lighting and scenic elements. “From an architect’s perspective, it’s like going from 2-D to 3-D,” says architect Ross Cameron, an Elkus Manfredi senior associate. “Instead of looking through the proscenium at something, it can be all around you. You can have a theater in the round, a runway, an end stage. It’s really a highly technical, flexible space.”

Audiences will appreciate the theater’s capabilities in February, when its first production, Eugene Ionesco’s Rhinoceros, will be directed by Clay Hopper (CFA’05), a CFA lecturer in directing and theater arts and a Boston Center for American Performance artistic associate. Hopper says he can’t think of a better play for the space. “The design team and I have been working to do justice to the play and to show what this theater can do,” he says. “It’s an innovative space, and what we’re excited about is how to utilize all its different capabilities. I’m really excited to do this play there.”

In April, Yo-EL Cassell, a CFA assistant professor of movement and a Commonwealth Shakespeare Company former resident choreographer, will direct the new School of Theatre initiative InMotion Theatre, which highlights storytelling through the lens of movement.

The Booth Theatre “playing space is literally a director’s dream,” Cassell says. “It can transform its configuration to inform and inspire the intent of the production.”

School of Theatre assistant director McCaela Donovan says the new Joan & Edgar Booth Theatre and CFA Production Center is a huge asset in recruiting students to come to BU and helps the college stay among the top-ranked drama schools in the country. “We’ve already seen a bump in applications, and that will just continue as applicants tour the building and see productions in the space,” she says. “It’s stunning, state-of-the-art. We’re excited that the administration sees how integral the arts can be.”

WATCH: Jim Petosa, Director of the Boston University CFA School of Theatre, talks about the purpose-built design of the Joan & Edgar Booth Theatre and the College of Fine Arts Production Center. 👏

Join us for our housewarming event on Thursday, 12/7 from 4-7pm at 820 Comm Ave! Learn more at www.bu.edu/cfa/booth

The College of Fine Arts created this promotional video for the theater’s debut.

The College of Fine Arts invites the BU community to preview and tour its newest spaces, the Joan & Edgar Booth Theatre and CFA Production Center, 820 Commonwealth Ave., on Thursday, December 7, from 4 to 7 pm. The event is free; RSVPs are encouraged but not required. Find more information here.

There is 1 comment on New Joan & Edgar Booth Theatre Opens