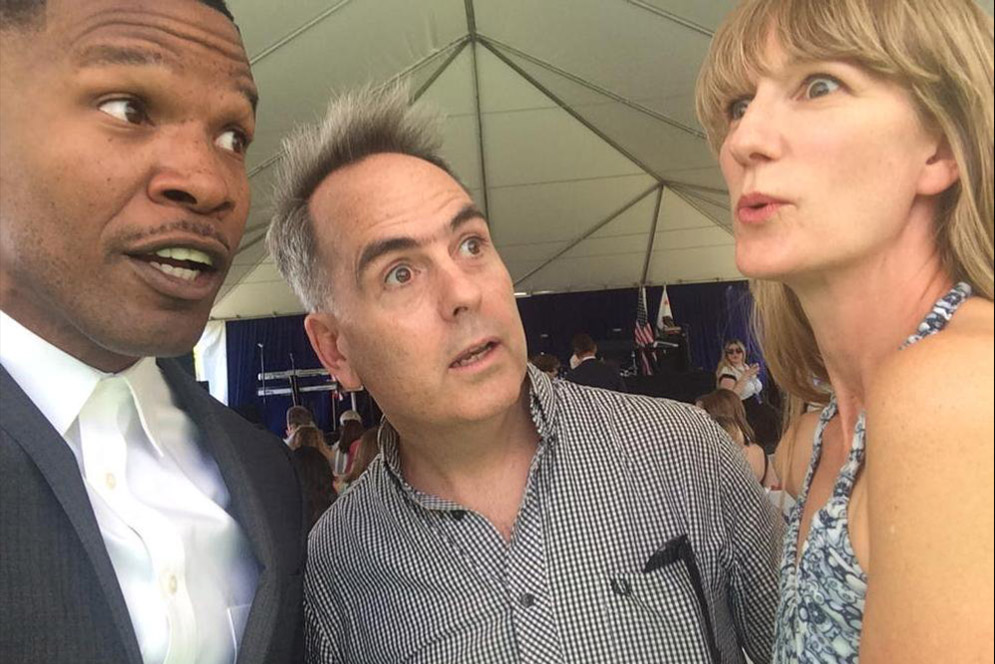 Donick Cary (center), with his wife, Kim Huffman Cary, and actor Jamie Foxx at a fundraiser for President Obama. Cary and Foxx pitched a TV show together about the crazy staff at a crazy hospital, Cary says, but no one bought it. Photo courtesy of Donick Cary

You may remember him from such roles as Guy in the Bear Suit on the Late Show with David Letterman and Party Guest in the 1993 drama Rift.

Not ringing any bells?

Donick Cary (CGS’88) might have the on-screen résumé of someone waiting for their big break (and waiting tables), but behind-the-scenes, he’s big time. A comedy writer with an enviable filmography, Cary has eight Emmy nominations and one win—a Primetime award for The Simpsons. As well as providing scripts for the residents of Springfield, he’s penned gags, sketches, and joke-packed episodes for the Late Show with David Letterman, Parks and Recreation, and Silicon Valley. Along the way, he’s produced a bevy of hits and created his own, Comedy Central’s late 2000s satire, Lil’ Bush: Resident of the United States. Cary also played a role in devising one of reality TV’s biggest smashes, The Osbournes.

His break came after just two years at BU. Cary finished the College of General Studies with his savings exhausted and little idea of which BU school to enter. Internships seemed a good way of figuring out the right path. His first shot—an office job—didn’t fit the bill, but he struck gold with his second internship, on what was then NBC’s Late Night with David Letterman.

Growing up on the island of Nantucket, Cary was an early David Letterman fan, staying up into the night to watch the comedian’s show and acting out highlights in school the next day.

“I got on the Letterman show and I saw what the writers did there and it seemed like, oh, that’s me in eighth grade screwing around all day, and then it goes on TV. I could do that.”

Cary left BU in 1988. He did two consecutive internships on Late Night with David Letterman before landing a job at HBO, writing for the newly launched Comedy Central. Within a couple of years of that first internship, he was back at Letterman, this time on the payroll as a writer’s assistant. He would spend more than five years on the show—in its NBC (Late Night) and CBS (Late Show) iterations—writing more than 250 episodes, some as the head writer. He was also the protagonist of a Letterman skit that threw a cast member in a bear suit into real-world situations: Can a guy in a bear suit hail a cab?

“When Nirvana broke, they came on. When Goodfellas was on, Martin Scorsese came on. You were right in the center of what everyone was talking about.”—Donick Cary about Letterman’s show

“Dave is not a guy who is satisfied easily. He always expected us to try and figure out how to reinvent the talk show. That did not make it easy always, especially after the show had been on for 10 years and material had been on every night,” says Cary. “It was really a valuable place for me to start because you could do a bunch of different kinds of writing there.”

The writers on Letterman had to craft jokes and sketches, even reality skits for everyday people and celebrities: Barbara Bush (Hon.’89) was sent out to see if she could get a free hot dog from a New York City street vendor (she could).

“And then you were just exposed to everybody, everything that was happening. When Nirvana broke, they came on the show. When Goodfellas was on, Martin Scorsese came on. You were right in the center of what everyone was talking about. It was a great education that way,” Cary says.

After Letterman, he joined The Simpsons for four years, writing a handful of episodes and working as an executive producer. He then racked up writing, consulting, production, and bit-part acting credits on several programs and movies, including The Osbournes. For his own show, Lil’ Bush, he even lent his vocal talents to the character Lil’ Cheney.

In 2015, Cary signed an overall deal with CBS. “Whatever the studio I’m working for is doing, they can have me stop in and help out.” So far, he’s provided his expertise to The Odd Couple, starring Matthew Perry, and a couple of pilots, including a detective series with an offbeat twist.

“It is a dark, animated, noir cartoon about a rhinoceros detective on Noah’s Ark,” he says of Ark City Jazz. “We were working on a script and hoping that turns into something interesting. It’s fun though. Fun and weird.”

Alongside that, he’s got a passion project in the works: a pilot for Amazon called Big in Japan. It’s based on an American actor friend of Cary’s who decided to take a shot at landing parts in Japan’s traditional Noh Theater, where ancient tales are told through a blend of music and dance.

“He’s a white guy, so it’s very hard to break into an ancient Japanese art form,” says Cary, “and to pay the bills, he started doing some commercial work. And he was cast as all these sort of racist versions of what white people are like.”

His friend became a star. When Cary visited, passersby would snap photos of the actor and shout, “Oh, Superman! Superman!”

Big in Japan, he says, is “really an excuse to explore all the different levels of Japanese culture”—and bag a few trips overseas.

Ark City Jazz “is a dark, animated, noir cartoon about a rhinoceros detective on Noah’s Ark.”—Cary

It’s not uncommon for ideas to bubble up from personal experiences. Another pilot—waiting for a green light—is based on a time Cary lost a girlfriend, and then when he tried to reignite the flame, found out she was dating a member of U2. “It’s very hard to compete with Larry Mullen, Jr.,” says Cary. The planned show is “about a guy whose wife leaves him for a popular somebody.”

Cary’s career is also swerving into the serious. He’s directing his first feature-length documentary. The film, which has the working title Bad Trip, features interviews with celebrities such as Ben Stiller (whose Red Hour production company backed the film), Sting, Sara Silverman, and Anthony Bourdain.

“The initial goal was, if you sat down at a dinner table with 10 friends and you all shared your tripping stories, that’d be a pretty entertaining evening,” says Cary. Although the film includes reenactments of some of the craziest hallucinogen-inspired tales, he says it has somber moments, too: examples of lives changed for the worse and explorations of the subconscious mind.

In the meantime, he has just one other project to add to the list—one not destined for the screen. Cary is the founder and president of Musack, an organization that provides musical instruments and lessons to schoolkids. In 2008, during a trip back to Nantucket, Cary spoke with teens about a recent spate of suicides. He decided to hold a fundraiser, reuniting his high school band and raising money to buy guitars for local music programs. What started as an impromptu gig funding 10 guitars on one island has grown to a nonprofit that sends instruments to Appalachia, Haiti, and Los Angeles. At the 2016 fundraiser—billed as the Rock ’N’ Roll Carnival and featuring more than a dozen artists and comedians—Musack raised enough for hundreds of guitars.

Guy in the Bear Suit

There is 1 comment on Guy in the Bear Suit