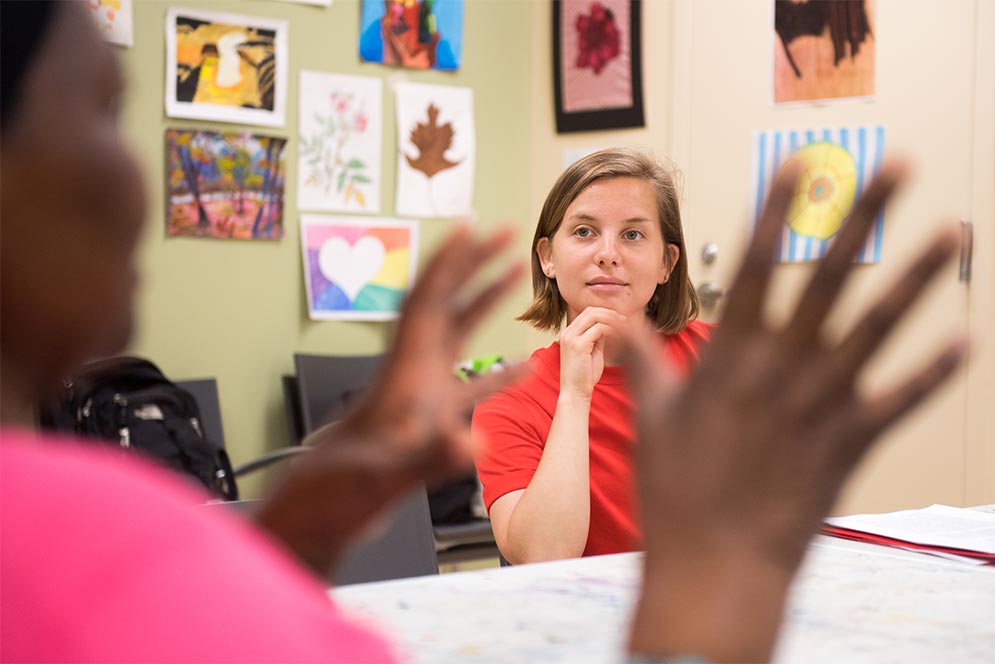 Teaching philosophy at shelters? Clarinda Blais (CAS’17) founded a student group that does just that. Photo by Cydney Scott

A gorgeous June morning is not a day shelter’s biggest drawing card. Nor, you might think, is a philosophy class. Yet in the tiny arts room of the Women’s Lunch Place, nestled under a church amid the tony stores and restaurants of Newbury Street, Clarinda Blais has enticed three shelter visitors to ponder Aristotle’s reflections on happiness.

The Women’s Lunch Place offers nutritious meals, shower and laundry facilities, and beds for a safe place to nap. With clients’ colorful artwork on the wall as backdrop, Blais (CAS’17) asks people’s reactions to a line from the Greek philosopher: “Every art and every inquiry, and likewise every action and choice, seems to aim at some good; hence it has been said that the good is that at which all things aim.”

Soon, the musings of a thinker who’s been dead more than two millennia, and Blais’ gentle prodding of folks back to the text, compel the women to open up about happiness and unhappiness in their own lives. Velma, a former teacher, recalls how her brother lavished gifts on relatives. “He gave and gave and gave and gave, but he never focused on him.…He stressed himself out by helping them. And they came to his funeral and everything and they talked about how good he was and all that. But he’s there, dead, at a young age, from the stress of doing good, I say. So that’s a dark side.…He was trying to make up for what he didn’t get in his life” from their troubled mother, who “was letting the men beat her up, having babies by the men.…Where was my mother mothering me?”

Ady recounts how her family dumped full responsibility on her for caring for a cancer-stricken relative. “It was so controlling,” she says. “When I was reaching out and trying to get help, people would say, ‘You’re doing that because you’re an ass—-.’”

Not all comers are hooked by the discussion. A woman with a cane walks in after the class starts and lingers about 10 minutes, peppering Blais with a candid tongue (“I don’t even understand what this class is about. I think it should have a topic.”) and good-natured questions (“Are you gonna be a psychologist?”), and then ambles out, shaking Blais’ hand, her parting words: “She’ll do good. I’ll pray for you.”

“Having a philosophy class is another way to learn about yourself and learn about the world….women who spend all day worrying about if they’re going to have a bed tonight, will they get their clothes washed, having to worry and struggle with their necessities or basic rights—it’s a relief to get away from that.”—Elizabeth Keeley, Women’s Lunch Place director

Blais stays cheerful throughout, having run these hour-long discussions through her Free Philosophy Project at the Women’s Lunch Place for two years, since she was a College of Arts & Sciences sophomore. The project has also recruited BU and Harvard students to conduct similar classes at a dozen shelters in Boston and Cambridge and has benefited from $5,000 in funding from BU’s philosophy department, used to cover supplies—pens, notebooks, handouts, and sometimes doughnuts (a helpful lure for attendees, Blais says). She is now seeking grants to make the project a sustainable nonprofit, aided by publicity from a recent Washington Post story about her efforts.

That latecomer’s meh is not shared by the other women, who say they enjoy Blais’ presentation. “I learned how you can listen to us, with this stuff, and then put it into perspective,” says Velma. Turning to Blais, she says, “You’re going to do great with that PhD,” a degree that the Terrier aspires to someday.

That’s music to the ears of a woman growing up in rural, central New York, who had been bored by “a really, really bad public high school” with a deficit of advanced classes. Once at BU, she sampled a philosophy course and found herself “growing not only academically but personally. I was writing and reading and engaging in conversation in ways I never thought I could. I was never bored again.”

The intellectual lifeline of philosophy

Another thing that grabbed her attention was homelessness, which had been invisible throughout her rural upbringing. During sophomore year, Blais volunteered in the kitchen at St. Francis House, a downtown Boston shelter, where she served meals. But “you don’t learn anything about the population,” she says. “You’re just putting eggs on a tray and saying, ‘Thank you, have a good day.’” Observing the meeting room where people watched TV and waited for appointments, she saw the same lifeless boredom she’d felt in high school. Might philosophy be the intellectual lifeline for others that it had been for her, she wondered.

BU’s philosophy department gave her a small seed grant. Blais spent two months pitching the idea, in person, by phone, or by email, to more than 70 shelters, where the two-part response was usually (a) surprise and (b) no, thanks.

Blais describes the reactions: “‘Sorry, we really don’t think this program is a good fit for our shelter.’” She was on the verge of giving the philosophy department its check back in 2015 when she left one last message, for Women’s Lunch Place director Elizabeth Keeley, who had majored in philosophy herself at Boston College. Keeley called back and offered her a trial class that summer. Blais arrived hours early to set up, plagued with doubts. “I’m like, what are you thinking? I was 19 at the time, and I knew very little about philosophy or life. And I would be sitting with women who would be mostly twice my age and had had experiences far different than my own.”

At that first discussion, she confessed that she knew nothing about homelessness and wanted to learn from the women. Then she unfurled Aristotle’s thoughts on happiness. To her delight, the women asked questions, took notes, and consulted the reading packets she provided. In the following week, they emailed her questions about the topic and the text. Afterwards, Keeley’s vouching for her opened formerly closed doors at enough other shelters that Blais recruited fellow philosophy students at BU and Harvard to form the Free Philosophy Project.

“Having a philosophy class is another way to learn about yourself and learn about the world,” says Keeley, whose shelter offers other classes, including writing and meditation. “It’s about building trust, it’s about feeling comfortable and safe with someone. And Clarinda is so easy and so welcoming and so receptive.”

“People sometimes take to one or two extremes about homelessness. Either ‘Oh my God, I feel so bad for these people’…or ‘Yuck, they’re disgusting’….I don’t think about them as ‘these people,’ because these are my friends.”—Clarinda Blais (CAS’17), Free Philosophy Project founder

Wrestling with great philosophical questions is a way for the shelter’s users to step out of their difficult world, if only for an hour, and build confidence in themselves, Keeley adds. “When we get outside of ourselves and think of things…not just focused about our own immediate needs, it helps to put our being, our existence, into some context. And women who spend all day worrying about if they’re going to have a bed tonight, will they get their clothes washed, having to worry and struggle with their necessities or basic rights—it’s a relief to get away from that.”

Blais says discussions aren’t always as civil as that day with Velma and Ady might suggest. She recalls a talk at St. Francis House last spring on nonviolent protest and Martin Luther King, Jr. (GRS’55, Hon.’59). A regular participant—a native Haitian and a natural contrarian, Blais says—demanded, “Why do all white people assume that black people like Martin Luther King, Jr.?” That angered a white participant, who suggested the first woman go back home.

The Haitian “really hates white people, and she’s very straightforward about that,” says Blais, who averted a race riot by shifting the discussion back to King and his hero, Mahatma Gandhi. (Great philosophers make nifty scapegoats, she’s learned.) Yet combustible topics are precisely what philosophy should address, she says: “I always tell the students that I’m training…the more uncomfortable a question asked you, the more it probably means you should be asking it.”

The wall between her privileged life and the tumultuous lives of her discussion participants is too high for some, who say, “‘Screw you’ and they leave,” she says. But counterintuitively, some people’s resentment makes them sit down and interact with her. That Haitian woman, for one, leaned on another woman, who’d shunned Blais, to give the group a try, telling the holdout that the discussions were more about the women’s thoughts than Blais’.

And the teacher has indeed learned from her students.

“People sometimes take to one or two extremes about homelessness,” she says. “Either ‘Oh my God, I feel so bad for these people, and I give them all my pocket change,’ or ‘Yuck, they’re disgusting, they don’t have a job, that’s their fault.’” Both extremes are wrong, she says: on the one hand, “I don’t think about them as ‘these people,’ because these are my friends. They’re like ‘my people.’”

On the other hand, talking to the women has taught her not to romanticize the homeless. “Any homeless person will tell you that if someone is on the street begging for change for food, they probably don’t want your money for food or to get a home. So I will never give a homeless person money. I’ll stop and talk to them and say, ‘Do you know the shelter’s serving lunch at this time, and this is how you can get there.’”

Teaching Philosophy to the Homeless

There are 6 comments on Teaching Philosophy to the Homeless