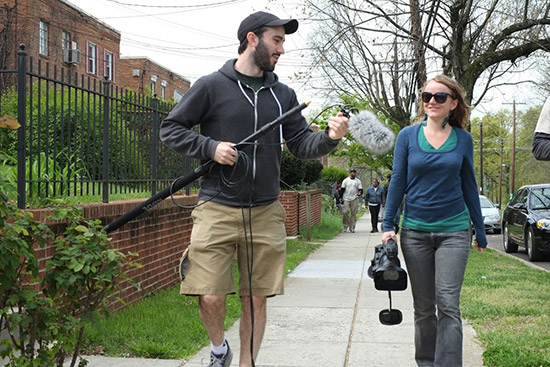 It’s a surprising admission from a filmmaker who has spent much of the last six years pouring his heart, soul, and cash into his first documentary feature, City of Trees, a film about a nonprofit in Washington, D.C.—Washington Parks & People—that aims to reduce poverty and violence in local neighborhoods by improving parks. The documentary traces the challenges the organization faces as it goes about training and hiring 150 long-term unemployed residents for a new job-training program planting trees.

City of Trees was broadcast on PBS/World Channel’s America Reframed and has screened at several film festivals across the country since it premiered in 2015. Kramer will show the film on campus tonight as part of the BU Cinematheque series, the College of Communication program that brings accomplished filmmakers to campus to discuss their work.

“I came to BU with a love for filmmaking and knew I wanted to be a filmmaker,” says Kramer (COM’09), whose degree is in film production. “But I didn’t know that documentaries were going to be the way to channel that energy.”

Kramer directed City of Trees, and his journalist brother Lance was the producer. The Bethesda, Md., natives are partners in the Washington-based documentary production company they founded, Meridian Hill Pictures.

The documentary introduces viewers to several of the residents who join the job-training program. For many it’s an opportunity to rebuild their lives. But the film also shows how a program that in theory sounds relatively straightforward—putting people to work by planting trees and improving parks—becomes mired in urban politics, community tensions, and race relations.

Kramer says he’s looking forward to talking to COM students about the importance of films that address the complexities of American life and the financial challenges of making them. “I’m not going to sugarcoat it,” he says.

BU Today spoke with Kramer about how he got started as a filmmaker, how he launched his own documentary production company, and whether documentary filmmaking can be sustainable.

BU Today: If you didn’t take classes in documentary filmmaking at BU, what did you study here?

Kramer: I feel like I created my own documentary major at BU. I studied film production and my liberal arts concentration was in cultural anthropology. I really appreciated how they were not just classes in “here’s the nitty-gritty of how you run a camera” or “here’s how you use all the aspects of Final Cut Pro.” I mean, we learned that, but what I learned was really how to use this medium to challenge people, to really dive into the complexities and the nuances and the unknowns of what it means to be human.

You’ve said you learned some of your biggest lessons outside of class.

I felt the school helped put me in a position where I was preparing not just to tell a story and work a camera, but also to think about being entrepreneurial and resilient and nimble and creative. Being in the center of a city, with lots of opportunities but not coddled, my BU experience taught me that what you put in is what you get. I’m grateful for that independence.

You got your first paid filmmaking job while at BU, is that right?

I got my first camera while I was there, and my first freelance gig. I was shooting Election Day 2008 in Roxbury for an independent documentary about the election of Barack Obama, filming in a mostly black community as people were coming out of the polls. I remember I got $100 for that shoot, and that was like the biggest deal in the world to me.

The only reason I got the gig was because I was living in a group house in Brighton with another documentary filmmaker, named Sean Flynn. Filmmaker Valery Lyman was a friend of his, and he handed me that first gig on her short One of These Mornings. It was an incredibly important and empowering moment for me. It didn’t come through BU. My professor didn’t do it for me. But you end up in these situations where little doors are opened for you, and you have to take advantage of them. And that’s a very critical skill for being able to make a career out of this work.

What did you do after graduation?

I moved to New York and had two internships simultaneously. One was with an arts nonprofit called the Story Pirates, teaching young people in schools how to write stories and adapt them into theater productions and short films. And the other was with Magnolia Pictures, the independent film distributor, on the business end. And very quickly I found myself working overtime at Story Pirates and cutting back my hours at Magnolia.

After that, I got a job with the John F. Kennedy Center for the Performing Arts in Washington, teaching middle school students in low-income communities how to make a documentary. Somehow, I got the job having never made a documentary. By teaching them how to do it, I learned how to do it myself. It also helped me learn how to communicate and empathize with people who were living really different lives than I lived.

How did Meridian Hill Pictures get started?

Lance and I came back to DC and decided, let’s start a production company. We’re fourth-generation Washingtonians. We didn’t just want to make films here. We wanted to be part of the community.

When we moved into the Josephine Butler Park Center, which was run by Washington Parks & People, the executive director, Steve Coleman, said, “Our organization just received this major stimulus grant to create a green job training program for long-term unemployed D.C. residents.” My brother and I really wanted to sink our teeth into a long-form film where we could follow a story over multiple years. We started working on City of Trees with Kartemquin Films in Chicago, the producers of Hoop Dreams. They were basically my second BU.

Washington Parks & People had an incredible opportunity to create this program, but it was also a huge challenge. And it gave us this amazing window into the struggle the whole country was going through with the recession, and an attempt at solving that problem through a small group of people’s lives in our hometown, and so we dove in.

This is something I really want to talk about with the students at BU. It’s been an incredibly difficult process to figure out how to make this work sustainable. City of Trees got rejected by every single major documentary grant out there, three or four times. We had to really think about alternative ways of funding the work. We got grants from environmental foundations. We did a Kickstarter campaign. And we went into debt. I find myself really reflecting on how my brother and I can help the field learn how to be more sustainable and thriving.

The work is that important?

Independent artists and storytellers are needed at this moment more than at any time. We live at a time and in a world where stories being told are so polarizing and not grounded in the nuance and complexity of people. Independent storytellers will often have the freedom to tell those kinds of stories, so people in this country can start building bridges with one another, empathizing and learning about one another, at a time when no one seems to be listening.

Brandon Kramer speaks and screens his film City of Trees tonight, Friday, March 17, at 7 p.m., at the College of Communication, Room 101, 640 Commonwealth Ave. The event, part of the BU Cinematheque series, is free and open to the public.

View a trailer for City of Trees here.