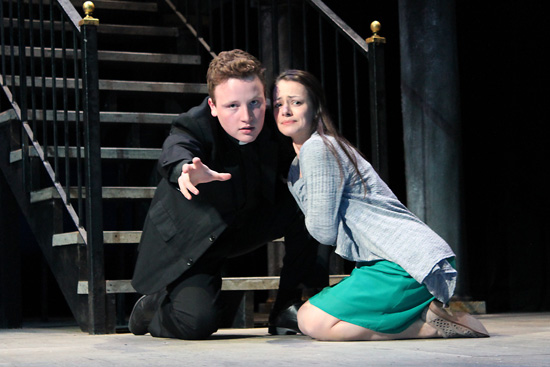 In CFA’s production of ‘Tis Pity She’s a Whore, the Friar, played by Jack Lavey (CFA’19), persuades Annabella, portrayed by Maddie Sosnowski (CFA’17), that since she is pregnant with her brother’s child, she must marry one of her suitors.

Incest. Rapier duels. Spies. Poisoned wine. Daggers to the heart. English Renaissance dramatist John Ford’s ’Tis Pity She’s a Whore is a moral roller-coaster ride that debuted in a bitterly divided 1630s England, one of the last productions before Puritans shuttered the country’s theaters in 1642.

Mark Cohen has wanted to direct the pre-Restoration period tragedy for decades, seeking just the right opportunity and mix of young actors. Events finally converged to make that possible. The College of Fine Arts assistant professor of acting helms a CFA production that begins tomorrow at the Calderwood Pavilion Wimberly Theatre at the Boston Center for the Arts and runs through February 25. He says the play is timeless and he hopes the tragedy provokes thought and discussion about the increasingly divided nation we live in today.

“It’s an incredibly contemporary play, scarily, horrifyingly modern. It’s a play that says, here’s what’s left when everyone else has argued themselves into inertia,” says Cohen, who has seen the play performed only once, in a London production years ago starring a then-young Ian McKellen.

Set in Parma, Italy, with unmistakable Shakespearean roots, the plot is a dizzying tale featuring a brother and sister who confess their deep love for each other, the sister’s subsequent pregnancy, which leads to a marriage of convenience, and the husband’s plan for vengeance, which dovetails with another character’s plot to murder the husband. A Friar hears it all in confession, and a progression of sinister and clueless characters are woven throughout, including the requisite village simpleton. A surfeit of poison and daggers and torture adds to the suspense and mistaken identities. The play manages to generate sympathy above all for the incestuous lovers, the least blameless among the many characters.

“It’s a play where positive value exists only in an incestuous relationship between a brother and sister, and we’re meant to feel positively about them when we see all this corruption and craziness around them,” says Cohen, who updated the play to a more contemporary Parma and cut the script to two and a quarter hours, with one intermission. “I love this play, which is about people’s vulnerability to raw power.”

He says the play is a good fit for CFA’s current ensemble of acting majors. “One of the things that is true of perhaps most actors is that they have a curiosity about the full range of human experience, including things they’d never want to experience in their real lives,” he says. “The play also fascinates me as a teacher who’s teaching students between the ages of 19 and 22. There are a lot of roles in this play—which has a cast of 16—that fall in that age range, so I don’t have to deal with the question of, how do I turn myself into a 70-year-old? All of the young people in this play are trying to find ways to make their lives meaningful.”

The cast’s initial response was: this is one wild ride. But “the more we talked about it, the more I oriented them to the world of the play,” Cohen says, “the more they began to see that though the plot is wacky, the world is very much like our world now.”

The play was certainly considered blasphemous in its time, he says, but little is known about its historical reception. It was rediscovered early in the 20th century and “experienced a bit of a vogue in the ’60s, first in London, and to a lesser degree in the United States.”

The piece poses a physical acting challenge for any cast. “It’s shot out of a cannon, and it keeps on going,” the director says. “The plot hurtles forward and it’s a real challenge to people’s stamina.” The CFA production includes a lot of stage fighting, which was choreographed by Angie Jepson, a CFA School of Theatre lecturer.

Bo Krucik (CFA’17) and Madeline Sosnowski (CFA’17) play Giovanni and Annabella, the incestuous lovers, and Alessandro Zanet (CFA’17) is Soranzo, the most desirable of Annabella’s several suitors, who marries her after she becomes pregnant with her brother’s child. The play’s production, costume, scenic, and lighting designers are all CFA students.

’Tis Pity She’s a Whore was written about eight years before England went to war with itself in a series of conflicts between Parliamentarians and Royalists, and the prevailing cultural tensions are palpable in the play. Cohen says it has particular resonance given the current political climate in the United States. America, too, is a country divided, with a population that cannot agree on a set of common values. “It’s a world in which all the institutions that are supposed to create meaning are proven false. What happened in England was a strong man emerged by deeming himself de facto king,” he says. “We’re wrestling with exactly the same problem: we have a strong man who is jockeying for a de facto royalty position, and that’s what happens in the play.” Cohen is referring to the Papist families that seized power in Parma, an independent republic that was always at odds with itself.

“We are where the play is, in a dying social arrangement and a new one that we can’t make happen yet,” he says.

’Tis Pity She’s a Whore begins tomorrow, Saturday, February 18, and runs through Saturday, February 25 (no performances February 20 and 21), at the Calderwood Pavilion Wimberly Theatre at the Boston Center for the Arts, 527 Tremont St., Boston. Performances are at 8 p.m. on Friday and both Saturdays, 7 p.m. on Sunday, and 7:30 p.m. on Wednesday and Thursday. Tickets are $12 for the general public, $10 for BU alumni, WGBH and WBUR members, and Huntington Theatre Company subscribers, $6 for CFA members, and free for anyone with a BU ID at the door on the day of performance, subject to availability. Purchase tickets here.