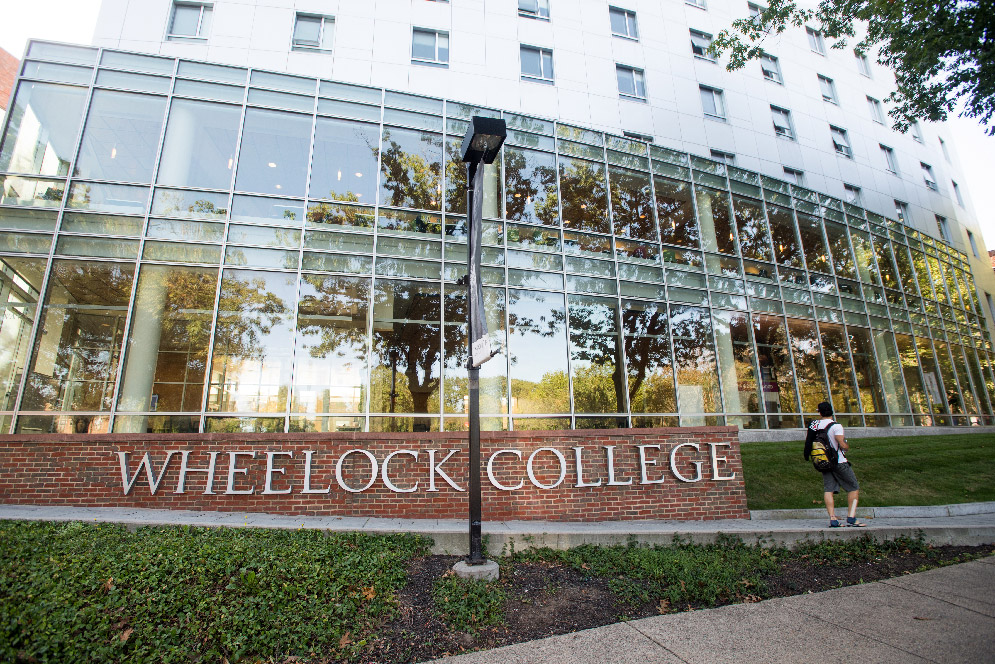 The merger of Boston University and Wheelock College will create a new school of education that will combine the doctoral programs and research capabilities of BU’s School of Education with the early childhood expertise of Wheelock’s School of Education, Child Life and Family Studies, while other Wheelock programs will be joined with appropriate programs at BU. The new college will be called the Wheelock College of Education & Human Development (WCEHD), according to a definitive agreement reached by the parties.

In a letter sent to the BU community this morning, BU President Robert A. Brown says he is pleased that the two schools have reached agreement on the merger. “We believe that BU’s Wheelock College of Education & Human Development will be one of the leading colleges of education in the country, with its focus on clinical practice, scholarship, and community engagement,” Brown says. “The commitment to establish and support this new college will, I believe, appropriately preserve and enhance the great legacy of Wheelock College.”

Wheelock and BU will immediately form a Transition Committee charged with advising Jean Morrison, BU provost, on the academic programs that will be offered by the new college. The committee will be chaired by David Chard, Wheelock president, and vice-chaired by Catherine O’Connor, interim dean of BU’s School of Education, and will include four faculty members from Wheelock and four from the BU School of Education. In addition to this committee, Wheelock and BU will put in place a transition implementation structure to ensure that the integration of Wheelock and BU proceeds smoothly and includes input from stakeholders at both institutions.

The merger, which is scheduled to take place on June 1, 2018, gives BU ownership of all assets and liabilities of Wheelock College, and combines Wheelock’s School of Education, Child Life and Family Studies with BU’s School of Education, establishing a single school, BU’s Wheelock College of Education & Human Development (WCEHD), which will be a centrally budgeted academic unit of Boston University, managed by University leadership and governed by BU’s Board of Trustees. The plan calls for Chard to serve as interim dean of WCEHD from the time of the merger to July 1, 2020, and to report to Morrison. The parties have agreed that immediately following the merger, the Wheelock campus will be used for Boston University academic programs.

“There is a great deal of work to be done,” says Brown. “That work will include some difficult decisions about the scope and organization of the combined college and the integration of other programs of Wheelock College into Boston University; however, we are confident that the results will be worth the effort. Our goal is to treat the Wheelock College students who join us in the fall of 2018 and all Wheelock College alumni as part of the Boston University family.”

Boston University will honor the tuition rates and financial aid packages of current Wheelock students. They will not have to pay BU rates, although their tuition may increase with inflation.

All applicants seeking admission to WCEHD after the merger has been completed will be evaluated in accordance with Boston University admissions requirements, and BU’s tuition, financial aid strategies, and scholarship funds will apply to those students. WCEHD students will be part of BU’s student body, will complete the same general education program, and will have access to the same educational and cocurricular opportunities as other BU students. Requirements for graduate students, including academic and admissions standards and financial aid strategies, will be developed by BU’s Office of the Provost. Alumni of Wheelock College will be treated as alumni of WCEHD and Boston University.

Morrison says BU and Wheelock have agreed on a process for determining the titles and responsibilities that will be assumed by currently tenured Wheelock faculty at BU. She says decisions about nontenured faculty will be made on a case-by-case basis and will depend on the needs of relevant academic units at BU.

BU and Wheelock have agreed that administrative and operational functions of Wheelock will be merged with corresponding units at BU, and the University will offer Wheelock staff appropriate positions where it is practical to do so.

The endowment of Wheelock College will be integrated into that of Boston University and will be managed by the University’s investment office. Income from Wheelock’s endowment will be dedicated to support the Wheelock College of Education and Human Development. All donor restrictions will be honored, and unrestricted funds will also go to support of WCEHD.

Administrators from both schools see the pending merger as beneficial to the two institutions with deep and long-standing commitments to public education in the city of Boston.

“The combination of the programs of the two schools and the additional resources we plan to deploy gives Boston University the opportunity to commit with renewed energy to our long-standing efforts to promote quality early childhood and K-12 education,” says Brown. “That is the foundation for the prosperity and stability of our city and the nation.”

“It’s a very good match,” says Chard, who taught at BU’s School of Education from 1995 to 1997 and was dean of the Annette Caldwell Simmons School of Education and Human Development at Southern Methodist University from 2007 to 2016. “In addition to the proximity of our campuses, the schools were similar and complementary. Boston University and Wheelock both have a historical focus on the city, and they both have a desire to double down on efforts to support the institutions that are most important to the city: its public schools and social services.”

Chard says the merger will create an institution with the resources to bring much needed innovation to public education. “Wheelock really hasn’t had the resources to focus on innovation,” he says. “And this is a time when more of the same in education is not going to get us where we need to be. Education needs new and effective ideas, and this merger will give us an opportunity to be more innovative.”

The Wheelock president says he also sees an opportunity for BU to reenergize some legacies of its School of Education, such as its historical focus on special education, while enhancing its focus on college access.

Morrison has high praise for Wheelock’s Field Education program, which places students in schools, hospitals, and nonprofit agencies, guaranteeing that all graduates have hands-on real-world experience, and also for its partnerships that send students into classrooms in Brookline and Boston and provide support for the school districts’ commitments to improve literacy in multilingual urban schools.

“Programs like those are consistent with BU’s goals and perspectives,” she says. “Bringing our schools together gives us an opportunity to create a strong, nationally recognized school of education with a local footprint with Boston Public Schools. That’s important to us.”

For Wheelock, the merger stands to invigorate a venerable Boston institution whose future was imperiled by the same recent economic developments that plague many small private colleges. Moody’s Investor Services has reported that almost one third of all colleges with fewer than 3,000 students lost money in 2016, up from 20 percent three years earlier.

Founded in 1888 with the goal of educating the children of immigrants, Wheelock’s current three schools—the School of Education, Child Life and Family Studies, the School of Arts and Sciences, and the School of Social Work, Leadership, and Youth Advocacy—had a total of 1,157 students in 2016, a drop of 39 percent from a decade earlier. Financial statements show losses in 2015 and 2016 and project a fiscal year 2018 loss of $6 million on an operating budget of about $30 million.

“The challenge,” says Chard, “is that small schools like Wheelock have to be all that larger schools are. We have to have all of the same components, but in the past five years the costs of those components have gone up significantly relative to our net tuition.” Merging with a larger school, he says, provides critical cost savings on increasingly expensive central services.

In May, the college decided to put its president’s house and one of its residence halls on the market. At the same time, it solicited proposals for mergers from 60 institutions of higher learning across the country. Of the six who responded, Chard says, BU was the best fit, not only for Wheelock, but for education in the city of Boston.