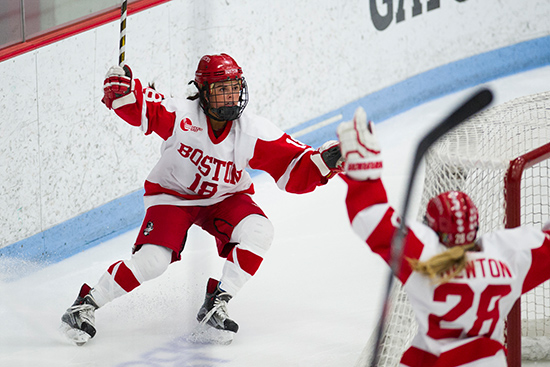 Rebecca Russo (CAS’16) puts in the first BU goal in the first period of the 2016 Beanpot semifinal game between the Terriers and the Northeastern Huskies at Walter Brown Arena Tuesday night. Photo by Jackie Ricciardi

The women’s ice hockey Terriers entered Tuesday night’s Beanpot semifinal with the hope of capturing their first tournament championship in 35 years. In the end, however, the number-6-ranked Huskies proved too formidable a foe, defeating the number-12 Terriers 3-2 in round one of the 38th Women’s Beanpot Tournament at Walter Brown Arena.

BU was down 2-1 heading into the decisive third period. After forward Victoria Bach (CGS’16) came up empty on a flurry of shots, Northeastern senior forward Kendall Coyne recorded her second goal of the night, sealing the Terriers’ fate.

The first half of the first stanza was something of a stalemate between the crosstown rivals, with neither team able to capitalize on its power play chances. BU had four minutes of power play action off two penalties while Northeastern failed on its lone power play opportunity of the period.

Offense picked up for both teams as the period advanced, and BU forward Rebecca Russo (CAS’16) broke the scoring silence with a dazzling wrister goal on the right side of the ice off a timely feed from Rebecca Leslie (Questrom’18) at the 9:17 mark. The Terriers controlled the pace and possession of the puck in the first period, outshooting the Huskies 25-17.

If the first period belonged to the Terriers, the Huskies indisputably owned the second, raising the intensity of their game as soon as the puck dropped. Northeastern fired shots from all angles at Terrier goalie Erin O’Neil (SHA’18), and with just over three minutes played, Northeastern’s Coyne launched a slap shot from the top right that found the back of the net, tying the game 1-1.

Northeastern continued a relentless attack on the net throughout the period, putting 19 shots on target to 5 shots on target from BU. With 5:08 to go in the period, sophomore defender Lauren Kelly broke the 1-1 tie on a deflected shot from the left wing, putting the Huskies up 2-1 heading into the final frame.

Northeastern added to its lead at the 5:45 mark in the third when Coyne managed to get the puck in the back of the net after a skirmish in front of the goal, giving the Huskies a 3-1 lead.

But the Terriers refused to give up. A combination of penalties and a goalie pull gave them a six-on-three advantage in the game’s final minutes. Defender Alexis Crossley (CAS’17) scored with just 1:56 to go, but the Terriers were unable to record the equalizer in the final minutes.

The Terriers knew going into Tuesday night’s game that they were facing a redoubtable competitor: Northeastern’s win followed 12 straight victories, the longest winning streak in the program’s history. And if the night belonged to just one player, it was arguably Northeastern goalie Brittany Bugalski. The Terriers were stopped time and again by the freshman goaltender, who recorded a game-high 30 saves, including 13 in the final period, to seal the victory for the Huskies.

BU will play number 10 Harvard in the Beanpot consolation match next Tuesday at 4:30 p.m. The Terriers have yet to face the Crimson this season and were 0-1-1 in two meetings last year. Northeastern will then play Boston College in the championship game at 7:30 p.m. Again, both games will be played at Walter Brown Arena. The number one Eagles beat Harvard 8-0 in their first round game Tuesday night, achieving a perfect 28-0 record.

The 38th Annual Women’s Beanpot: The BU women’s ice hockey team will play Harvard in the consolation game next Tuesday, February 9, at 4:30 p.m., followed by the title game between Boston College and Northeastern at 7:30 p.m., both at Walter Brown Arena, 285 Babcock St., Boston. Purchase tickets here or call 617-353-GOBU and choose option 2 or at either the Agganis Arena or Walter Brown Arena box office on game days. Ticket prices are $10 for the general public and $5 for youths. Students, faculty, and staff from the participating schools get one free ticket per valid school ID, available only in person. Both games will be broadcast free on Terrier TV.