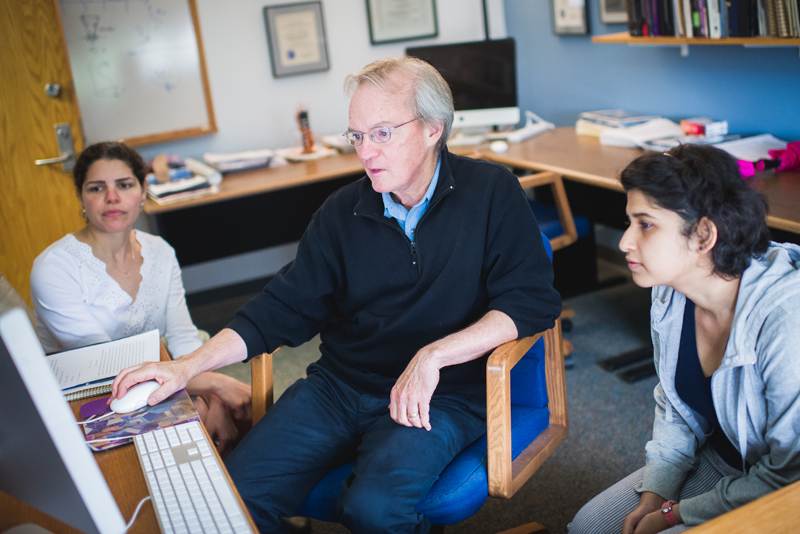 John Clarke has long been fascinated with the atmosphere of Mars and, more specifically, with the apparent disappearance of water from the Red Planet.

A Boston University College of Arts & Sciences (CAS) professor of astronomy and director of BU’s Center for Space Physics, Clarke was part of the team that proposed NASA’s Mars Atmosphere and Volatile EvolutioN (MAVEN) space mission—the first satellite dedicated to studying Mars’ upper atmosphere—back in 2006. Now a mission coinvestigator, Clarke and fellow space scientists attending the October 2016 joint meeting of the Division for Planetary Sciences of the American Astronomical Society and the European Planetary Science Congress in Pasadena, California, have been discussing what the mission has gleaned from its first Martian year (687 Earth days) in space.

“We have strong evidence from all the erosion patterns on its surface that Mars started out with a lot of water,” says Clarke, who was recently elected a fellow of the American Geophysical Union, “but there is no liquid water on the surface today. The atmosphere is too thin and it’s too cold.”

Clarke says there are two ways that water could have vanished: either it froze into the soil, like a permafrost on Earth, or the water molecules split into hydrogen and oxygen atoms. The hydrogen then escaped the weaker gravity of Mars, boiling off into space from the top of the atmosphere.

“We’re trying to understand how that escape from the atmosphere works today, so we can work backwards in time and understand what Mars may have been like when it was young,” he says. The answer could offer clues to the future of climate change on Earth and the possibilities of life on other planets.

The CAS astronomer led a BU team that conceived and designed part of MAVEN’s Imaging Ultraviolet Spectrograph. An instrument built by scientists at the University of Colorado Boulder, it includes what’s called an echelle channel, which was designed by Clarke and developed by BU grad students in the CAS basement. It allows scientists to “separate out emission spectra of hydrogen and oxygen and study them in greater detail,” he says. The original BU instrument was a prototype for the one aboard MAVEN.

The big news that came out of Pasadena during the conference was the MAVEN discovery that the hydrogen escape rate peaked when Mars was closest to the sun, at 10 times the rate of when it was farthest away. So instead of a slow, steady leak, as was once assumed, there now seems to be more of a hydrogen escape cycle.

Mars’ elliptical orbit varies the intensity of the sunlight reaching the planet by 40 percent during a Martian year. “When Mars is closest to the sun, the atmosphere becomes turbulent, resulting in global dust storms and other activity,” Clarke says. “This could allow the water in the lower atmosphere to rise to very high altitudes, providing an intermittent source of hydrogen that can then escape.”

The BU project monitors hydrogen’s escape by tracking the ratio of atoms of hydrogen to atoms of the hydrogen isotpe deuterium, as seen via the very high spectral resolution of the echelle channel.

Deuterium has a proton and a neutron, whereas a hydrogen atom has only a proton. So regular hydrogen atoms will escape the atmosphere faster than deuterium atoms, because they are lighter—a theory consistent with the results.

Clarke and a team of BU faculty and researchers will be analyzing data from MAVEN at least through 2018 with the hope of better understanding what happened to the water that once existed on Mars.

Prior to MAVEN, Clarke spent 30 years studying auroras on Jupiter with the aid of the Hubble Space Telescope. He continues as a coinvestigator on that project.

“We want to understand how planets with magnetic fields interact with their host star,” he says. “We really are interested in the Earth, but then we have the case of Jupiter, where the planet is 10 times larger and has a much stronger magnetic field. It has a very different kind of interaction with the solar wind as it goes by. So it’s interesting in understanding the general principles and understanding the Earth.”

“John has provided critical leadership at a time when we’re rebuilding our faculty and planning for the long-term future of the department of astronomy,” says Tereasa Brainerd, a CAS associate professor of astronomy and the department chair. “He is also a very popular instructor with our undergraduate majors.

“Graduating seniors who take his Observational Astronomy course always say that their spring break class trip to Goddard Space Flight Center, led by John, is one of the most memorable experiences from their time at BU.”

Where Did Mars’ Water Go?