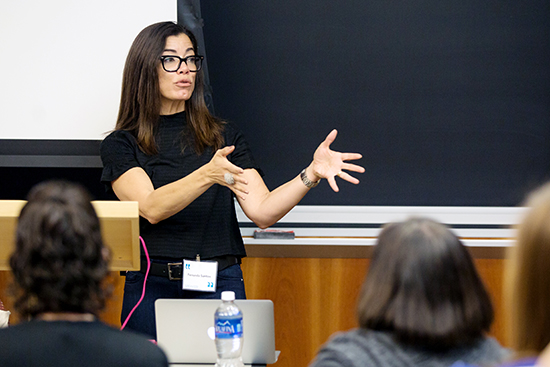 After Fernanda Santos (COM’99) finished her first book, she got a tattoo on her arm: “Be better.” Photo by Alexandra Wimley (COM’17)

“A lot of people like to say that writing a book is like giving birth,” New York Times Phoenix bureau chief Fernanda Santos noted during a breakout session at this past weekend’s College of Communication Power of Narrative conference. The first-time book author continued, “I’ve done both—it’s a lot easier to give birth.”

In 2013, Santos (COM’99) led the Times coverage of the death of 19 elite firefighters from Prescott, Ariz., who were killed in one day battling wildfires that had spread through the Southwest. Their deaths marked the single greatest loss of firefighters nationwide since 9/11, and the largest death toll of professional wildland firefighters in more than a century. Santos’ thorough, and eloquent, reporting caught the attention of literary agents, who wanted to know if she was interested in writing a longer narrative.

She was. She took an eight-month leave from the Times to write The Fire Line: The Story of the Granite Mountain Hotshots and One of the Deadliest Days in American Firefighting, forthcoming next month from Flatiron Books.

“The first question you have to ask yourself before you write a book is: do you love this story?” said Santos, who began her journalism career in her home country of Brazil before coming to BU for grad school. “Are you ready to agonize over it for years? Because you are going to be giving years of your life to it.”

Santos’ talk was among four dozen at the 18th annual narrative conference, which this year explored ways journalists can stay savvy, skilled, and solvent in a wired era. Over three days, nearly 600 journalists packed the College of General Studies auditoriums and classrooms to listen to keynotes and attend workshops by speakers like eminent author Gay Talese (whose controversial remarks about female journalists set off a Twitter storm), science and humor writer Mary Roach, whose best-selling books include Stiff: The Curious Lives of Human Cadavers, and the Moth’s longtime artistic director Catherine Burns (COM’91) and producing director Sarah Austin Jenness (COM’00).

Santos, who worked at the Eagle Tribune and People magazine before landing at the Times in 2005, led a Saturday morning session titled What a Story…But Is It a Book? She began by talking about the kind of work that goes into writing a book. Since she never had a chance to meet the firefighters, known as the Granite Mountain Hotshots, before they were killed, Santos told the audience, she had to rely heavily on interviews with their families and friends to flesh out her characters. She also interviewed scientists and climate experts to learn more about wildfires, which are becoming more prevalent because of climate change and increased urban development. In addition, she spent part of 2014 training at the Arizona Wildlife and Incident Management Academy to learn how to fight fires.

One of the things she enjoyed most about the process of writing the book was doing the necessary research. She recalled moments when she thought she had enough to write a chapter, but would come across another article or meet another expert who pointed her to another source. “Generally, I overreport my stories, and then I get buried by stuff and have to finish my story two hours before deadline,” she said about her newspaper work, to sympathetic laughter from the audience.

To prevent getting overwhelmed by an onslaught of information, Santos stressed the importance of organizing information and making an outline. She collected more than 1,000 pages of documents and 17 memo books of notes while doing research for The Fire Line, and organization was crucial, she said. She said she benefits from building a tree of questions, with each question branching off to another one, many of them prefaced by the word why. By way of example, she rattled off some of her original questions about the Granite Mountain Hotshots—who were they, why did they fight wildfires, how do wildfires burn?

At the end of her talk, Santos invited questions from the audience. One person asked if writing a book had changed her at all. “Profoundly,” she responded. “I’m just one of those people for whom the glass is always half full, and even though this was a very sad story, there were so many things that I learned from the crew. When you read the book, you’ll see they truly believed in one another, in teamwork, and in second chances…

“It changed me as a person.”