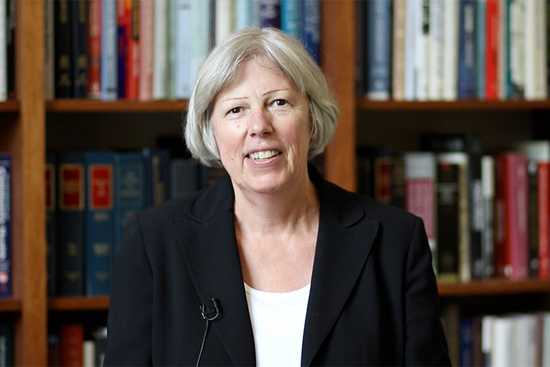 Patricia Hibberd, the new chair of the School of Public Health’s Department of Global Health, says that the public health community must pursue a dual agenda, focusing on both communicable diseases and noncommunicable, chronic diseases. Photo by Michael Saunders

When Patricia Hibberd looks at her smartphone, she sees a chance to save young lives.

Hibberd, the new chair of the School of Public Health’s Department of Global Health, has been working in Malawi, India, and Pakistan to develop a low-cost thermal imaging system for smartphones that would help to detect bacterial pneumonia in children in countries where standard chest X-rays are not available. The prospect of giving resource-strapped clinicians a way to diagnose the world’s leading cause of death of children under age 5 marks a new chapter in her 25-year quest to stem childhood pneumonia, sepsis, diarrhea, and other illnesses.

“X-ray machines are not going to magically appear in the health clinics of poor countries. We can’t wait for that,” Hibberd says. “Smartphones are everywhere. This is about giving clinicians the tools they need to save lives, now.”

A physician and epidemiologist, Hibberd came to SPH this summer from Harvard University, where she has been a professor of global health at the Harvard T.H. Chan School of Public Health and professor of pediatrics at Harvard Medical School. She also has headed the Division of Global Health in the Department of Pediatrics at Massachusetts General Hospital (MGH).

A native of Liverpool, England, who earned her PhD from the University of Leicester and her MD from Harvard in 1986—six years after coming to the US—Hibberd has spent much of her research career tackling the alarming rates of morbidity and mortality among women and children in the developing world. Over the last 15 years, she has collaborated with researcher Archana Patel in India on ways to reduce the rates of neonatal sepsis and pneumonia, as a leader of the National Institutes of Health’s Global Network for Women’s and Children’s Health Research at MGH. The group’s most important contributions have included the early recognition of severe hypoxemia and treatment with oxygen for children with pneumonia in resource-constrained settings, and the development of point-of-care diagnostics for neonatal sepsis.

Hibberd also is a Paul G. Rogers Society Ambassador for Global Health Research and chair of the Data and Safety Monitoring Board for the Centers for Disease Control and Prevention’s STRIVE Trial, which is testing a vaccine to prevent Ebola in Sierra Leone.

The author of more than 250 scientific articles, many on pediatric health, Hibberd says she plans to continue her own research work at BU, while supporting the many projects underway in the global health department. She cites as one of her reasons for coming to BU SPH Dean Sandro Galea’s commitment to “leverage new technologies, such as bioinformatics, to drive a new agenda for public health.”

She recently spoke with BU Today about her research interests and what excites her about the new position.

BU Today: You’ve had a long career focused on preventing and treating childhood diseases. How did you become interested in that area of research?

Hibberd: As an infectious diseases physician and epidemiologist, my main interest has always been to make a real difference in childhood mortality. To do that, I have to follow the reasons why children unacceptably keep dying. Today, in 2016, babies die in the first month of life, mostly because of infections, or sepsis, and between two and 59 months, because of pneumonia. This was true in the 1990s—and unfortunately, it’s still true now. To me, that is just not OK.

There are vaccines that prevent pneumonia in children, as long as they survive to age two months. These vaccines are available for all babies in the US, Europe, and Australia, but they’re not widely available in resource-limited settings.

I keep asking the doctors in these places, “Don’t people donate vaccines for the babies here?” Sometimes, the answer is yes. They’ll say, “I got a gift of 100 vaccines—so what I am supposed to do? Save the lives of 33 babies, as each baby needs three doses of the conjugate pneumococcal vaccine and three doses of the Haemophilus influenzae [type] b vaccine? Or should I try and save 50 babies who get two doses of each vaccine, even though that is not recommended?” That’s a terrible decision for a clinician to have to make. In the developed world, these are not decisions that any doctor faces.

You’ve focused on the diagnosis side, more than the vaccine side. Why?

While we figure out how to make sure vaccines are available for all babies, we still need to find and treat babies who are sick and can be treated for the infections that vaccines should prevent.

What everyone forgets is that pneumonia and sepsis in babies are among the most difficult diagnoses to make—even here in Boston, never mind in remote rural villages in sub-Saharan Africa and Asia. The way I think about this is that we need to improve diagnosis of serious infection in babies everywhere, in Boston and beyond. And, at the same time, we need to get lifesaving vaccines to that beyond.

I’m delighted that I will be moving our NIH-funded Global Network grant to BU and continuing the work on early detection and treatment of pneumonia and sepsis. We’re going to continue looking for the best ways to recognize infants at risk as early as possible—in the home—so that they are brought for treatment as quickly as possible.

How promising is the thermal imaging technology you’ve been piloting?

We have some very impressive results here at home, and some exciting preliminary data from India and Malawi. Basically, the technology allows us to diagnose children who have pneumonia caused by bacteria by identifying asymmetric hot spots of high temperatures in the lungs, caused by localized inflammation.

We are studying how to use this technology in urgent-care outpatient clinics and emergency departments in our own backyard, while also conducting rigorous studies to determine whether thermal imaging can be used by first-level health care workers in developing countries to diagnose and start treatment with antibiotics as early, and as appropriately, as possible. This is work we will continue with collaborators across BU, including Muhammad Zaman, a College of Engineering professor of biomedical engineering on the Charles River Campus.

What excites you most about being at SPH?

There is a palpable excitement about public health, in Boston and in the broader community, since Dean Galea arrived. This is a time when the public health agenda is coming to a kind of crossroads: concern over communicable diseases is being overshadowed by attention to noncommunicable, chronic diseases. But we are not done with communicable diseases, by any means. Zika and Ebola remind us of that. So we have to do more, and get more right fast.

Dean Galea and the SPH faculty are focused on pushing the public health community to pursue this dual agenda in innovative ways. I so want to be part of that.

There is 1 comment on SPH Welcomes New Global Health Chair