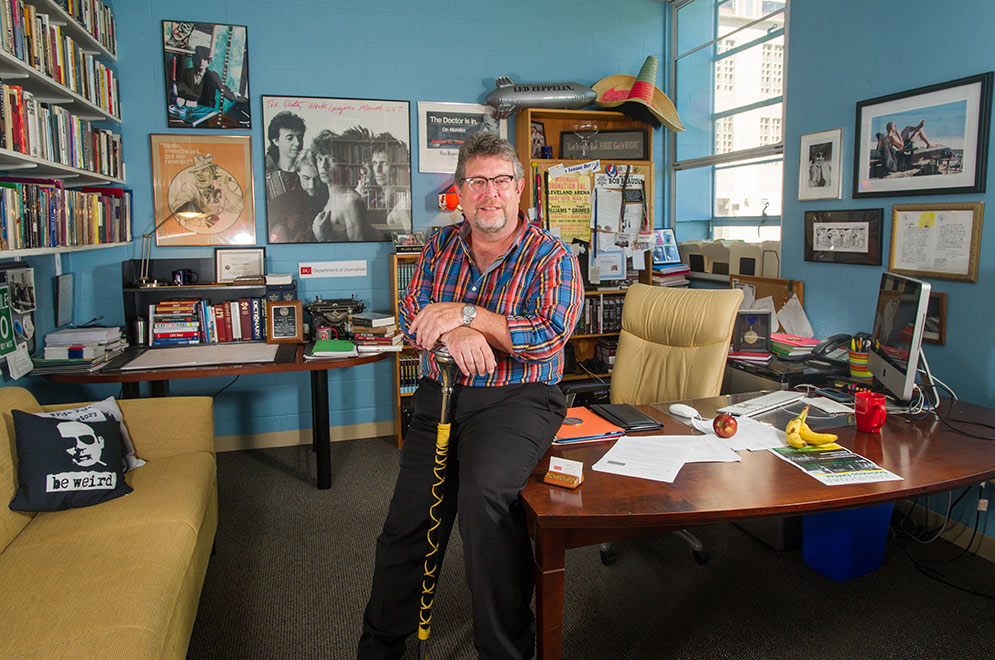 Click on the circles for more about what William McKeen displays in his College of Communication office.

Shortly after William McKeen published his first biography of the famous gonzo journalist Hunter S. Thompson, Hunter S. Thompson: A Critical Biography, he received a 17-page fax from his subject, who called him a “shit-eating freak” and warned him that “a bushy-haired stranger in a dimly-lit parking lot” might blind him.

“I could recognize his handwriting as the letter was coming through, and I thought, well, he’s got the book, let’s see what his response is,” says McKeen, a College of Communication professor of journalism and associate dean. “His assistant called me right away and she said, ‘You know that means he liked it, right?’ If he hadn’t liked it, he probably wouldn’t have written anything. He was one of those people who showed affection through abuse.”

McKeen has only one page of the obscenity-laced letter framed in his office, although the full version is printed in his 2008 book Outlaw Journalist: A Biography.

He remembers receiving a call from Thompson shortly before he killed himself with a handgun in 2005. In true Thompson fashion, he left no phone number, and McKeen was unable to return the call.

“When he died, I thought it would be good to have his full life story,” says McKeen, who went on to write the second book on “the doctor.” “Other people wrote books about him, and they were always about the caricature, the craziness, the drinking, the drugs, and no one really explained why we should care about him. I wanted to write his life story, which had its moments of outrageousness, but I wanted people to recognize that he was a pretty good analyst of life and a really wonderful writer.”

McKeen feels he did a better, more thorough job on Outlaw Journalist, although it was based on the earlier, shorter book. “I wish my first book had been better, because one of his friends told me that he kept it on a shelf above where he cooked,” he says. “Every so often, his friend and assistant told me, he would ask people to read from it and sit there and smoke. He would say, ‘That guy understands me.’”

There are 6 comments on Office Artifacts: William McKeen