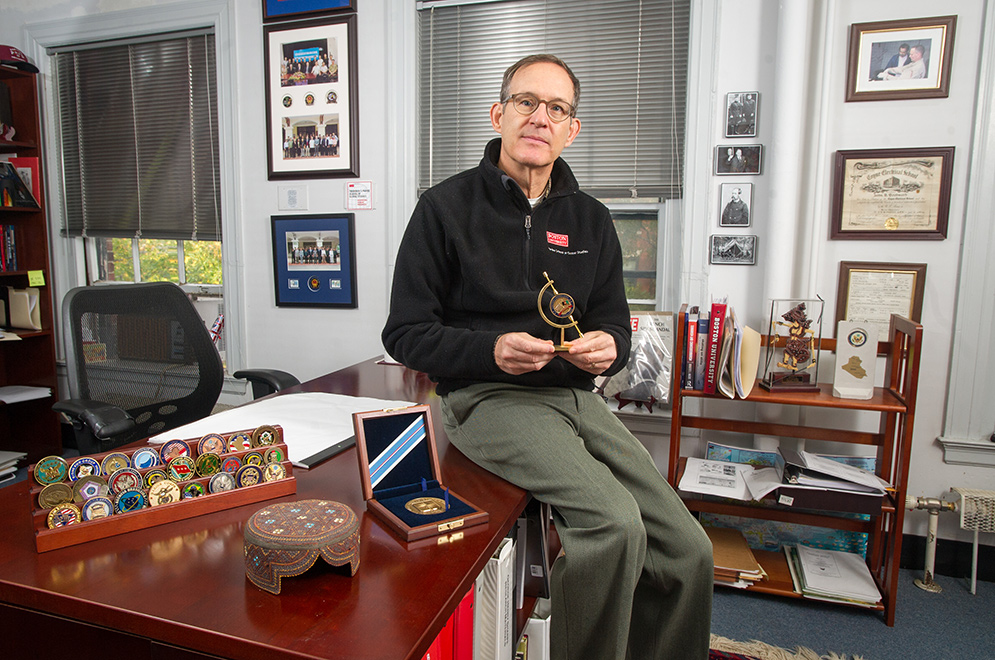 Click on the circles above to see more of what John Woodward displays in his Bay State Road office.

John Woodward has a habit of using the sentence, “I can neither confirm nor deny I served in that country.”

Woodward, a Pardee School of Global Studies and College of Arts & Sciences professor of the practice of international relations, is a 21-year veteran of the Central Intelligence Agency, and on display in his Bay State Road office are many artifacts and memorabilia from his treks abroad. During his intelligence career, Woodward estimates he traveled to 30 countries, serving as an operations officer in the National Clandestine Service, as a technical intelligence officer in the Directorate of Science and Technology, and as director of the US Department of Defense Biometrics Management Office. He has testified before Congress four times, and in October 2015 received the CIA’s Career Intelligence Medal, awarded to those who have significantly contributed to the agency. Woodward’s area of expertise is biometrics.

Hollywood’s depiction of CIA agents isn’t entirely accurate, Woodward says—for instance, “We’re not all knuckle draggers and torturers. Most intelligence work is tedium and requires having great attention to detail over seemingly trivial matters. There are a lot of hours spent on preparation and minutes spent on actual execution.”

He tries to drive these points home in the classes he teaches on Intelligence in a Democratic Society and Intelligence and Homeland Security. He says that most of his students take the courses because they are interested in espionage, but his job is to “make them realize there is a tension between intelligence activities in democracies. Democracies have to balance the kinds of things that intelligence agencies do—working in secret—with making sure there is proper oversight of intelligence activities. Most students would rather hear spy stories, but I think it is important to stress that there is a tension and it’s very important from a policy perspective to think about this.”

Although awards and foreign souvenirs catch visitors’ eyes, the item in his office that means the most to him isn’t related to his CIA career. His late father, who died when he was 10, was a World War II combat veteran. After retiring from the CIA, Woodward searched his mother’s attic for furniture for his new Boston apartment. “I started going through an old cardboard box and found my father’s World War II discharge papers, and you can see it confirms his overseas service, where he got four bronze stars,” he says. “I had never seen this document before.

“It was something that I thought I would never have, and it was because I was moving to BU, that I got those things,” he says.