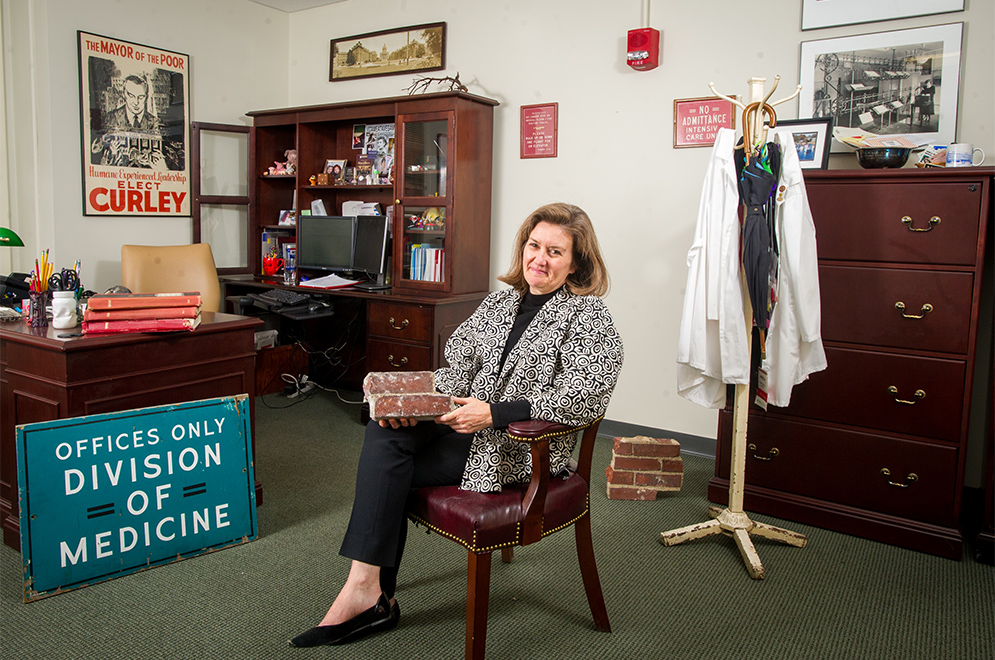 Click on the circles to see more of what Angela Jackson displays in her School of Medicine office.

As the old Boston City Hospital, built in 1864, was being torn down more than two decades ago to make way for the new Boston Medical Center, Angela Jackson went on a salvage mission.

“I was part of the crew that came in at 4 a.m. with the National Guard to make sure that patients were getting safely moved into the new building,” says Jackson, who served for a year as chief resident at Boston City Hospital and is now a School of Medicine associate professor of medicine and associate dean for student affairs. “When the hospital was finally empty, I went around with my boss and we just collected stuff. We got an old stretcher.”

Several of those artifacts now reside in Jackson’s office in the Medical School A building. Besides a teaching career focused on health policy, primary care education, and skill development for clinical teachers, she also has an active primary care practice at Boston Medical Center.

One of her favorite among this memorabilia is a collection of record books known as “the book.” Every night, she says, the senior resident would take the book to each floor, talk to the staff, and record the condition of every patient in a handwritten log.

“We would write comments down by hand, like, ‘It was a crazy night, Mr. Flowers [not his real name] came back from the emergency room,’” says Jackson. “There are years and years of the book, including my time as intern and as chief resident, as well as periods before me. These were all going to get thrown away. Every now and then an old City Hospital resident will come by to visit, and we’ll pull out the book and they’ll find their year. It’s just nostalgic and fun, and it is a really important part of medical history.”

Jackson says the hospital offered to donate photos and mementos of the old hospital, which was one of the country’s first municipal hospitals, to the Boston Public Library, and when that didn’t work out, she decided to display some of the most intriguing of them in her office.

“It was so important to me to save all of these things because I trained at Boston City Hospital, and City Hospital was a really, really special place,” says Jackson, who has become an unofficial historian of the old hospital. “It’s the history of where I learned and such an important part of generations of other doctors who trained and worked before me.”

There are 6 comments on Office Artifacts: Angela Jackson