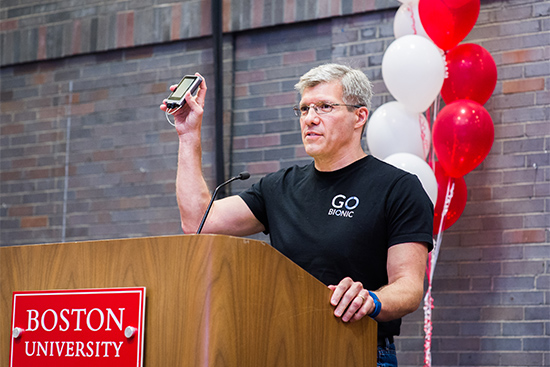 Ed Damiano, a College of Engineering professor of biomedical engineering, holds up the bionic pancreas device for which he was honored as BU’s 2016 Innovator of the Year.

Two million people in the US live with potentially deadly type 1 diabetes, and Ed Damiano wants to make them healthier, safer, and “dramatically unburdened from managing their diabetes.”

Among those people is his son.

Damiano was honored on July 12 as Boston University’s 2016 Innovator of the Year for his efforts developing an artificial, or bionic, pancreas that regulates blood sugar levels by automatically delivering precisely calibrated doses of insulin or glucagon every five minutes.

“People will be healthier on this device from the very first day they put it on,” says Damiano, a College of Engineering professor of biomedical engineering.

The Innovator of the Year award, presented by the Office of Technology Development, recognizes a BU faculty member whose cutting-edge research is being brought to market and benefits society at large.

The wearable device will be the subject of a small National Institutes of Health–funded human clinical trial, called a bridging study, at four US sites this winter, in preparation for the Phase III or pivotal trial, which will generate data for FDA evaluation of the device. That trial will begin enrollment in the first half of 2017 and involve more than 600 patients at 16 clinical centers around the country.

Damiano’s special reason for undertaking the project, his son David, was diagnosed with type 1 diabetes when he was 11 months old. That’s terrifying news for any parent, and Damiano took it as a challenge. While he will just miss his long-term goal—getting the bionic pancreas to market before his now 17-year-old son goes off to college in fall 2017, he is pleased with his progress.

“Ed’s determination and his systematic and persistent work to achieve this goal has been incredibly impressive,” says Gloria Waters, vice president and associate provost for research, who presented the award. “He has worked tirelessly, and his success in raising funds from a wide range of sources, carrying out the science, and developing the technology in a very short period of time has been nothing but remarkable.”

Damiano’s device is called the iLet, a reference to the pancreatic islets of Langerhans, the hormone-producing areas of tissue in a healthy pancreas. It looks like a thick iPhone, with two ports on the end for the tiny drug delivery tubes. A subcutaneous sensor provides the blood sugar data to the device via Bluetooth.

The device’s firmware contains algorithms that automatically adjust drug dosing every five minutes. That’s a great improvement over the current system, which requires the user to do frequent blood testing and calculations, then inject insulin or consume food to correct their levels. And because the device is bi-hormonal, delivering both insulin (to lower blood sugar) and glucagon (to raise it), the ups and downs of a user’s blood sugar levels can be kept in a much narrower and safer range.

The iLet will be studied with insulin only first, and then in the bi-hormonal mode. Assuming everything goes smoothly, the insulin-only device could come to market in 2018 and the bi-hormonal version in 2019.

While Damiano says he’s honored at being named Innovator of the Year, he’s not taking time out to celebrate.

“Being ebullient and enthusiastic about all the accomplishments that have come so far is great, but it’s a distraction,” Damiano says. “The enthusiasm I have for that reality is masked by the immense amount of work to do over the next 24 months.”

That work includes everything from a variety of subsidiary approvals to manufacturing hurdles to financial matters. As the device is approved, Damiano also has to persuade health care payers to approve it for patients. “I have great confidence that they will reimburse it, but it’s not a passive process,” he says. “I have to get in front of all these payers and show them how far superior this technology is to the standard of care. I think at that point the data will convey the message all by itself.”

The Innovator award also recognizes entrepreneurial efforts, in this case Damiano’s creation of a new medical technology company called Beta Bionics with several partners, including his longtime collaborator Firas El-Khatib, a BU senior research scientist. In 2014–15, before starting Beta Bionics, Damiano raised about $2.5 million in donations to his lab at BU from the diabetes community. At the end of 2015, Eli Lilly and Company invested $5 million in Beta Bionics, which is also building equity by crowdfunding, at $100 a share, via a Wefunder page, with about $900,000 raised from 650 investors.

“It’s unusual for someone to take something this far from the genesis of the concept. Usually we hand it off,” says Michael Pratt (Questrom’13), interim managing director of the Office of Technology Development, who volunteered as a healthy control subject in one of Damiano’s early studies and remains deeply impressed by his commitment.

“Ed was maniacal about caring for his son, setting his alarm to get up every hour through the night and check his blood glucose. I can’t imagine what that was like,” Pratt says. “Then he sat down with Firas in Bertucci’s in Kenmore Square, and they had this back and forth till they came up with the kernel of the algorithm mimicking how Ed cared for his son. That kernel persists to this day. He means business. He’s seeing this through.”

Beta Bionics is a public benefit corporation, a for-profit corporate model that allows for socially responsible decision making, such as choosing to decline a profitable buyout offer to keep the bionic pancreas on track for fast development and wide distribution.

“The company becomes a vehicle for the movement he’s creating here,” Pratt says, “but not in the traditional sense of going out there and trying make a million dollars. He’s trying to rally people together to treat this disease.”

Innovator of the Year Tackles Type 1 Diabetes
7
share this