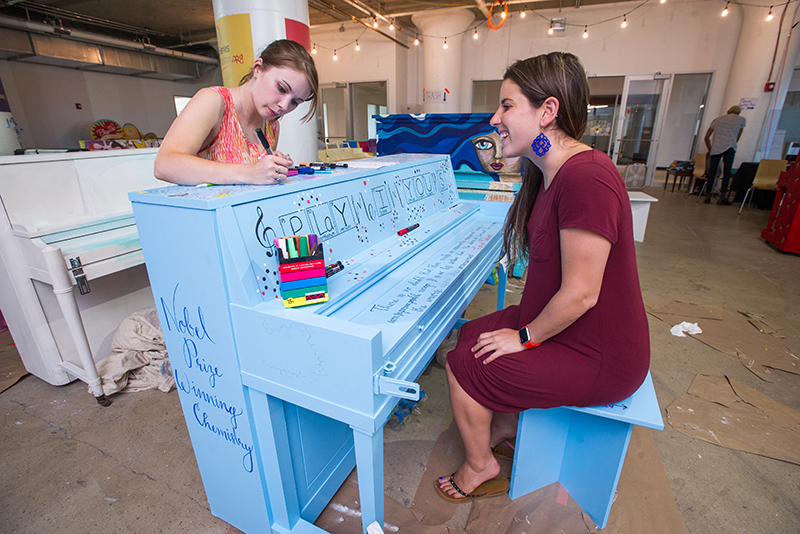 Beeler Research Group graduate students Alexis Courtney-Young (GRS’18), left, and Gabrielle Fleming (GRS’19) paint a piano for the Street Pianos Boston 2016 art installation Play Me, I’m Yours. The students decorated the top of the piano with the chemical structures of molecules submitted by their friends and family, other students, and the public to the group’s website. Photos by Jackie Ricciardi

Pedestrians around Boston or Cambridge in fall 2016 might spot something a little whimsical on their walks. Sixty painted pianos, all decorated by different local artists and groups, have taken up residence on the streets. Some sport flowers and props, some bear delicate, swirling designs, and some have patterns reminiscent of Kandinsky or Picasso. One piano stands out from the others as having a particularly scientific aesthetic. Painted robin’s-egg blue and covered with the chemical structures for dozens of different molecules, the piano makes art out of a subject that is traditionally seen as obtuse and intimidating.

The chemistry-themed piano, created by Boston University’s Beeler Research Group, is part of Street Pianos Boston 2016, produced by Celebrity Series of Boston. The project, which last visited Boston in 2013, is a branch of a worldwide street piano art installation started by British artist Luke Jerram in 2008. Each piano bears the phrase Play Me, I’m Yours, inviting all who pass to make a little music.

Aaron Beeler, head of the research group and assistant professor of chemistry, grew interested in the Street Pianos project in 2013, when he saw one of the instruments outside of his office building. “I could look at it out my window and I was always impressed,” he says. “Someone was always playing it. I guess it left a mark.” When he learned that the installation was returning, Beeler decided to apply and was excited to be selected.

“Science is such a significant part of Boston,” he says, and the street piano project seemed like a good way to represent this.

The original artist designed the Play Me, I’m Yours installation not only to give everyone access to a piano, but also to allow people to interact with their environment, meet others, and share their community. The Beeler Group’s street piano goes a step further and aims to make chemistry appealing to everyone, regardless of scientific background.

“Talking about my work with non-chemists is challenging, but having a visual piece where people can see that there are molecules everywhere makes it accessible,” says Gabrielle Fleming (GRS’19), a third-year graduate student at the Beeler lab and one of two students who painted the bulk of the piano. She and fellow artist Alexis Courtney-Young (GRS’18) both stress that connecting chemistry with daily life is one of the goals with their piano.

Courtney-Young painted a small bee on top of the piano to illustrate ethyl phenylacetate, the molecule that gives honey its aroma. “Everything is made up of chemicals,” she says, indicating the other food molecules she painted. “People don’t want to think about that,” adds Fleming. “It has a negative connotation.” But they hope that the project will help turn that attitude around.

The students decorated the top of the piano with the chemical structures of molecules submitted by their friends and family, other students, and the public to the Beeler Research Group website. Many of the molecules might be familiar to science students—for instance, dopamine and glucose—but many more sound familiar outside the lab. Caffeine was a popular submission, as was capsaicin, which makes peppers spicy. Strontium carbonate, used in red fireworks, and eucalyptol, found in eucalyptus leaves, are less well known but also made it onto the piano. The students included each molecule’s name and a short description of its purpose, so the piano teaches as well as delights.

According to Courtney-Young, non-chemists were also very excited to give molecule submissions. “They didn’t know what the molecules were, but they would say ‘I want the molecule found in pumpkins!’” (It’s cis-3-hexenol, which gives pumpkins their characteristic smell.)

The piano went on display at the Museum of Science, Boston, on September 23, 2016, and will remain there until October 10, located outside in the small plaza to the right of the museum lobby, close to the ticket kiosk for the Boston Duck Tours.

Even before noon on a weekday, the piano attracts a lot of attention. Most visitors who see the piano come over to take a look and pick out a few notes. Some plunk their children down on the bench, painted with the periodic table, and film them playing little melodies. Others sit down themselves for passionate, if sometimes self-conscious, renditions of Beethoven’s Für Elise and the ever-popular “Heart and Soul.”

One young man makes a beeline to the piano from the sidewalk. “This is so cool,” he says, sitting down to play. His friends circle the instrument, examining the painted molecules with exclamations of interest.

“We accomplished what we set out to do,” says Beeler.