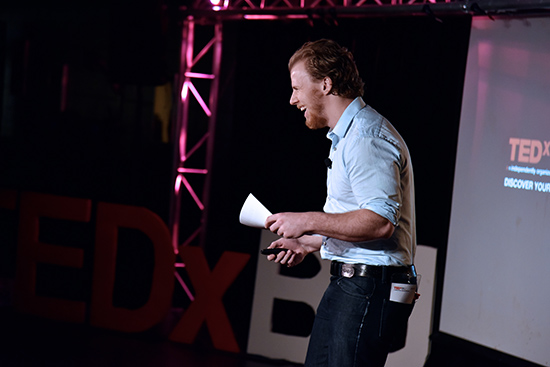 Jim Russell (COM’15) earned laughter with his talk about gender roles and expectations of masculinity as one of the speakers at TEDxBU on Saturday, April 4. Photos by Harris Allen for TEDxBU

One speaker said he never felt a sense of belonging until he discovered hip-hop as a young teenager. Another wondered why we’re asked to “man up” and be tough, but never to “woman down” and be more empathetic. A third explained all the ways that music affects the brain. And another crawled onto the stage and asked the audience to consider when cowardice might have value.

Each was a featured speaker at last Saturday’s daylong TEDxBU event, which drew faculty, students, alums, and others from around the globe to BU Central. The theme was the spark that drives each person to achieve. Areas of focus were community, empowerment, individual identity, and education, but the 11 individuals who took their turn standing on the big red TED dot on stage pushed those topics in their own highly individual directions.

The TED talks are world-famous gatherings begun in 1984, where luminaries from any field give short talks (18 minutes or less). The topics were originally all connected to technology, entertainment, and design (TED), but now cover an almost endless range. TEDx events give local organizers a chance to put on similar events customized for their communities.

TEDxBU organizers Ben Lawson (CAS’17) and Salma Yehia (CAS’15) didn’t even know each other last June when each applied separately to the TED organization to run an event at BU. Yehia is a longtime TED fan who had been dreaming of putting something like this together for years. Lawson had attended TEDxSomerville last March and “was just so inspired by how the local voices there really do embrace their communities that I wanted to bring that type of event to BU,” he said.

Lawson applied a week ahead of Yahia and got the license, but the project quickly turned into a collaboration. “One of the TEDx people finally got me in contact with Ben, and we agreed that we both want this to happen at BU, so let’s work together,” Yehia said.

“Our speakers were talking about their individual sparks and their passions, and how their passions spark every moment of their day,” Lawson said. “The goal was to have audience members discover that, to find what their passion is, if they don’t already have their spark. And we hope through interaction, they’ll be able to discover their spark and share their spark with others.”

More than 300 people applied to attend, but the under the TED rules, the audience was capped at 100. Additional seating was provided in an overflow room, and the event was streamed live on the internet.

The welcoming remarks from Daryl Healea (STH’01, SED’10), Residence Life associate director for student and staff development, connected the TEDxBU event to the University’s roots in Boston Personalism and its most famous alum, Martin Luther King, Jr. (GRS’55, Hon.’59). Chelsea Roberts (COM’14), who uses spoken word to promote pro-black activism and empowerment through the arts, spoke passionately of the difficulties of being a person of color in the “crockpot” of ethnicity at BU, facing frequent questions of, “So what are you?” She told the audience, “I just want to shake them and say, I’m a human being.”

Writer Wouter Boon, author of the recent book Defining Creativity, said, “You are the master of your creative spark. Don’t let your idea be blended into a tasteless soup that everyone might sort of like.” A Dutch-trained lawyer, Boon switched to advertising more than a decade ago and founded an international blog about advertising—Amsterdam Ad Blog.

Speaker Anna Kasdan (CAS’16) is a neuroscience major who is minoring in piano performance. She used a diagram of the brain to illustrate all of the places where listening to music has an effect, and got a big laugh when she said that evolution explains “why girls today are attracted to men with guitars.” Kasdan has worked for the past three years at the Sargent College Aphasia Research Laboratory, where she is engaged in research in music and language. She became serious when she described seeing patients unable to speak, yet so roused by music that they can sing songs—an experience she called mind-blowing.

Christopher Walsh (GRS’95,’00), a College of Arts & Sciences assistant professor of English and acting director of the CAS Writing Program, is the author of the recent Cowardice: A Brief History (Princeton University Press, 2014). He literally crawled onto the stage to make a point: he wanted the audience to empathize with the soldiers pinned down by enemy fire in a picture projected behind him. Walsh told the crowd to think of their creative spark as a duty they must enact despite whatever fears come with it. The possibility of being labeled a coward, he said, “pushes us to ponder what it is we should do and what it is we are afraid of.”

In between speakers there were songs, a poem reading, videos of famous TED speakers, audience-participation comedy, and breakout sessions that included group photos and a painter at work. About 30 volunteers were involved in putting on the event, many of whom knew the TED name, but not each other before they started. Organizers hope that their “big family” of volunteers and attendees will continue on now that the event is over.

All of Saturday’s speakers were either nominated or applied through the website and had to provide a personal video telling “why you want to speak at TEDxBU specifically.” Those who had a generic message were rejected (including a Harvard professor the organizers diplomatically declined to name). Among the 11 speakers chosen were 3 current BU students. Alexander Golob (CFA’16), who has a background in grassroots campaigns and cofounded the nonprofit Wellesley Parents Supporting Art Students to support visual arts in his hometown public schools, talked about student organizing within the higher education system. And Jim Russell (COM’15), a Posse Scholar from Georgia, who is cofounding a record label and film production company, spoke humorously about gender inequalities and definitions of manhood.

“It’s a nice way to take a break from the day-to-day,” said attendee Susmita Gadre (CAS’16). “People get caught up in that and forget why they’re doing what they’re doing. This gives people a chance to think about what really inspires them in the first place.”

“People want to be inspired, and we’re drawn to people who give us that inspiration,” said Lauren Extrom (CAS’16).

The combination of speakers impressed Tyrone Hou (CAS’18). “They all came at the topic from different angles,” he said.

While there have been other one-off TEDx events at the University in the past, Lawson and Yehia hope to set themselves apart by holding such events on a regular basis, and are considering the move to becoming an official student group.

“It was amazing reading through those 300 responses from prospective attendees, because the amount of passion and the spark that every student exhibited through their applications was just amazing and inspiring,” said Yehia. “This is going to be bigger than 100 people eventually.”

The original live stream of the event is available for viewing here.

Bringing a Spark to BU

There is 1 comment on Bringing a Spark to BU