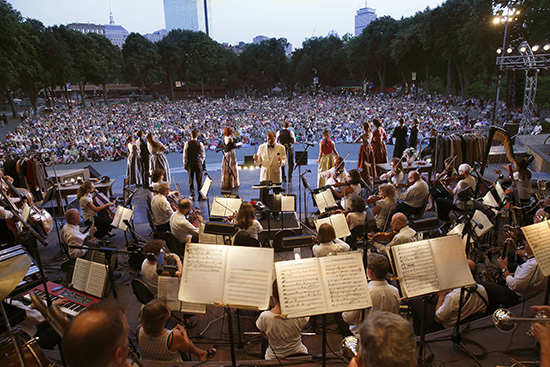 The Boston Landmarks Orchestra will perform a free concert of classical music inspired by water tonight at the Esplanade’s Hatch Shell, beginning at 7 p.m. Photo by Michael Dwyer

Note: Because of the threat of thunderstorms, tonight’s Boston Landmarks Orchestra concert has been moved indoors and will take place at 7 p.m. at Emmanuel Church, 15 Newbury St. Due to limited seating, wristbands will be handed out on a first come, first served basis starting at 6 p.m.

Since its inception in 2001, the Boston Landmarks Orchestra (BLO) has sought to unite the city’s diverse communities through the common language of music, offering a series of free summer concerts at the Hatch Shell on Boston’s Charles River Esplanade. Starting tonight, and held every Wednesday (weather permitting) through August, the orchestra will offer a wide range of symphonic music. Guests are encouraged to bring picnics.

Tonight’s opening season concert, Rhapsody in Green, features music that celebrates—and is inspired by—water. In keeping with tradition, the concert will begin with a performance of Robert Lowry’s beloved 1864 hymn “At the River.” Each year, the BLO performs a new musical arrangement of the hymn, which has become the orchestra’s unofficial anthem. This year’s performance, receiving its world premiere, is arranged by Francine Trester, a Berklee College of Music professor.

Also on the program are the New England premiere of Pulitzer Prize–winning composer Kevin Puts’ River’s Rush; Alan Hovhaness’ And God Created Great Whales, which incorporates whale songs; Felix Mendelssohn’s popular concert overture The Hebrides, inspired by his trip to a cave on the island of Staffa in Scotland’s Hebrides archipelago; and Claude Debussy’s La Mer (The Sea), a haunting series of symphonic sketches.

The summer’s other upcoming BLO Hatch Shell concerts are Fiesta Sinfónica, an evening of Latin symphonic dance music, on July 22; A Night at the Ballet, a concert of famous ballet music performed by the Longwood Symphony Orchestra, on July 29; Italian Night, a program of symphonic Italian opera music, including works by Puccini and Verdi, on August 5; Sheherazade Meets Clarice Assad, headlined by the Brazilian composer, pianist, and vocalist, on August 12; Drums along the Charles, with the New England premiere of Philip Glass’ Concerto Fantasy for Two Timpanists, Rachmaninoff’s Symphonic Dances, and more, on August 19; and the summer’s finale, in collaboration with the Commonwealth Shakespeare Company, a fully staged production of Shakespeare’s A Midsummer Night’s Dream, with a score by Mendelssohn, which includes his famous Wedding March, on August 26.

The Boston Landmarks Orchestra performs tonight, Wednesday, July 15, at 7 p.m. at the Hatch Shell and every Wednesday through August. Admission is free. Take any MBTA Green Line trolley to Park Street, transfer to an outbound Red Line train, and get off at the Charles/MGH stop. Find information about weather cancellations or about the Boston Landmarks Orchestra here.

Free Classical Music Concerts on the Charles
0
share this