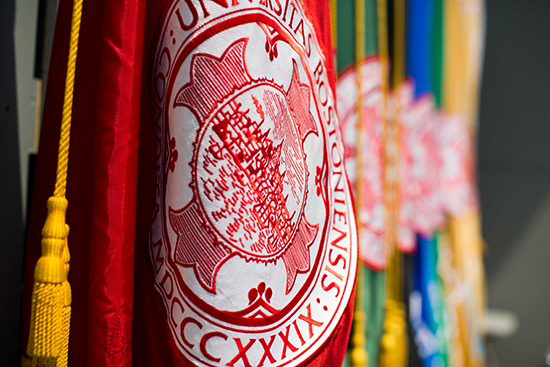 Because the original Campaign for Boston University target of $1 billion is within reach, the Board of Trustees has decided to raise it to $1.5 billion. “The momentum of our campaign is still growing,” says President Robert A. Brown, “and its impact across the University is obvious.” Photo by Kristyn Ulanday

The singular success of the Campaign for Boston University, which has raised $888 million of its $1 billion goal two years before its scheduled close in 2017, has persuaded the Board of Trustees to boost the campaign’s goal to $1.5 billion and extend its run through 2019. Scott Nichols, senior vice president for development and alumni relations, says that unlike most campaigns, which begin with a burst of activity and flatten out before picking up again at the end, the momentum of the BU campaign has increased each year, adding more to the total than the year before.

“When we saw that pattern—that the campaign was refusing to slow down—that’s when it became clear that we’ve got a major success on our hands, and what do you do with that?” Nichols says.

President Robert A. Brown is pleased and grateful for the campaign’s success. “Because of the generosity of our alumni and friends, today we are able to imagine a Boston University that better serves our students and that is playing an ever larger role in shaping the world through our scholarship and research,” he says. “The momentum of our campaign is still growing and its impact across the University is obvious. We are seizing the opportunity to set our sights higher and increase our goal.”

Nichols says the campaign has received 142 gifts of more than $1 million, totaling just over $564 million, but donations of all sizes are adding up. In late winter 2015, he says, the fundraising effort added its 100,000th donor, and during fiscal 2015, it showed an increase of nearly 2,000 alumni donors over the year before. “There’s good news in virtually every category,” Nichols says.

The campaign, which is central to the strategic plan drafted after Brown took office in 2005, officially launched in 2012, after a two-year “quiet period.” Its goals include supporting students to ensure that BU remains accessible to highly qualified candidates, as well as recruiting and retaining outstanding scholars and teachers and improving facilities.

Kenneth Feld (Questrom’70), vice chairman of the Board of Trustees and campaign chair, compares the fundraising effort to “a snowball rolling downhill.”

“It’s involving more people,” he says. “That’s the great thing. It has galvanized people we didn’t even have contact with, people who perhaps had forgotten about BU for a few years. Now they’re reengaged, and they look at what has happened since Bob Brown has been president, what he’s accomplished, and it’s not rhetoric. The results are real.”

Feld, the chairman and CEO of Feld Entertainment, is himself one of the University’s most generous benefactors. The Feld Family Foundation, a private philanthropic organization administered by the Feld family, Feld, his wife, Bonnie Feld (CAS’73), and their daughters Nicole, Alana (COM’02), and Juliette, has pledged $10 million to enhance faculty development and other projects.

Other significant donations include the record $50 million gift from trustee Allen Questrom (Questrom’64, Hon.’15) and his wife, Kelli Questrom (Hon.’15), which renamed the School of Management the Questrom School of Business; $35 million from trustee Rajen Kilachand (Questrom’74) to support the Arvind and Chandan Nandlal Kilachand Honors College and to renovate a residence hall for its students; $25 million from Frederick S. Pardee (Questrom’54,’54, Hon.’06) to endow the Frederick S. Pardee School of Global Studies; and $18 million from Sumner M. Redstone (Hon.’94) for construction of the Sumner M. Redstone Building that now adjoins the renovated School of Law tower.

The campaign has also helped to pay for the construction of the $30 million nine-story School of Medicine student residence, which opened in 2012.

It has endowed 50 professorships and both new and existing chairs, growing the faculty while relieving pressure on the budget. “Gifts of this kind have been transformative to the College of Communication in so many different ways,” says Thomas Fiedler (COM’71), dean of COM, which houses five of those chairs. “They’ve enabled us to become a leader in communications research and to put a spotlight on many of COM’s strengths, a spotlight that will enhance an already good reputation in the field.”

Fiedler says that James E. Katz, COM’s Feld Professor of Emerging Media, “has put us on the leading edge of understanding emerging media and how they affect people who are professional communicators.” As a result, he says, COM has its first cohort of PhD students researching the impact of changing communications technologies.

In addition to the new endowed professorships across the University, there are now 21 career development professorships, including 10 Peter Paul Career Development Professorships, created by trustee Peter Paul (Questrom’71) to support junior faculty for three years, jump-starting their scholarship and research early in their careers.

The campaign has brought 163 new endowed scholarships for both undergraduate and graduate students, “another direct impact on access and affordability,” Nichols says. Scholarships for undergraduates come under the Century Challenge, which appeals to donors by matching the annual financial aid payout from their gift for the next 100 years, essentially doubling the donation.

Among the gifts falling under that program are the Aaron and Candy Spelling Scholarships, endowed to reach $1 million by 2017, which will be awarded to COM undergraduates majoring in film and television. The college is already giving out a handful of these scholarships, “which will enable us to attract extraordinary aspiring filmmakers and TV writers,” Fiedler says.

Nichols says the campaign has been notable for its number of very generous benefactors. The newly established William Fairfield Warren Society, for example, which recognizes those who give at least $1 million during their lifetime, now has 123 members.

“More people have done that in this campaign over the last five years than basically through the entire period of 1839, the date of BU’s founding, to 2010,” Nichols says. “It is such a sea change for the University. We now have the great advantage of a pool of significant donors, and that’s a great foundation for BU to build upon.”

“Our alumni and friends are with us as we choose to be great,” Brown says, reflecting on the University’s future. “Working together, we are all part of Boston University’s ambitious journey as a leading private research university.”

There are 4 comments on Campaign for Boston University Goal Boosted to $1.5 Billion

Campaign for Boston University Goal Boosted to $1.5 Billion
4
share this