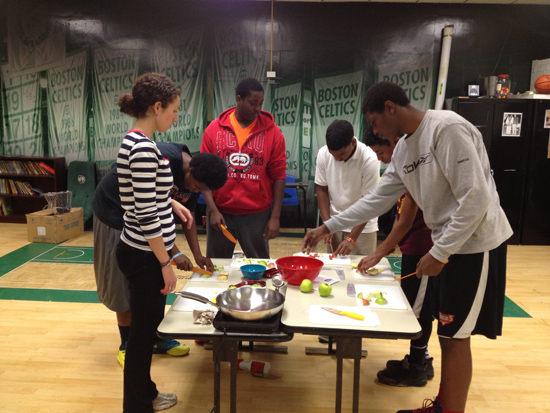 When Erin Reese and Danny Neilson asked a group of Boston teens at the Blackstone Community Center two years ago if they had ever prepared a meal, they were met with silence. Eventually one of the teens said yes. He knew how to cook cereal.

Reese (SAR’13, SPH’15) and Neilson (SAR’15), along with nutrition graduate student Gina Petracca (SAR’16), were developing the first community cooking class for the Boston University Fitness & Wellness Center (FitWell) at the Blackstone, one of 35 Boston Centers for Youth and Families (BCYF) sites, in the South End.

FitWell, a collaboration between BU and BCYF, helps provide local residents with the skills they need to make physical activity and healthy choices part of their lifestyle.

In the weekly cooking class, supervised by Sargent Choice Nutrition Center director Stacey Zawacki (SAR’98, SPH’13), the Sargent students covered topics like nutrition, healthy meal preparation, and kitchen skills, including knife safety. At the end of class, they gave the teens the ingredients needed to duplicate the meal or experiment with new recipes on their own. The following week, the young people shared their cooking experiences.

In developing and conducting the course, the Sargent students learned as much as the Blackstone teens. Reese found that soliciting their input as the course progressed kept them invested in the lessons. “They’d come to our class after nine hours of school, so we had to think of ways to keep them engaged,” she says. They encouraged the teens to brainstorm about meals for their lessons and made sure the classes were applicable to their daily lives. “Telling them that fruits and vegetables will help them fight diabetes one day wasn’t relevant to them,” says Petracca. Instead, the SAR students showed them how healthy eating choices could benefit them now—making them more fit or helping them concentrate in school. “It was a great opportunity to present healthy eating in a creative way,” Neilson says.

There were some unexpected challenges for the fledging cooking teachers. Blackstone doesn’t have a kitchen, so Reese and Neilson had to get creative with a hot plate. They also had to change the lesson plan on the fly because younger siblings often tagged along to the after-school class—suddenly children were joining a class designed for teenagers. “You don’t want to give a paring knife to a first grader,” Reese says. So instead of barring the younger ones, they gave them tasks like measuring ingredients and kept things like chopping for the older kids.

Adults at the Blackstone center had a different kind of lesson. Christina Brigante (SAR’12,’14) and Elizabeth LaMay (SAR’12,’14) taught physical fitness to those over 55 to help reduce the risk of cardiovascular disease and osteoporosis. The two physical therapy doctoral students found from a survey they conducted in spring 2013 that older Blackstone members were often avoiding the gym, “where top-40 music is playing and young, strong people are exercising,” LaMay says. “Some members of the older adult population found it overwhelming.” To ease them into the gym and encourage them to exercise, the Sargent students launched a specialized program to “get the members acclimated to the gym and equipment, and give them exercises based on what they wanted to target,” she says.

Supervised by Jean Peteet, a SAR clinical assistant professor, the students taught exercise classes once a week for two months, focusing on a specific part of the body at each session. To accommodate participants with a wide range of athletic abilities, they focused on exercises “that we could regress for people who found it too difficult, or progress for higher-level participants,” LaMay says.

The Sargent students found satisfaction in seeing their lessons continue after the classes ended, particularly when a teenager went home and made taco salad for his family or an older adult continued to exercise after class had ended for the day. Both courses have proven so popular that Sargent continues to offer them periodically. “Before FitWell opened, there wasn’t much of an option for affordable physical activity in the South End community,” says Lindsey Wallis, assistant manager of fitness at FitWell. “Programs like this help improve the members’ overall quality of life.”

Rachel Johnson can be reached at rajohnso@bu.edu.

A version of this story originally appeared in the 2014-2015 edition of Inside Sargent.

A Good Fit at Fitwell