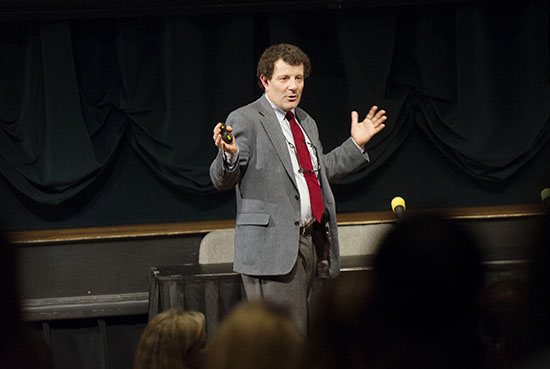 New York Times columnist Nicholas Kristof told a BU audience that empathy among the world’s affluent is key to solving the problems of the neediest. Photo by Jackie Ricciardii

“The empathy gap is one of the most important things we have to address if we want to improve outcomes” for the world’s poor children, Pulitzer-winning New York Times columnist Nicholas Kristof told several hundred at the Tsai Performance Center last week.

He spoke as part of an event titled The First 1,000 Days: Changing Lives Through Early Intervention, hosted by BU’s Program for Crisis Response and Reporting and cosponsored by the Pulitzer Center on Crisis Reporting and BU’s College of Communication, School of Public Health, and Center for Global Health and Development. The focus was on the vital importance of proper nutrition and health care from the beginning of pregnancy to a child’s second birthday, but speakers crossed a range of topics, from compassion to media ethics.

Kristof discussed the strategies for early intervention outlined in his best-selling book A Path Appears, written with his wife, Pulitzer Prize–winning writer and lecturer Sheryl WuDunn. He said that innovative, low-cost solutions are available for many childhood nutrition and health problems, helped along now by “a much greater emphasis on evidence than ever before.”

He gave by way of example that officials are learning that the conventional choices to achieve an objective, such as getting more children into school, may not be the best or most economical. It costs $350 per student to build more schools, but only $3.50 per student to provide deworming pills that improve their health to the extent that their school attendance and performance also improve.

Still, even low-cost solutions need the attention and support of the public and those who represent them.

“We come up with narratives that the poor are to blame for poverty,” Kristof said. “This has to do with narratives about personal irresponsibility and bad choices. There is no doubt there are self-destructive behaviors that accompany pathologies of poverty. But it sure seems to me as long as we’re talking about irresponsibility, we also have to talk about our collective irresponsibility, when we have solutions in hand that we know not only will create better outcomes, but will also save us money, and we still don’t go ahead.”

His talk wasn’t all serious, though. He drew laughs explaining how he and WuDunn took their children along on Third World reporting trips to build their empathy: “I was worried a little bit that Child Protective Services would intervene at some point.”

Kristof said that a personal turning point in his career came when he was reporting for the Times on genocide and hunger in Darfur in the western Sudan. While he was writing about the dire situation there, New Yorkers were transfixed by media coverage of two homeless red-tailed hawks in Manhattan. “It felt like my columns disappeared without a trace,” he recalled. In the wake of that realization, he began looking for ways to involve his audience more in the plight of the world’s needy. One way he came up with to do that was by trying to find reasonable and affordable solutions to problems that might seem intractable.

The First 1,000 Days event took its name and focus from the subject of a planned book by another speaker, former Wall Street Journal reporter Roger Thurow, who is following groups of women in Africa, Guatemala, the United States, and India through the 1,000-day period from conception when a child begins crucial cognitive and physical development. “My mantra is to outrage and inspire,” said Thurow, now a senior fellow on global agriculture and food policy at the Chicago Council on Global Affairs. “What’s wrong with us that we brought hunger into the 21st century?”

Along with Rhitu Chatterjee, a contributor to Public Radio International’s The World, who has been analyzing the impact of free lunch programs in India and Brazil, and Sandro Galea, dean of the School of Public Health, Thurow was part of a panel that preceded Kristof’s talk. The three discussed ways to improve early childhood health and nutrition around the world. They talked about the impact of early childhood “stunting” on issues from a child’s future health and cognition to education and future income. Stunted growth, primarily because of nutritional deficits and disease, affects one in four children in the world.

Galea also noted that our society spends huge sums on curative medicine that helps a relative few and proportionately less on public health programs that could prevent many more from getting sick.

The panelists were introduced by Thomas Fiedler (COM’71), dean of COM, and Robert A. Knox Professor Jonathon Simon. The participants also delved into how journalists and public health staffs might better work together to bring long-term public health issues to the fore. On that topic, the audience heard from Jon Sawyer, executive director of the Pulitzer Center on Crisis Reporting.

The work of the BU Program on Crisis Response and Reporting will be needed going forward if these issues are to be addressed, according to Kristof, who told some dispiriting tales of changes in the news business. “These issues won’t be addressed if they’re not covered, if they’re not on the agenda,” he said. “If you think we’ve done a lousy job the last 15 years, wait till you see the next 15.”

What’s the remedy? Kristof offered two guidelines for journalists and other storytellers trying to inspire empathy.

“It’s about individual stories that open a pathway. It’s not a rational process; it’s an emotional one,” he said. “And the other part of it is, there has to be some sense that there can be a better outcome. If it’s just gloomy and despairing, it doesn’t work, and people tune out.”

There is 1 comment on NYT’s Kristof: Changing Lives through Early Intervention