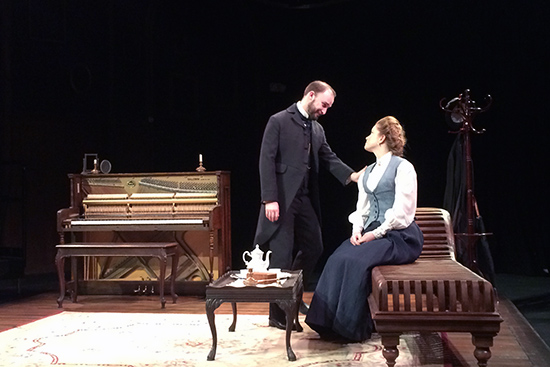 Ruhl’s play, which debuted on Broadway in 2009 and was nominated for a Tony Award, is set in the 1880s. The story unfolds in two rooms, a parlor and the consulting room of the reputable physician Dr. Givings (Caleb Cedrone [CFA ‘15]). A specialist in treating “hysteria” in women (this vague, stigmatizing diagnosis wasn’t officially removed from psychiatric manuals until 1950), Givings uses the recent innovation of electricity to dispassionately administer strategically placed jolts to a Mrs. Daldry (Ellen Humphreys [CFA ‘15]), who has been suffering from headaches and crying spells. Dr. Givings assures Mrs. Daldry’s concerned husband that she will be healthy after a few sessions of his breakthrough therapy. Meanwhile, Givings’ own wife, Catherine, yearns for a more satisfying sexual life with her husband, and her scenes offer some of the play’s most poignant moments.

In a 2009 review in the New York Times, Charles Isherwood praised the play as an “inspired new comedy,” noting that in Ruhl’s telling, “Application of that electrified wand in the doctor’s hand may inspire shuddering moans, guttural cries and exhortations to God, but the instrument is considered by patient and doctor alike to be no more naughty than a stethoscope.”

Staging the play in Lane-Comley Studio 210 adds a level of intimacy to a work normally produced on a proscenium stage, says Boris. Though it inspires laugh-out-loud moments, Ruhl’s work has many dimensions, including instances where audience members may find themselves shifting uncomfortably in their seats. “It’s so easy to look at it and say Mrs. Daldry is just looking for sex, but actually she’s looking for a full mind-body connection,” says Boris.