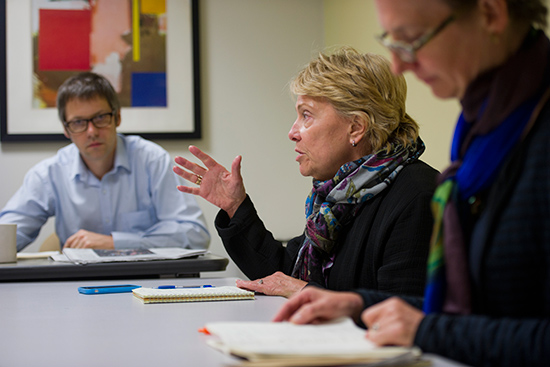 A new kind of journalism has come to the United States, courtesy of a partnership between the College of Communication and the global news organization the Conversation. In a twist on the traditional news model, the Conversation offers a unique collaboration between academics and editors: teachers and researchers are invited to write news commentary and essays on subjects related to their fields of expertise, and the organization’s staff journalists work with them to make sure their language is clear enough for the average reader to grasp.

The Conversation launched in Australia in 2011 and expanded to the United Kingdom last year. Here in the United States, it will work out of an office on Comm Ave, a block away from COM. The nonprofit news organization—which receives funding from tte Howard Hughes Medical Institute, the Alfred P. Sloan Foundation, the Robert Wood Johnson Foundation, and the William and Flora Hewlett Foundation (BU is the first US university to contribute)—has already published more than 20,000 articles by 14,000 academics across the globe, and boasts an international audience of more than 2 million readers.

COM Dean Thomas Fiedler (COM’71), a former Miami Herald editor and a member of the Conversation’s editorial board, likens the site to “reading a really smart op-ed page.” He quotes Carnegie Corporation of New York president and academic Vartan Gregorian, a BU trustee from 1976 to 1989 and an honorary trustee for life, who has said that while journalism “must be present for democracy to flourish,” there’s no place for the shallow, unbalanced reporting so prevalent today. “Dr. Gregorian envisioned what he called ‘knowledge-based journalism,’ where the news of the day is produced by acknowledged experts in the subject at hand,” Fiedler says. “The Conversation embodies that vision. The scholars whose bylines appear over every article are truly experts in that subject. The editors who collaborate with them ensure that the articles can be easily read by nonexperts. The Conversation sets a new standard for journalistic excellence and it’s appropriate—and exciting—for Boston University to help bring that to the United States.”

“The Conversation is a journalism project,” says Andrew Jaspan, the site’s executive director and former editor-in-chief of the Melbourne, Australia, daily newspaper the Age. “Authors are specialists in the subject matter they are writing about,” he says. “They then work with an editor to put it into plain English. We’re getting the academic voice back out there, but with journalistic flair.”

When Jaspan began thinking about bringing the website stateside, he reached out to former colleague Alexander MacLeod, a lecturer in BU’s Study Abroad London program. MacLeod put him in touch with Fiedler about seven months ago.

Jaspan says basing the Conversation at BU made sense partly because of the University’s location in Beantown, “arguably the heart of the academic community in America,” he says. “In Boston, there’s a reflective feel towards the news. We’re not here to get the news first. There’s a saying about Fox News: ‘Never wrong for long.’ That’s not us.”

At a recent morning editorial meeting, the staff of journalists and editors sat around a large wooden table, laptops and folded newspapers spread out around them. Science and technology editor Maggie Villiger (COM’00) pitched two ideas: finding academics to write about how climate change affects fall foliage and a piece on Medicaid expansion. “Scientists do such interesting research, and too often that news is moldering away in scientific journals,” Villiger says. “The Conversation is a great way to help them disseminate their life’s work and let the rest of the country know what is happening in the hallowed halls of academia.”

In its first few months of publishing stateside, the site will post between 10 and 15 new stories a day, orchestrated by a team of 10 professional journalists led by US editor Margaret Drain, an Emmy– and Peabody Award–winning producer and former vice president of national programming at WGBH, Boston’s PBS television station. The site uses a specially designed publishing and content management system that alerts academic authors if they’re using too much jargon as they type. It also enables the author and corresponding journalist to work together on articles in real time.

Stories on the Conversation run the gamut; recent posts include an argument from a lecturer at the Centre for Peace and Conflict Studies at the University of Sydney that politicians and the media are not doing enough to curb rising Islamophobia, a warning from an internet government expert at Columbia University that the US tech bubble is about to burst, and an essay from a lecturer in media studies about why he is excited about the return of Twin Peaks. In an effort to share information, stories are published under a Creative Commons license, so any story can be shared or reposted for free with proper credit.

Another important goal of the website is to help rebuild trust in journalism. For that reason, authors and editors must sign the site’s editorial charter, as well as abide by its community standards policy. Authors write only on subjects they are experts on, and they must disclose any funding or potential conflict of interest. The Conversation’s website notes that it is “committed to knowledge-based journalism,” with academics and researchers working with journalists “to provide evidence-based, ethical, and responsible information.”

In its search for US academics, the site reached out to members of the Association of American Universities, which BU joined in 2012, because association membership ensures a “quality threshold,” Jaspan says.

Why would a professor want to write an article for the website, seeing that they weren’t being paid? It adds to an academic’s professional experience, according to Jaspan, as professors seeking tenure are often asked to show how they have impacted society. After an article is posted, authors have access to numbers and data about how many people have read and shared the story.

Maria Balinska, the site’s deputy editor and a former BBC journalist, says she was drawn to the Conversation in 2011 because it presents timely news, but with more insight than a typical news story. “It’s not that journalists are always getting it wrong, but academics want to get their point across,” she says. “I like the model—the academics are specialists in the area they study, and we, as journalists, are specialists in telling stories.”

Jaspan says that internship opportunities for BU students may be available in the future.

Are you a BU professor interested in writing for the Conversation? Find out how here.

The Conversation Comes to the United States, via BU

The Conversation Comes to the United States, via BU
0
share this