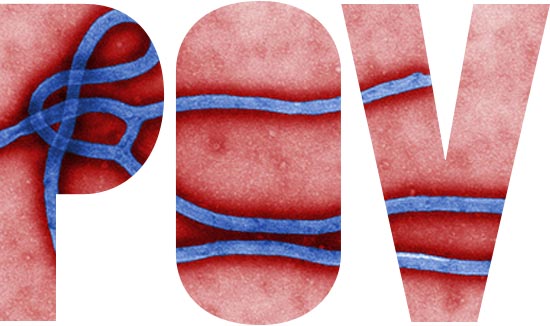 Photo by Frederick A. Murphy/CDC

I can’t hear the three words “point of view” without instantly thinking of my dad! “Here’s my point…” is probably one of his favorite phrases, and I guess he’s not alone. Doesn’t everyone have some point or other they want to get across in conversation, on the Internet, in the press? So let’s cut to the chase, here’s my first point and it’s short and snappy: I do not have a death wish. We will return to my father and his points later on.

Second point, I am fascinated by viruses! As nature’s nanomachines, they are incredibly diverse and come in more “flavors” than all the plants, animals, fungi, bacteria, and other unicellular organisms on earth put together. Why? Because as the nursery rhyme says, “Big fleas have little fleas, upon their backs to bite ’em, and little fleas have lesser fleas, and so, ad infinitum.” Long before we knew what they were, we saw what they did. Paralysis and, if you survived, lifelong disability due to polio; foaming and snapping animal jaws and the deadly hydrophobia in humans infected by rabies virus; the death of tens of millions in the 1918 influenza pandemic; and so on. As invisible, transmissible harbingers of disease, it’s really no wonder they don’t have such a great press, why the general public knows so little about them, and why they engender such fear.

Taming, and even eradicating, some of these pathogens from the face of the globe has been a triumph of medical research. Observing the resistance to smallpox of milkmaids previously infected with cowpox led Edward Jenner to develop the principle of vaccination. Proving that he also didn’t have a death wish and was also a father capable of making a point, he showed that people, including his own son, who had been exposed to pus from cowpox lesions, were protected from smallpox, albeit in a very eighteenth-century manner. Of course this new idea was not adopted without some controversy, and there is a classic 1802 Punch cartoon entitled, “The Cow Pock–or–the wonderful effects of the new inoculation!” showing people sprouting cow-like appendages from various parts of their bodies. I think of this as the nineteenth-century equivalent of a tweet from the anti-vaccination advocate Jenny McCarthy.

Over the years, the “isolate, attenuate, and vaccinate” paradigm was developed. Take poliovirus as an example: the agent was isolated from patients, grown in the laboratory, and then it was weakened (or attenuated). Following immunization, the vaccine replicated in people, did not cause disease, and led to the generation of antibodies which could fight off infection by the wild-type virus.

So here’s the challenge! How do we balance our desire to create a vaccine with the need to isolate and attenuate dangerous agents when the first stage of the process demands we bring agents that paralyze, cause apparent madness, blister the skin, lead to hemorrhaging, cause heart and lung failure, or dreadful pneumonia into the laboratory from the wild? How can we dissect the critical steps involved in virus infection, spread, and transmission as viruses continue to emerge from animal reservoirs to infect people when they do just that—make people sick? Can we, should we, continue to work to tame these agents of disease in the laboratories of the world?

Someone once said, “Keep your friends close and your enemies closer,” a mantra adopted by scientists worldwide as one pathogen after another has been isolated from nature and grown in laboratories. This “know your enemy” approach has served society well and has been critical in the development of vaccines against many major human and animal diseases. Smallpox has been eradicated from nature; polio is no longer a global problem, having been eliminated in all but a few countries; and a number of other severe, often fatal, diseases are no longer widespread threats.

We quickly forget that prior to the development of the measles vaccine, between seven and eight million children died every year because of this virus infection. Although measles virus is one of the most transmissible pathogens known, in the 1950s scientists assessed the risk of isolating it, decided that this could be done safely and the risk was worth taking, weakened it, and successfully developed a highly effective vaccine to protect against it. Now, due to widespread measles vaccination the number of global cases has fallen by over 99.9 percent. However, nature is full of surprises such as Middle East respiratory syndrome (MERS), Chikungunya, and Ebola virus, which now dominates social and other mass media outlets. Far from being safe, they are just a plane ride away, and viruses are everywhere, not just in research laboratories.

It’s been quite a year for virologists. A new term, “gain of function,” has been added to our vocabulary as a catchall for studies that aim to understand what it takes for an influenza virus to spread from one mammal to another. Points have been made about whether it is wise to help influenza become more transmissible in an animal model and that such “risky” experiments should not be undertaken. Recently, trust has been damaged by the surprise finding of 60-year-old samples of smallpox in a freezer at the National Institutes of Health and the inadvertent shipment of infectious anthrax and highly pathogenic avian influenza virus from the Centers for Disease Control and Prevention. Points have been made about errors in sample tracking and failures to adhere to standard laboratory protocols. In the past few days, the US has been gripped by the arrival in Atlanta of an American doctor and technician who were infected with Ebola virus in Liberia. Points have been made that such individuals should have to suffer the consequences if they get infected and they should not be allowed to return back to the US.

Closer to home, the maximum containment National Emerging Infectious Diseases Laboratories (NEIDL) at BU cleared all the legal challenges and this world-class, state-of-the-art facility is ramping up to secure the necessary permissions to begin work. Points have been made—even by some in the medical community—that we should suspend all research at such laboratories until a review of recent laboratory mistakes at CDC is performed because the perceived risks are believed to outweigh the benefits, and that the number of facilities working on dangerous pathogens should be dramatically reduced. I consider such points misguided.

The good ship Twitter acts as a wonderful mixing vessel for the amplification of these points. Just like viruses replicating inside a cell, opinions and points transmit indiscriminately and insidiously and, in the absence of meaningful context, at best simply scare people or, worst case, have significant adverse effects on public health. The influence of anti-vaccine activists has already resulted in more measles cases in the US thus far in 2014 than in the last 20 years combined. Dissecting truth from fiction in a sea of comments when everybody in the world seems to have a point is not a trivial pursuit. This is why I am convinced it’s critical for researchers to engage with other scientists and the general public proactively, rather than keep their heads down and attempt to fly below the radar.

To help provide a perspective from the individuals who work on these problems and address some of the concerns being raised, we recently took a big step and founded Scientists for Science (SfS) and #scifsci with a view to developing a forum to inform and educate, and “foster open and unbiased discourse on how to address these important contemporary issues in microbiology.” Collectively, SfS are convinced that banning certain types of experiments or closing facilities is not rational and are “confident that biomedical research on potentially dangerous pathogens can be performed safely and is essential for a comprehensive understanding of microbial disease pathogenesis, prevention and treatment.”

Small steps closer to home are also important. My parents, like many BU staff, City of Boston elected officials, journalists, local community residents, and middle and high school kids were fortunate to tour NEIDL to see my laboratory firsthand and appreciate all the safety and security systems in place. Unsurprisingly, after the tour my dad had a point. “Here’s my point…why would anyone want to work in a place which wasn’t safe?” he said. On that occasion I happily ceded to his point! I do not and will not, and in that I’m pretty representative of all the other virus-taming scientists I know.

Paul Duprex is an associate professor of microbiology at the School of Medicine and director of the Cell and Tissue Core at Boston University’s National Emerging Infectious Diseases Laboratories. He can be reached at pduprex@bu.edu. Follow him on Twitter @10queues.

Read all stories in our series “Battling Ebola” here.

There are 3 comments on POV: Battling Ebola. It’s Our Problem, Too

POV: Battling Ebola. It’s Our Problem, Too
3
share this