Mark Grinstaff flips quickly through his lecture slides, some showing honeycomb-like molecular structures, others equations and tables describing the properties of various compounds. Welcome to biomaterials class, a two-hour-long sally into the scholarly mysteries of chemistry and biomedical engineering, but one that is brought back to earth in purposeful discussions about the real-world applications of the science displayed on the screen.

Grinstaff, with a long graying ponytail and wire-framed glasses, moves through his material quickly, yet without hurry. He’s relaxed. He’s teaching, which is one of the two things he does best, up there with finding real-world solutions to seemingly insoluble medical problems.

Grinstaff tells his class about a current medical device, a polymer film that is placed over interior incisions and wounds to prevent growth of fibrous tissue that hampers healing. The only problem, he says, is that the filmy biodegradable barriers move around and don’t cover wounds evenly.

“If you could figure out how to prevent all adhesions after surgery, it would be great,” says Grinstaff, a College of Arts & Sciences professor of chemistry, a College of Engineering professor of biomedical engineering, and a member of the ENG Division of Materials Science and Engineering. “I’d love to figure out how to do it.” Grinstaff, who is also the director of the Center for Nanoscience and Nanobiotechnology, was recently named the inaugural ENG Distinguished Professor of Translational Research.

The comment is equal parts self-deprecation and inspiration. Above all else, Grinstaff is a puzzle-solver. The professor, who also has an appointment in the School of Medicine pharmacology and experimental therapeutics program, likes nothing better than a difficult medical challenge.

For 11 years, his Grinstaff Group, a lab with more than 20 graduate students and postdoctoral fellows, has been combining members’ expertise in chemistry, pharmacology, and biomedical and mechanical engineering to tackle complicated medical challenges. Three of the group’s projects have moved from basic scientific exploration to biomedical devices or materials that students—with Grinstaff’s guidance—have commercialized. At least four privately held biotech companies have spun off from research started under his watch: HyperBranch Medical Technology, which develops biodegradable surgical sealants for wound closure; Affinergy, which makes coatings that facilitate cell growth on metal surfaces; Flex Biomedical, whose lubricants are aimed at treating orthopedic diseases; and AcuityBio, which makes flexible films to treat early-stage lung cancer. 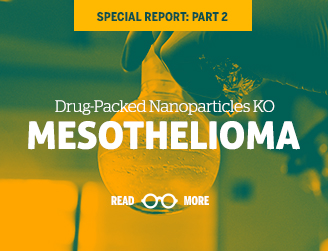 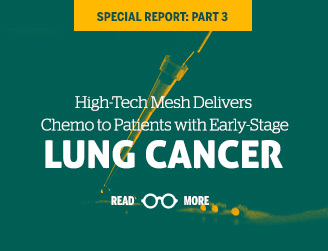 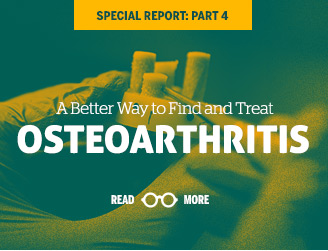 HyperBranch Medical Technology’s sealants are already being used by surgeons worldwide; the other three companies’ products are still being tested in large animal studies—the research step before clinical trials and potential US Food and Drug Administration approval.

Reflecting Grinstaff’s multiple interests and range of expertise, his group never focuses on one problem at a time. Among the more advanced projects, two are developing novel methods to deliver drugs directly to tumor cells of particularly pernicious cancers. In the early-stage lung cancer group, students have designed a variety of flexible polymer films that can be stapled along lung tissue where a tumor has been removed. A chemotherapy drug, like paclitaxel, embedded within the film releases slowly over time to attack new generations of remaining cancer cells. Other students are creating nanoparticles that are absorbed by late-stage mesothelioma tumor cells, then expand, and like microscopic Trojan horses, release chemotherapy. A third group hopes to find better ways to diagnose and treat damaged cartilage tissue.

Students are also developing bandages that gently and painlessly wash off, with an eye toward reducing the misery of wound care for second-degree burns. Others are building a diagnostic tool that would size single strands of DNA—an essential step in identifying pathogens that cause menacing bacterial diseases, such as staphylcoccal infection and meningitis, with Amit Meller, an ENG associate professor of biomedical engineering. And another group is building a lithium ion battery that can be used for oil and gas exploration.

Grinstaff’s problem has never been coming up with an idea; it’s narrowing the list of  ideas to those that are most promising. “If I find the idea sticks around for several months, I decide it must be a good idea,” he says. “And if we could investigate a topic and understand something new, and at the same time address an unmet clinical need, I feel we’re getting a two-for-one. We get to do the basic research, and hopefully what we do will contribute to society in a positive way.”

And, he says, “if you can go to the literature and find something someone’s done that’s like this, I don’t want to do it. I’d much rather take a bigger risk and try to answer a more challenging or more risky question.”

Fortitude and a little gumption

Grinstaff recruits students carefully, looking for intelligence and a few other things. His students must be motivated, independent, and share his passion for tackling hard problems—which means they need the stamina for a seven-day workweek.

“Not every day is a good day in the lab,” Grinstaff says. “You need to be able to get up every morning, have a smile on your face, come to lab, have it be a difficult day, and do the same thing the next day.” Some of his students have toiled for three years without progress. “One must have some fortitude and a little gumption to be able to pull that off.”

And that gets to the heart of his mentoring mantra: he doesn’t train technicians—he trains scientists and engineers. “It’s my job to provide an environment for them to work in, stimulate them, and get them excited,” he says, “but also to give them some freedom to learn, develop, and become very good researchers and leaders. I feel it’s my role to pose the questions and then help them with solutions.”

“He never limits us; he always pushes us to explore,” says chemistry graduate student Marlena Konieczynska (GRS’16). She appreciates that when Grinstaff returns from a conference, he shares what he’s learned. “He treats everyone with respect, and he’s always polite.”

When students enter his group, Grinstaff tries to match them with a project suiting their particular interests, keeping in mind the proper balance of expertise among students. More senior members act as mentors for newbies as projects pass from one generation to the next. By graduation, they must know how to design and complete an experiment, publish their work, present it at conferences, and break it down in everyday language.

“They need to be able to communicate to me as well as to my mom, who doesn’t know any science or engineering,” Grinstaff says.

On a Friday afternoon, he sits at one end of his desk, an orderly space where a tennis ball perches next to a molecular model kit. Posters of Picasso’s Guernica and the Côte d’Azur adorn the walls. A calendar by the window is open to two months from now.

Next to him sits Stacy Chin (GRS’17), a second-year chemistry graduate student, who is here for her monthly mentoring session. She’s been working on polysaccharides that could serve as delivery vehicles for substances like nucleic acids. The idea is that cancerous cells could use these building blocks to reprogram rogue genes, rendering them harmless.

A no-brainer for engineers

A Grinstaff Group project will often start on the chemistry end. Once a new polymer or compound has been perfected, it’s passed along to engineering students to design novel applications. As one chemistry graduate student puts it, “The goal for chemists is to make something reliable, reproducible, and a no-brainer for engineers.”

“So, what’s going on?” Grinstaff asks casually as he leans over Chin’s research summary.

Chin quickly reviews various stages of her recent experiments, but when she pivots to her future plans, Grinstaff interrupts. He wants more detail about everything she’s said. They turn to her National Science Foundation fellowship application, which he reads silently while Chin fidgets in her chair. Then he suggests a few ways to beef up her research narrative to pique reviewers’ interest.

Aaron Colby (ENG’09,’14) passes by Grinstaff’s office and delivers an invitation from collaborators who have asked them to talk about the mesothelioma project, mentioning that there’ll be plenty of New Zealand wine that will need tending.

“That’s a subtle bribe,” Grinstaff says. “‘Mark, please come drink wine with us.’” Without missing a beat, he spins around his chair to pull up a desktop calendar full of colored blocks indicating other commitments. He finds a space and adds the talk to the lineup.

Julia Wang (ENG’17), a second-year graduate student in biomedical engineering working on the early-stage lung cancer project, says no one falls through the cracks in the Grinstaff Group: “There are 20 people in our lab, and Mark manages to be on top of all their projects.”

Grinstaff lives by an open-door policy, and his students appreciate that access. They drop by his office to troubleshoot problems they’ve encountered in the lab, and he joins them for lunch in the students’ shared office space. They meet with him monthly for mentoring sessions. And they all gather on Friday mornings for coffee- and bagel-fueled research presentations, the students grilling each other as much as or more than their leader does. There’s a whiff of competition among group members, but it always remains friendly. “We do push ourselves,” Wang says. “We have that mentality, ‘I see you working hard, and so I’m going to work hard too.’”

Outside the lab, the group has gone on ski trips and shared marathon dinners after a long day of conferences. For Halloween, they even dressed up as Mark, jauntily wrapping around their necks copies of his signature orange scarf.

While he has high expectations, his approach is more godparent than Godfather. “He is understanding that we are people that have lives and sometimes unexpected things come up,” Colby says. “Sometimes people need a break if they just had a crazy last three months.”

Colby’s first exposure to Grinstaff’s lab was as an undergraduate working on his senior thesis; now he’s writing his dissertation as one of the most senior members of the group. He remembers spending much of his first year popping into the professor’s office with quick questions. In time he learned how to address the “nitty-gritty” elements of his research, only occasionally consulting his mentor.

“I am so much more comfortable now just designing experiments, planning them, executing them, and interpreting them,” he says. “That whole package, I think, is very much what graduate school is about.”

There is 1 comment on From Grad Students to Groundbreakers