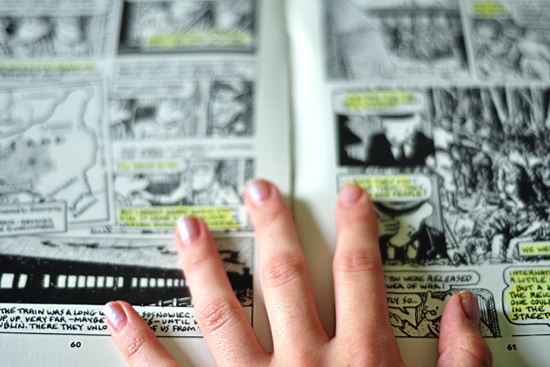 Laura Jimenez, a SED lecturer, has undertaken a study to determine whether including graphic novels in a curriculum results in more or less learning. Photo by Katelyn LeBlanc

Laura Jiménez is an “expert reader” of graphic novels, though until graduate school she had never read one—much less read one with expertise. A book-length story narrated through text and illustration, a graphic novel “looks like a book and smells like a book, and you can flip the pages,” says Jiménez, a School of Education lecturer of curriculum and teaching. “I thought reading a graphic novel couldn’t be that different from reading a book. That idea was quickly knocked out of my head.”

Jiménez stumbled into the genre in 2009 when, knee-deep in PhD research about adolescent reading motivation and comprehension, she learned that school librarians were having trouble keeping graphic novels on the shelves. Children were clearly motivated to read these books, and after Art Spiegelman’s Maus became the first graphic novel to receive a Pulitzer Prize, in 1992, teachers had started using them in the classroom (many used Maus to teach about the Holocaust and memoir, for example). In their eagerness, teachers were “going directly from the fact that kids want to read graphic novels to putting them into their hands, without doing much work on the benefit to readers.”

Jiménez is doing that work now. To learn whether graphic novels benefit students, she is developing a study involving two groups: one in which students will use the traditional curriculum, and one in which they will also read graphic novels about the subject they’re studying. She will measure the students’ engagement with the material and their motivation for learning, and assess if the use of graphic novels facilitates more or less learning.

In the meantime, Jiménez uses her existing research on graphic novels to help teachers who are already using the texts. “Because most teachers are not avid readers of graphic novels, it’s difficult for them to know what’s good,” she says. “People really needed a resource about how to read, rather than what to read.” That’s why Jiménez started the blog Booktoss, where she discusses and reviews graphic novels to give teachers a foundation for working with the texts. “If we can teach educators how to read like experts, they may be more likely to use books that are complex, interesting, and rich.”

So how do you read graphic novels like an expert? Jiménez addressed this question in her PhD research, which she draws upon in her blog to illuminate the nuanced process of reading graphic novels. “If you want to understand the most effective way of reading in a specific genre, you go to the people who do it best—expert readers—and you study them to see what they are doing,” she says. To understand how to read a historical document, for instance, you would study a historian’s method for interpreting the text. “Usually an expert is defined as a PhD in chemistry or someone who’s written 15 books on Japanese internment camps, or whatever. Graphic novel readers don’t have that kind of legitimacy yet.” So she established her own group of experts: librarians, bookstore owners, authors, and “the guys who hang out in gaming shops and can talk about every issue of Aquaman.”

Jiménez found that graphic novel expert readers begin by skimming the book, surveying the artwork, genre, and style before even focusing on the first page. On page one, they study the background, setting, and time period. Once they are grounded in the world of the novel, they study the characters and determine the mood of the book from the colors used—all before reading even one word. “It’s very active,” Jiménez says. “The ways expert readers attend to illustrations, including color palette and style—and even the paper the novel is printed on—are key to their evaluation process.”

Jiménez trains the students in her SED children’s literature course to implement these skills when reading unfamiliar texts. While the majority of her students are at first uninterested in graphic novels and find reading them difficult, many gain an appreciation for the genre once they achieve reading proficiency. A few have even gone on to use graphic novels in their own classrooms. “SED’s research agenda is directly tied to helping students,” Jiménez says. “My work in graphic novels is important because of the possibility that a different medium might provide an entry point for struggling readers, challenge gifted readers, and help more students learn. We need to know in order to best serve students in the classroom.”

Jiménez has the following tips for teachers who are graphic novel novices:

Look for complexity: “You have to read a graphic novel several times, through different lenses. So first, you may look at it as a story. What’s the story about? Are there complex characters? Is there more than one story? You should have the same expectations for a graphic novel that you have for a great piece of print-dominant literature.”

Analyze for inclusivity: “The Bechdel Test for Women in Movies is a great way to read graphic novels for inclusion,” Jiménez writes on her blog. “Just ask yourself these questions: Are there two women who have names? Do these women talk to each other? When they talk, is it about something other than men?”

Study the relationship between words and images: “The words and images in graphic novels should push each other to make a greater whole than either one is capable of on its own,” Jiménez writes. “When images and words are closely aligned, they support each other without pushing too many boundaries. When the alignment is irregular or disconnected (as in works such as V for Vendetta by Alan Moore and David Lloyd, or American Born Chinese by Gene Luen Yang), the works are more challenging.”

A version of this story was originally published in the fall 2013/winter 2014 edition of @SED.

There are 2 comments on Graphic Novels 101