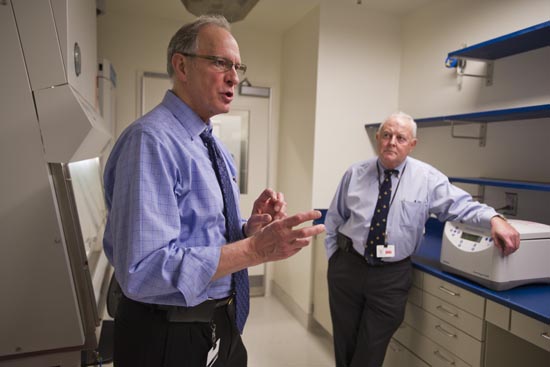 On August 2, the first of two sickened American health care workers was flown from Africa to a special containment unit at Emory University. Despite the risk of infection, medical personnel continue to travel to West Africa to help bring under control the worst Ebola outbreak on record, which according to the World Health Organization (WHO) has killed more than 900 as of August 6. WHO plans to spend $100 million to fight the outbreak, and the Centers for Disease Control and Prevention will send 50 more disease control workers. In this weeklong Special Report, BU Today talks to Boston University researchers in several fields about why medical personnel confront the risks; the ethical and political dilemmas presented by the outbreak; how the virus kills; efforts to design effective therapies; and other aspects of this unprecedented outbreak of Ebola.

Construction of the NEIDL, on the BU Medical Campus in Boston’s South End, was completed in 2008 at a cost of $200 million, with the majority of the funding—$141 million—provided by the National Institutes of Health. The 192,000-square-foot laboratory is part of a national network of secure facilities dedicated to the development of diagnostics, vaccines, and treatments to combat emerging and reemerging infectious diseases.

BU Today: Can you give us an idea of the global extent of the harm done by
infectious diseases?

Corley: Infectious diseases kill millions of people every year. The three largest killers are malaria at more than 1 million a year, HIV/AIDS at about 2.5 million a year, and tuberculosis at about 1.9 million a year. The economic impact of these diseases is almost incalculable, although a number of models to attempt to do so have been developed. Costs include not only the expense of treating patients, but screening blood supplies, public health services, missed work, etc. In developing countries, it is a burden that contributes to the inability of these countries to progress economically.

The NEIDL is committed to work on a subset of infectious diseases that are considered “emerging” or “reemerging.” These are diseases that have either never been seen before, or those that have existed but are becoming more problematic because of antibiotic resistance, failure of controls, and/or lack of vaccination. Mumps is an example of that.

Murphy: The harm done by infectious diseases around the world is immeasurable—from antibiotic resistant tuberculosis to influenza to diarrheal diseases to viral hemorrhagic fever viruses—to say nothing of new infectious diseases that emerge, mostly from spillover from animals to humans.

How often does a new disease come along?

Corley: A new infectious disease is recognized every 12 to 18 months. We can expect new pathogens that cause human disease to be detected in the future, perhaps at an accelerating rate due to the increased encroachment of humans on animal habitats and global climate change.

What is important and concerning about newly emerging infectious diseases is that the impact on humans is generally severe: the pathogens often cause more severe illnesses and the death rates are often higher. Many of these arise as the result of “species jumps,” where pathogens move from a reservoir species and infect humans. Sometimes they cannot directly be transmitted from human to human, like some of the avian influenzas, unless they undergo some important genetic changes through mutation, while other times they can. Severe acute respiratory syndrome (SARS) was a good example, as is Middle East respiratory syndrome (MERS) and Ebola, highlighted by the current outbreak in West Africa.

Given the fact that we live in a global society, and global travel is part of our daily lives, it doesn’t matter where a disease outbreak occurs—we are but 36 hours from these diseases at any given time.

Which diseases are the most problematic?

Murphy: All those that are untreatable—extreme drug-resistant tuberculosis to the hemorrhagic fever viruses. You could also add into that mix secondary infections after influenza that are antibiotic resistant, as well as all of those diseases that we have an effective vaccine for but that people choose not to become immunized for and are reemerging—measles, whooping cough, etc.

Which diseases present the most difficult challenges to finding a therapy or a cure?

Corley: The most difficult challenge is how little we understand about infectious diseases in general, and in particular about the newly emerging infectious diseases. A lot of basic science to understand the pathogens—bacteria or viruses—is still required in order to identify targets that might be sensitive to therapies, or to identify targets on the pathogens that could serve as broadly effective vaccines. Because these diseases cause significant morbidity and mortality, they must be worked with at higher containment levels, either BSL-3 [biosafety level 3] or BSL-4. These containment levels are designed as layers of protection by engineering design, enhanced personal protective equipment, standard operating procedures to ensure safe handling of pathogens, and training to ensure that personnel are prepared for the challenges of working in BSL-3 and BSL-4 laboratories.

Murphy: The most challenging diseases are caused by RNA viruses. It’s very hard to develop an effective vaccine, and in the case of HIV it took years to develop the concept of combined therapy. I would also say the hemorrhagic fever viruses because of the small number of containment laboratories that can study their molecular pathogenesis safely.

How many researchers will work at the NEIDL when it is fully operational?

What is the potential of NEIDL research?

Corley: The NEIDL has the potential to be a leading center for infectious disease research, second to none. Not only is it positioned to recruit biomedical researchers in the fields of infectious diseases, microbiology, and immunology, but computational biologists, engineers, chemists, and ecologists—all key to solving the complex questions of where these pathogens come from, how they are transmitted, what is the course of infection and disease, and how do we break the cycle.

The NEIDL also has the advantage of being in a university setting, and thus will serve as a key training ground for the next generation of scientists who can put their talents to use to tackle infectious diseases.

Corley: Currently, we have work going on at BSL-2 and BSL-3. The latter includes tuberculosis research. We are preparing to expand the number of researchers during the next month as more faculty move their BSL-2 laboratories into the NEIDL, with anticipation of complete opening of BSL-3 and BSL-4 following the completion of the regulatory process over the next few months for BSL-3 and over the next year for BSL-4.

What diseases will researchers with permission to do Biosafety Level 4 research be working on?

Corley: This is dependent on the researchers, their expertise, and funding. The first work will be on Ebola and Marburg viruses—collectively known as filoviruses—by Dr. Elke Mühlberger and her research group. Additional viruses will be included as we recruit new faculty.

How exactly are our researchers collaborating with researchers at other labs who do level 4 research?

Corley: Currently, John Connor has been collaborating with researchers at the U.S. Army Medical Research Institute of Infectious Diseases (USAMRIID) and more recently the NIH’s Integrated Research Facility in order to conduct research on diagnostics and biomarkers for viral diseases, including Lassa fever and filoviruses. Dr. Mühlberger has had members of her laboratory working at existing BSL-4 laboratories in order to get some of their work done. However, these labs cannot provide the significant time needed to make the progress that Dr. Mühlberger expects to make when she has access to the NEIDL’s BSL-4 laboratories.

Tomorrow: Why Researchers Need to Work with Deadly Pathogens. Read all stories in our series “Battling Ebola” here.