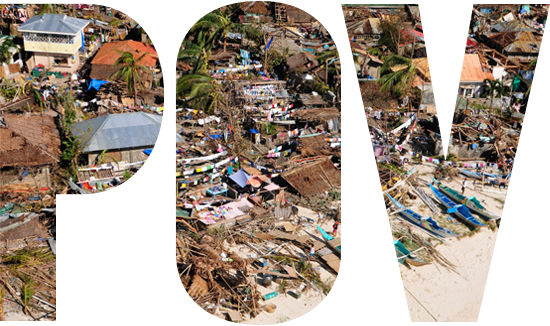 Typhoon Haiyan, which slammed into the Philippines in early November, killed nearly 5,000 and left a wide swath of ruin, homelessness, and human despair. Haiyan was perhaps the most powerful storm on modern record, rivaled or exceeded only by 1969’s Hurricane Camille along the US Gulf Coast.

While the initial estimates of the Haiyan death toll of 10,000 have been revised downward, images instantaneously transmitted around the world of bodies in trees, burial trenches packed with lime-sprinkled body bags (some heartbreakingly small), and families picking through rubble for the most basic needs of sustenance cannot fail to catch the attention of the world.

Perhaps the images and stories may even distract some of us from the latest episodes of American Idol and The Walking Dead, when it is the real dead with whom we should be concerned. And let us not forget that the United States is not immune from such events as Haiyan. Hurricane Katrina in 2005 killed between 1,500 and 3,500 persons, mostly in Louisiana. Katrina’s final death tally is still debated.

Being innately curious beings, we humans like to find the cause for just about any event, and in particular, we assign fault as we seek explanation for crises, be they epic natural disasters or human-induced events from a single-vehicle car crash to a world war. And thus we natural scientists are commonly asked, “Was (insert name of most recent big storm here) caused by global warming?”

As Professor Kerry Emanuel of MIT, who is perhaps the world’s top expert on such matters, frequently points out, the short answer is that we cannot uniquely pin single events to global warming. The phrase “correlation does not imply causation” is appropriate. Indeed, Emanuel, writing in Foreign Policy magazine after last year’s Superstorm Sandy (which was almost exactly one year before Haiyan’s Philippines landfall), notes that “attributing Sandy or any other single event to long-term climate trends is rather like blaming El Niño for a car accident on the Santa Monica Freeway.”

Keeping that caution in mind, however, a consensus view is developing that both the frequency and the intensity of storms are likely to increase in the coming years, in essence due to the increasing energy of the combined ocean-atmosphere system in our globally warmed future. For example, a warmer surface ocean is likely to fuel more severe hurricanes and typhoons. Rising sea levels, subsidence of coastal areas due to groundwater extraction, and other corollary processes will make a bad situation even worse. My opinion, which I desperately hope proves wrong, is that we are seeing the “New Normal” in all its power and destructive fury.

There is reasoned and informed discussion by scientists and public policy experts on what, if anything, can or should be done. For reasons relating to how long globe-warming CO2 is retained in the atmosphere, were humanity to cease emitting all CO2 tomorrow, the effects would still be felt for upwards of 100-plus years. Of course, CO2 emissions most certainly will not stop tomorrow. Thus, in addition to continuing to research and refine our understanding of climate change, we must also make real and lasting decisions about adaptation, mitigation, and coexistence with our new Mother Earth.

Writing in the Boston Globe earlier this year, Daniel P. Schrag, director of Harvard University’s Center for the Environment, and I argue for “managed retreat” and “constructive resilience” as pathways that may yield some success as we wrestle with our future. For example, the city of Boston is proposing new zoning rules for construction. Such proactiveness is to be applauded. “Managed retreat,” whereby coastal communities make hard decisions about which areas to protect and which to let be “reclaimed” by the sea over a decadal or generational timescale, should be candidly considered. Such strategies can be global in nature and not restricted to the wealthier nations. Consider Bangladesh, with its population of 150 million people, at least one quarter of whom live at an elevation of four feet or less. A 1991 cyclone there killed 136,000.

How much more suffering on this scale can humanity bear without acting?

Richard Murray is a College of Arts & Sciences professor of earth and environment and a Scituate, Mass., selectman. He can be reached at rickm@bu.edu.

There are 5 comments on POV: Is Philippines Typhoon the New Normal?

POV: Is Philippines Typhoon the New Normal?
5
share this