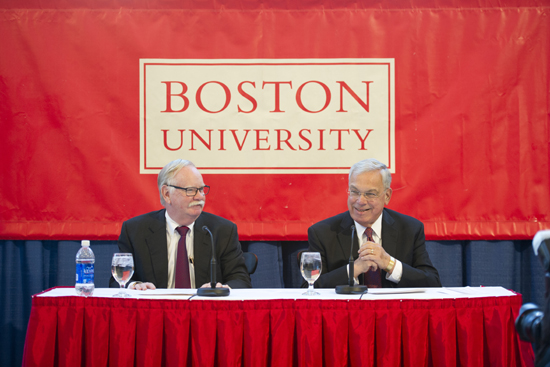 BU President Robert A. Brown and Boston Mayor Thomas M. Menino (Hon.’01) address media, guests, and students at a press conference announcing that the outgoing mayor will join BU in February to help lead the new Initiative on Cities, which will define the politics and services needed for cities to thrive as economic hubs in the 21st century. Photo by Cydney Scott

Boston University will bring the 20 years of expertise of one of the most accomplished mayors in the country to the Charles River Campus next semester. Outgoing Boston Mayor Thomas M. Menino, whose leadership transformed Boston from a city that seemed to be running in place to a magnet for entrepreneurs, artists, and young professionals, will join the BU faculty in February to help lead an initiative that will define the politics and services, such as education, health care, transportation, and technology, needed for cities to thrive as economic hubs in the 21st century. Menino and BU President Robert A. Brown announced the appointment at a press conference at 10 a.m. on Wednesday at 100 Bay State Rd.

Menino (Hon.’01), who leaves office in January after choosing not to run for a sixth term, will become codirector of the Initiative on Cities (IoC), which will convene the best current and former leaders of cities to share with academics and scholars from around the world their practical knowledge of how urban areas drive growth. The IoC will be affiliated with BU’s Frederick S. Pardee Center for the Study of the Longer-Range Future and will study the governance and organization of the world’s swelling urban areas. Graham Wilson, a College of Arts & Sciences professor and chair of political science, will codirect the IoC.

Researchers such as Lucy Hutyra, a CAS assistant professor of earth and environment, have predicted booming urban growth in the first decades of this century. Hutyra sees a tripling of urban spaces worldwide by 2030, and many experts believe that the quality of life of five billion city dwellers may depend on innovative solutions developed in academic settings.

“Today, more than any time in our past, the economic and cultural future of countries around the world relies on the development of major cities as hubs of knowledge creation and economic growth,” says Brown. “Developing cities into thriving, inclusive, and sustainable environments must be at the heart of our agenda as a university in the heart of a great city. It is a singular opportunity to bring Tom Menino to Boston University to help lead this initiative. Through his visionary leadership of the city of Boston, Mayor Menino has shown himself to be at the forefront of the thoughtful, long-term planning and governance needed to create great cities. My hope is that the Initiative on Cities will help cities around the world be successful in the decades ahead.”

The Initiative on Cities will tap expertise in disciplines across the University, among them engineering, education, health care, law, economics, and environmental studies. It will also recruit faculty from other universities. The initiative will sponsor symposia, convene meetings to support policy makers, and hold an annual meeting, where city leaders from around the world will discuss such things as urban governance and the impact of climate change.

“Cities are the engines that drive regional growth,” says Menino. “Jobs, economic development, housing, and education all contribute to their success or failure, but it’s the leadership of those cities that makes the difference. I believe that is why this Initiative on Cities and its priorities are so important. I am honored to have this opportunity to continue to help American cities thrive. Our country depends on their success, and I am confident that our best days are ahead.”

Menino, who is Boston’s longest serving mayor, has been a powerful advocate of improved educational opportunities, public safety, housing, and economic opportunity. He began his career in public service in 1983 as a city councilor, a seat he held for nine years. As a councilor he brought the Main Street program to Boston to help rebuild the neighborhood business districts that have been essential to the city’s growth. He served as chair of the council’s planning and development committee and of its finance committee, which later became the ways and means committee. Menino is best known for his support of neighborhood development, his campaign against illegal guns, his promotion of the city’s Innovation District on the South Boston waterfront, and his efforts to make Boston more bicycle-friendly.

Stephen Burgay, BU’s senior vice president for external affairs, says that when the University extended the invitation to the mayor, it was careful to take preventive measures to avoid conflicts of interest. “When we reached out, we learned that the mayor had set up a process to allow him to consider future opportunities without creating any conflicts of interest,” says Burgay. “He had a third party act as an intermediary in conversations with potential employers, and was very clear that he would be recusing himself from any discussions of city-related business involving those enterprises.”

Burgay says the single largest piece of business between the University and the city involves a request for an amendment to BU’s master plan that would allow construction of a laboratory building for integrated life science and engineering research next to Morse Auditorium. That request has been submitted to the Boston Redevelopment Authority, after the Boston University Community Task Force process was completed successfully, he says. On another municipal front, the University was recently granted permission from the Boston Public Health Commission to conduct Biosafety Level-3 research at the National Emerging Infectious Diseases Laboratories (NEIDL). Burgay says those discussions began months ago and were held exclusively with the Public Health Commission.

Menino recently told a forum at the University of Massachusetts Lowell that he has received offers to lecture and organize conferences at Boston, Harvard, Northeastern, Brandeis, and Suffolk universities, according to the Boston Globe.

There are 12 comments on Menino Lands at BU