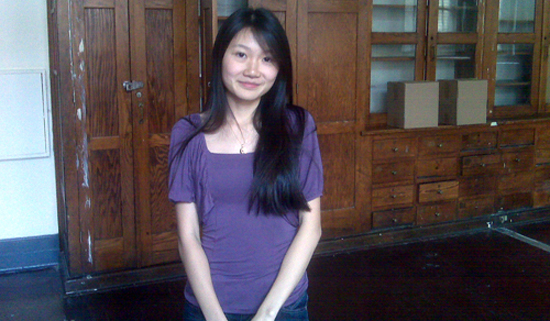 Binland Lee (CAS’13), a senior who was studying marine science, has been identified as the BU student killed in an Allston fire early Sunday morning. Photo courtesy of WNYC Radio

The BU student who died in an Allston fire early Sunday morning has been identified as Binland Lee (CAS’13), a senior who was studying marine science. The blaze, which broke out at 6:30 a.m., destroyed a three-story house at 87 Linden Street and injured nine residents, including two other University students, and six firefighters.

Lee, a former vice president of the BU Marine Science Association, was scheduled to graduate in September from BU’s Marine Program. She graduated in 2009 from Brooklyn Technical High School, a specialized high school in Brooklyn, N.Y., that accepts students who pass a tough admission exam. Lee was one of a group of students who completed a ten-day field course in Belize with John Finnerty, associate professor of biology. “I was struck by her intelligence, her determination, her vitality, and her infectious smile,” said Finnerty, describing Lee as “a source of optimism for the future.”

A spokesperson for the Boston Fire Department says that 18 people appeared to have been living in the building. BU Police Chief Thomas Robbins says nine BU students were among the residents, and three of them were not at home at the time of the fire. Robbins says two BU students were treated at area hospitals for non-life-threatening injuries.

The Boston Globe reports that one person jumped from the roof of the building and two others were rescued by firefighters on ladders. The cause of the fire is under investigation.

In a letter sent Sunday evening to the BU community, President Robert A. Brown said his thoughts and prayers go to the family and friends of the individual who died and to all the victims of the fire. “This tragedy comes close on the heels of the Boston Marathon losses, which have so affected our community,” Brown wrote. “We are working to marshal counseling and support resources for all those touched by the fire while continuing to meet the needs of others who have been affected by the Marathon bombings.”

Dean of Students Kenneth Elmore (SED’87) says the University will work with students who were hurt or displaced by the fire. The fire, he says, is a reminder that students should follow the advice on BU’s safety website, as well as the home fire safety website of the city of Boston.

There will be a Community Gathering at 7 in the George Sherman Union Metcalf Ballroom. Chaplains from Marsh Chapel, counselors, Boston University Police leadership, and staff from the Dean of Students Office will be on hand to discuss Sunday’s tragedy and fire safety issues.

There are 44 comments on BU Student Dies in Allston Fire