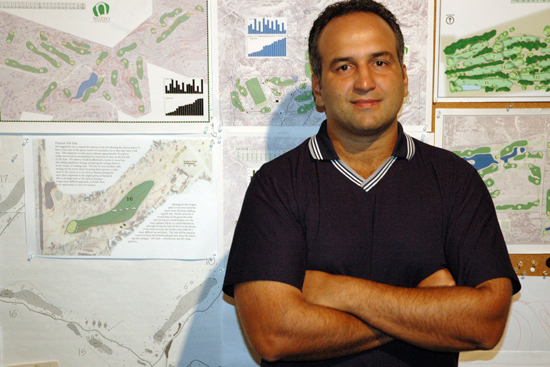 Mike Nuzzo (ENG’90) is using his Boston University engineering education to develop some of the world’s most innovative golf courses. Photos courtesy of Nuzzo Course Design

Mike Nuzzo’s fervor for both golf and golf course design springs from playing the game as a child with his father and designing mini-golf courses around and under furniture in the family apartment’s den. As a teen he caddied at a club in his hometown of Maplewood, N.J. But as he got older, a strong aptitude for engineering and design led him to choose an aerospace engineering major at the College of Engineering.

So how did a degree in aerospace engineering lead to a career as a golf course architect, most of whom have a degree in landscape architecture or turf management? Although Nuzzo (ENG’90) enjoyed the creative challenges of the engineering field he worked in for several years after graduating, he says, the golf bug proved too compelling to ignore. In fact, his background in aerospace engineering has been key to his success in designing and improving more than a dozen golf courses since 2000. Applying the most sophisticated design technology in the industry, he is using his engineering education to develop some of the world’s most innovative golf courses.

Nuzzo says that one of the highlights of his time at ENG was learning how to use computer-aided design (CAD), a tool he applied in his senior design project to design an aircraft. His CAD expertise helped him land his first job after graduating, with global medical technology firm Becton Dickinson, where he earned a patent for a labware product. It also served him well as a lead engineer at Lockheed Martin, the world’s largest aerospace company. There he spearheaded the development of a satellite antenna that provides phone and data communication services for up to 60 percent of the world’s population.

Armed with leading-edge CAD tools he had used at Lockheed Martin, a thorough knowledge of GPS, and solid design and planning skills, Nuzzo at 32 reinvented himself as a golf course design consultant, supporting architects, builders, and existing golf courses and developers. He initially planned to become an associate at a golf course architectural firm, but his success with a project he worked on from 2006 to 2008 in Texas, Wolf Point, convinced him to partner with a construction manager and run his own firm. That firm, Nuzzo Course Design, is based in Houston.

To boost the fun factor, he favors large fairways that enable golfers to choose from a range of tee locations and types of shots, a variety of greens shapes and hole lengths, and a park-like design that accentuates the beauty of the landscape. To streamline course maintenance, he fashions highly efficient irrigation and drainage systems and uses consistent construction methods that simplify operations. These methods exploit the natural contours of the land to minimize earth-moving operations and rely primarily on local materials and labor.

Maximizing the fun, maintainability, and efficiency of a golf course is where engineering comes in. As he surveys a course-in-progress, Nuzzo carries a handheld GPS receiver, which shows an illustration of the planned golf course superimposed on an aerial photograph. The technology enables him to precisely define and update course boundaries and features, tweaking them on the fly as he walks the course.

Using that system, Nuzzo transformed a 200-acre cattle ranch on the Texas Gulf Coast into Wolf Point, a world-class 18-hole golf course designed for the owner’s personal use. The project took two years to complete. To ensure an aesthetically pleasing, natural-looking field with large fairways and multishaped greens that promote a variety of shots, Nuzzo used his integrated PC/GPS receiver so everything was where he wanted it and as much of the land as possible—about 100 acres—remained undisturbed.

“Wolf Point is a lot more fun than the typical Professional Golfers Association course, where the fairways are smaller so it’s easier to lose balls, the greens are built for the same type of shot, long and high, and everything is so well defined it looks like a puzzle or game board,” Nuzzo says.

He also used the handheld GPS to map existing drainage features and plan an extensive drainage and irrigation piping network to keep turf in ideal condition, thus reducing maintenance costs. Linking pipes to natural swells in the landscape to move water through the network minimized the need for piping materials and earthworks. To construct the piping network efficiently, Nuzzo used GPS to determine the precise locations of about 750 rotors used to distribute water across it.

All these measures paid off.

Wolf Point got some glowing reviews. Texas Golfer magazine proclaimed it a revelation. Golf Course Architecture editor Adam Lawrence concurred. “Astounding…one of the very greatest courses I have seen…full of clever design work,” he wrote. “Not only is it probably the best ﬁrst course by a modern architect that I have seen, but it is also a living case study for the future of golf design and construction.”

At the heart of Nuzzo’s success is an intense passion for the game and its design, says his wife, Nancy (SMG’91). “Because golf is always on his mind, ideas can pop in his head at any time, day or night,” she says, “from how a routing could be positioned differently to make it more fun to play to how an irrigation system could be redesigned to be more cost-effective.”

Nuzzo’s 8- and 11-year-old daughters are no strangers to the fabled Gulf Coast course. With the other golf courses in Houston catering to more advanced players, Wolf Point is the only place Nuzzo can take them to play the game.

Sure beats miniature golf in the den.

A version of this article was originally published in the spring 2013 edition of Engineer.

From Aerospace to Golf Courses