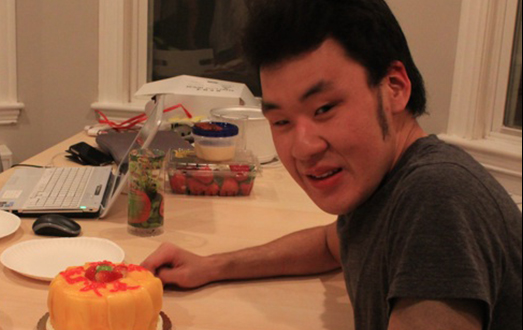 The bicyclist who was killed Monday night in an accident involving an MBTA bus has been identified as Chung-Wei Yang (CAS’15), an international relations major, who was known as “Victor” on the Charles River Campus and on Facebook. Yang came to BU from Taiwan in January, and was a second semester student. He lived off campus.

Yang’s parents arrived in Boston Thursday afternoon, and gave permission for the media to identify their son, who was riding his bike through the busy Allston intersection of Harvard Avenue and Brighton Avenue at 6:30 p.m. when he was struck by a number 57 MBTA bus. He was pronounced dead at Beth Israel Deaconess Medical Center.

Jake Wark, a spokesperson for the Suffolk County District Attorney’s Office, says the driver of the bus has been tested for drugs and alcohol. Test results have not been released. The driver has not been charged, but has been taken out of service while the incident is investigated by police from the MBTA and the Boston Police Department. Wark says investigators are interviewing witnesses and studying surveillance video in an effort to establish the sequence of events leading to the accident.

Dean of Students Kenneth Elmore says Yang’s death is a very terrible loss. “I know that for me, at times like this, it really helps to talk to people who will listen to my concerns and anxieties,” says Elmore (SED’87). “It might be useful for some students to do the same thing.”

Mio Shang (CAS’15), who was in a writing class with Yang, says the class may never be the same. “He was the most active guy in the class,” says Shang. “He would be the first one to speak up, and was always really funny. Our class was very united and would hang out together on the weekends. Victor invited us all to visit him at his home in Taiwan during the summer holidays.”

“He was a very respectful and cheerful student who always showed interest in the class,” says Patricio Sanhueza, a teaching fellow who taught Yang in the College of Arts & Sciences astronomy course Alien Worlds. “He was also very happy studying here at BU. It is really sad what happened to him.”

Amy Laskowski contributed to this article; she can be reached at amlaskow@bu.edu.

Victim of Fatal Bike Accident Was Enrolled in CAS