In the video above, Judy Coates (SED’74,’81, SAR’86) demonstrates her work as a certified canine rehabilitation therapist. Photos by Melody Komyerov View closed captions on YouTube

Omo walks like John Wayne. The honey-colored dog’s right hind leg kicks out to the side as he shuffles through a loop around the animal clinic reception area, sniffing strangers. Every couple of steps, the leg gives out and he sinks onto his rear, his bushy tail strewing hair across the floor.

“You must be here to see Judy,” a passing veterinarian says to the border collie–golden retriever mix.

Judy Coates (SED’74,’81, SAR’86) is a certified canine rehabilitation therapist—for legal reasons, she can’t call herself a physical therapist for dogs, but that term sums up her work. She helps dachshunds overcome back injuries, Labradors cope with arthritis, and English setters get through knee surgery. Today, she’s treating nine-year-old Omo for a misbehaving back leg.

His sniffing session over, Omo begins his first visit to the Small Animal Veterinary Emergency Services clinic in Lebanon, N.H., with an evaluation. While reassuring the dog—“It’s OK, sweetie pie”—Coates quizzes his owner about Omo’s medical history, recent problems, and home life; the latter elicits an early recommendation—cheap scatter rugs to add some grip to wooden floors. But she needs to see him in action, too, so his owner eases the family pet into a big warehouse-style exercise room scattered with jumps, hoops, and balls. 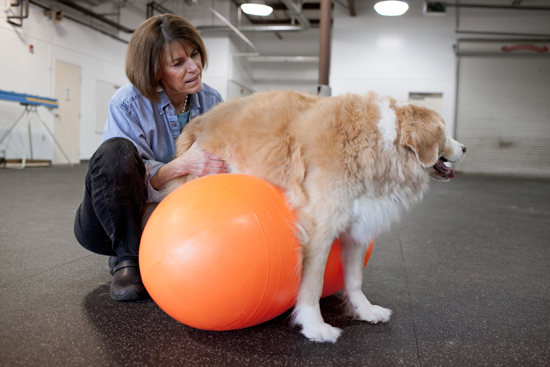 After a couple of laps, Coates is honing in on a problem. Omo has limited proprioception—he doesn’t quite know where his joints and limbs are in relation to each other. She ends the laps and gives Omo a hug to check out his muscles: his quads are good, but his hamstrings are flabby. Coates holds a gourmet sweet-potato-and-duck treat behind him to “see if he can take his head towards his back,” she says. “I want to see range of motion in his back, in his spine.” A second treat, chicken this time, is held high in front of his nose to force him onto his hind legs.

Coates trained and then taught at Sargent for much of the 1990s as a physical therapist for humans (she still sees some two-legged patients); she first started treating dogs in the mid-1990s. The American Physical Therapy Association had been on the fence for years about therapy for dogs; when that changed, Coates, who’d always loved animals, took a certification course in canine rehab and jumped in. While she’s had to “become very savvy in canine behavior” to work with patients who can’t talk back, she says, many of the treatments she uses for pets are the same as those she learned at Sargent for helping people. “The soft tissues of the canine species are identical to those of the human species. We use all of the same techniques in terms of trigger point work, friction massage, and soft tissue and joint mobilization.”

The major difference is the speed of recovery. Dogs can quickly bounce back from injuries that can take humans years to return from. Coates has even had medical doctors bring in their pets and tell her that if the dog were human, they wouldn’t expect any progress—no matter how much time they had. That’s because dogs don’t “have a left and right brain in the same way that people have,” according to Coates, “so they have a lot more to pull from in terms of nerve regeneration and neurological recovery.” 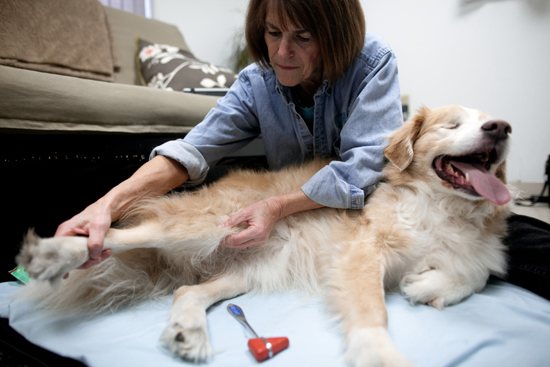 Coates moves her evaluation into a smaller examination room. Again, she’s on the floor, this time working Omo’s muscles as he sits on a blue pulsed electric magnetic field mat, which uses pain-free magnets to stimulate the oxygen in tissues. Having spotted proprioceptive loss, she is looking for the root cause of the problem; when she pulls the psoas muscle in his back, Omo twitches and she has her answer. Omo is likely suffering from a neurological issue in the spine. He’d been seen by a veterinarian for arthritis before his back leg went rogue (Coates won’t treat any animal without a referral), but she thinks an MRI and a trip to a neurologist would be beneficial to confirm her diagnosis.

In the meantime, she outlines some exercises for the owner to begin at home: “I spend a large part of every visit teaching owners a home exercise program and have them practice it with me,” Coates says. For Omo, the program includes tail pulls “for general traction against the spine,” tummy tickles to improve core stability, joint compressions, and “brushing and tapping against the grain of the hair” on his leg and back to “stimulate the nervous system.” Omo is also put on the pumpkin diet—swapping one-third of his kibble allowance for canned pumpkin—to help him get trim.

As veterinary care improves, Coates says, she’s seeing more dogs like Omo, who are nudging past their middle years and battling arthritis and other age-related conditions. This afternoon, she’ll be working with two dogs due to have orthopedic surgery at the clinic—one for a hip problem, the other for a knee issue. The only hitch she anticipates is their speedy recovery; while it “almost feels miraculous at times,” she jokingly says, that it “isn’t always good for my business.”

Omo, now full of duck and chicken treats, will be back, however. After an hour-and-a-half appointment, he’s not dropping to the floor as often, but the John Wayne swagger is still there. Before the afternoon’s patients arrive, he has time for a quick good-bye: a big, sloppy, wet lick for Coates. “Oh, thank you!” she says as her happy patient hops back to his owner. Whether he’ll be such a big fan when he finds out about the pumpkin diet is another matter. 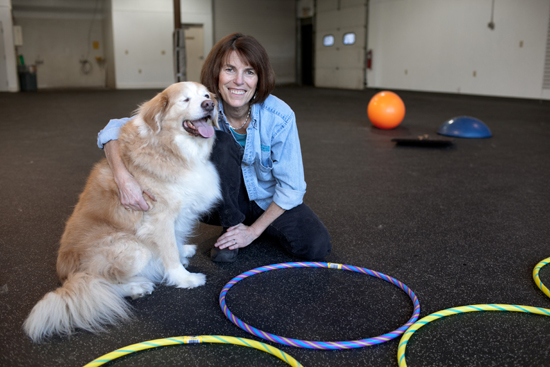 Physical Therapy of the Four-Legged Variety