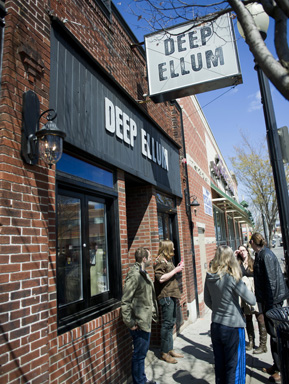 Looking to take brunch and bar food to the next level? Consider a trip to Deep Ellum, an Allston eatery that serves traditional comfort food in an unassuming bar setting, but elevates the drinking and dining experience through its creative dishes and unique beverages.

Opened in 2007, Deep Ellum is named for an area of Dallas known for its great food, nightlife, and above all, its jazz and blues music. The restaurant describes itself as a place that’s all about the “appreciation of craft beer, classic cocktails, and wholesome cooking,” and we’re happy to report that it delivers on all counts.

We arrived at the restaurant on a warm, sunny day, and elected to eat outside on the spacious rear patio. There’s also plenty of seating in the restaurant’s bar as well as traditional table seating. While the interior is a little cramped, the staff was friendly and knowledgeable, which made for a pleasant visit.

Deep Ellum is renowned for its unique selection of craft beers, so we started off with 2 of the 28 available “daily drafts,” neither of which we’d tried before. The Spring Training IPA ($6), made by the Cambridge Brewing Company, was light, but a little boring, with a malty taste and without much sweetness. It was refreshing as a palate cleanser and had a definite “summer beer” feel to it, but didn’t do much to enhance our meal.

We also tried a Jack D’or, by another local brewery, Pretty Things. Its lightness and fruity notes reminded us of a Belgian farmhouse ale. At 6.5 percent ABV, this brew is potent, but hints of banana and apricot flavors hide the relatively high alcohol content nicely.

Although the beers we sampled didn’t blow us away, the brunch dishes were another story. Brunch is served from 11 a.m. to 4 p.m. every day (weekends starting at 10 a.m.), but the two entreés we selected were good enough to consider making separate trips for breakfast and lunch just to eat them twice.

First up was the Duck Confit Hash ($10), which was served in a small iron skillet and packed with flavor. The rich dish featured savory pieces of duck with fingerling potatoes, braised Swiss chard, and bits of red pepper. The hash was topped with two perfectly cooked fried eggs, with runny yolks that spilled into the rest of the dish when cut. We devoured the delicious dish before the steam could even finish rising from the plate. 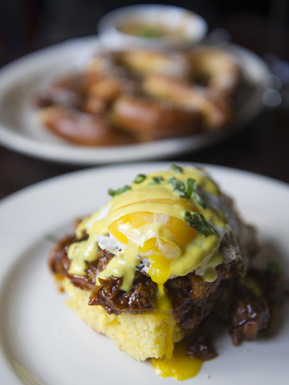 We were equally pleased with our second entrée, the BBQ Breakfast ($9) (right), a hearty plate of braised pork shoulder coated with a sweet barbecue sauce sitting atop a perfectly moist piece of cornbread. The textures complemented one another well, and dashes of mustard aioli provided just enough heat to cut the sweetness of the sauce.

Like the duck, this dish came with a fried egg on top. The cornbread absorbed some of the barbecue sauce, egg yolk, and aioli, and made for quite a memorable meal.

We timed our visit to coincide with the end of brunch and the beginning of dinner. After inhaling our two spectacular brunch entreés, we ordered two of the starter items on the dinner menu. While they lacked the culinary finesse of our brunch selections, they were quite tasty, especially as bar food goes. 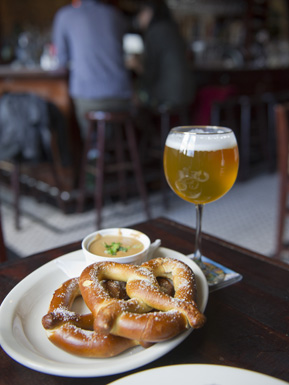 We started with the Two Pretzels and Beer Cheese plate ($8) (left), two giant soft-baked pretzels served with a generous portion of what appeared to be processed cheese dip infused with a stout-like beer flavor. The cheese was a major disappointment, but the pretzels were outstanding—big, perfectly salted, and still warm from the oven.

For our other starter, we ordered the Hot Damn Wings ($8)—eight large wings that elicited mixed reactions from this reviewer and a friend. We agreed that the wings were cooked perfectly—crispy and buttery outside, juicy and tender inside. But they weren’t very spicy—in fact, they were a little sweet—and after first guessing the coating contained peanut butter, we were told by our server that, in fact, the seasoning was nutmeg.

One of us felt the sweet-and-spicy combination was exciting to the palate, and pronounced the addition of nutmeg to be genius. But the other was disappointed, opining that they tasted like breakfast, not bar, fare and failed to deliver an authentic buffalo wing experience.

That said, the wings weren’t enough to detract from our meal. We both left feeling very full and very pleased. With above-average bar food and superb brunch dishes, Deep Ellum is the spot for those looking to treat themselves to a reasonably priced, inspired afternoon meal.

Deep Ellum is at 477 Cambridge St., Allston. Brunch is served from 11 a.m. to 4 p.m. Monday through Friday, and 10 a.m. to 4 p.m. Saturday and Sunday. Dinner is served 4 p.m. to midnight every day. Find the bar’s full menu here. All major credit cards are accepted. By public transportation, take the number 57 bus to Quint Avenue.