In the video above, Lydia Glenn (CAS’13) and Brendan Hathaway (ENG’14) of the BU Beekeepers check how the Commencement bees have integrated with their existing hives along the Charles River. Photos by Cydney Scott View closed captions on YouTube

While seniors were given advice and words of wisdom during this year’s Commencement, junior Lydia Glenn was given something else: a swarm of bees. And it was just what she wanted.

Glenn’s gift arrived at BU about 45 minutes before the start of the Commencement ceremony, soaring over Nickerson field and touching down on one of the thousands of folding chairs set up for the ceremony. Havoc was averted when plumbing department manager Bill Murray, a backyard beekeeper who was working nearby, calmly lifted the bee-enveloped chair and placed it in a recycling bin. Murray knew just what to do with the swarm—he handed it over to Glenn (CAS’13), the president of BU Beekeepers. She dumped the little wanderers into an empty box and eventually merged them with a hive that had somehow survived the winter without a queen.

“The swarm was a blessing,” Glenn says. “We were able to rescue the hive with a new queen.”

Bee aficionados can visit the Commencement crashers this Saturday as part of Tour de Hives 2012, a daylong bicycling event organized by the Boston Beekeepers Club that will tour four urban apiaries in Cambridge and Somerville, with the final stop the Museum of Science.

On a recent Friday, Glenn slipped on elbow-length leather gloves and club vice president Brendan Hathaway (ENG’14) donned a bee bonnet to check on “Goldenrod,” the newly integrated hive nestled beside two others (“Snapdragon” and “Poison Hivey”) on the banks of the Charles River near the DeWolfe Boathouse. A smoker stuffed with burning oak leaves filled the air with an earthy campfire scent, as the beekeepers puffed smoke into the hive. The smoke, Glenn explained, prompts the bees to retreat into the hive and gorge on honey as they wait for an impending fire. Their fat bellies make them less nimble, less likely to sting invaders, and easier to manipulate.

Using a metal hive tool, Glenn broke through the sappy glue bonding the row of frames to the side of the box, hooked an outer frame gently, and slid it up for inspection. She studied it for signs that the new queen had been accepted.

When the club received their new charges, Glenn and Hathaway didn’t know if the swarm was a breakaway group from their own hives or if they were newcomers. Bees are homebodies, and will often return to their hive if they are within a two-mile radius. So once Glenn gently shook the bees from the folding chair into an empty hive box, she and Hathaway drove it to Hathaway’s home in Newton to reset the bees’ homing devices. Once outside the two-mile radius, bees will not attempt returning to their original home, but set up shop in the new location. A week later they returned the box to integrate it with Goldenrod. As an extra precaution, they placed a single sheet of newspaper between the hive’s top box and the swarm box to prevent the two groups attacking each other and allow time for their scents to intermingle. When Glenn checked the hive less than a week later, the bees had eaten through the paper, and the two groups were one.

Hive integration was a successful first step, but it didn’t guarantee the queen would lay eggs in her new digs. And that’s why, nearly a month later, Glenn was inspecting the comb, which was teeming with bees just inches from her unmasked face. Goldenrod’s outer frames glistened with deposited nectar. Other frames showed white-capped comb, a sure sign of honey and a guarantee that the bees were making their own food. Then she pulled a central frame from the box. Bingo! White comb arched above a cluster of amber-colored capped comb—incubating baby bees.

As Glenn explained, a virgin queen travels away from the hive once to mate (with multiple drone, or male, bees) and can lay eggs for up to three years. Drones die immediately after mating (and only do so with an unrelated queen bee). And worker, or female, bees live up to six weeks during peak summer months or slightly longer during the inactive winter. With such short life spans for most bees, a hive’s focus is to “live to survive,” Hathaway said, through constant regeneration.

Goldenrod was back on that path. Worker bees skittered across the comb, cleaning, feeding newly hatched bees, and depositing nectar and pollen into open spaces. Suddenly Glenn paused. She’d heard a growing buzz and noticed bees latching onto her gloves—warning signs before a sting. “They’re getting pissy ’cause I’m breaking their house,” she said, and returned the frames back in the order she found them. 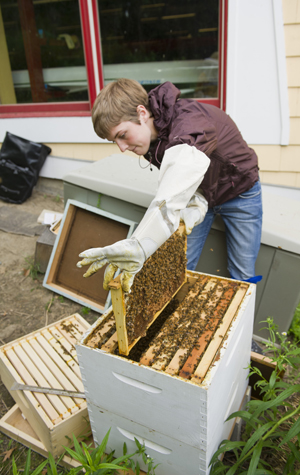 Hathaway pried open neighboring hive Poison Hivey to check its progress. “That’s all full of beautiful honey,” Glenn said. The two dug into the middle box, carefully removing frames and inspecting them for brood. Glenn gave a tiny squeal—there’s bee birth all over the place. She pointed to a tiny black head emerging through an amber circle, its antennae opening the hole larger as it wiggled its body out of the tight space. A quick look revealed more births popping up everywhere.

The BU Beekeepers’ club is just two years old, and there has been much to learn. Their first hive died over the winter after members forgot to seal its entryway, allowing a mouse to crawl inside and attack the comb. In the spring, the club bought two new hives and split one (Snapdragon) to make a third (Poison Hivey). They noticed last fall that some bees “looked deformed,” Hathaway said, and were peppered with red mites. A natural pesticide patch on the bottom of the hive solved that problem. Then this spring’s queenless hive posed the latest challenge, one that was fortuitously resolved by the great Commencement swarm.

The Tour de Hives 2012 will be held on Saturday, June 23, from 9:30 a.m. to 4 p.m. Bikers will meet at the Growing Center, 22 Vinal Ave., Somerville, then travel to Best Bees, 110 Antrim St., Cambridge, by 11:15 a.m. Bee tourists will next eat lunch and watch the documentary Sister Bee at the DeWolfe Boathouse, near the BU hives, in Cambridge, at 12:30 p.m. The final stop will be the Museum of Science, One Science Park, Boston, at 3:15 p.m. The event is free, but a $20 donation will earn apiary tourists a T-shirt and access to the Museum of Science. Bring a picnic lunch. The event’s rain date is Sunday.

Yes, BU Has an Equestrian Team. And It Just Had a Record Season

There are 8 comments on Commencement Bees Happy in New Home