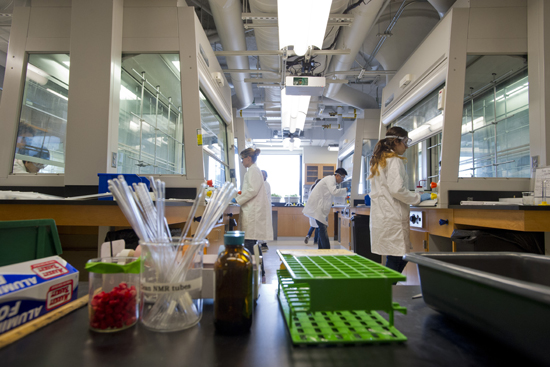 Boston University has been invited to join the prestigious Association of American Universities (AAU) after a review of the University’s research and academic programs. Photo by Kalman Zabarsky

Boston University has joined the Association of American Universities (AAU), an elite organization of 61 leading research universities in the United States and Canada. BU, one of only 4 universities invited to join the group since 2000, becomes the 62nd member. In the Boston area, only Harvard, MIT, and Brandeis are also members.

Hunter R. Rawlings III, president of the AAU, announced Monday morning that President Robert A. Brown had accepted the association’s invitation. Rawlings says the decision to extend the invitation was based on an in-depth review of the University’s research and academic programs.

Brown says he is very pleased to have the University join the AAU. “It’s gratifying for Boston University to receive this recognition for the quality of our education and research programs,” he says. “We look forward to participating with the AAU membership in helping guide the future of research universities in the United States as a critical resource for American leadership in higher education, knowledge creation, and innovation.”

Membership in the organization is by invitation only, and is based on several criteria: the quality of programs of academic research and scholarship; undergraduate, graduate, and professional education in a number of fields; and general recognition that a university is outstanding by reason of the excellence of its research and education programs. A membership committee of AAU presidents and chancellors periodically reviews universities for AAU membership; institutions recommended for membership must be approved by a three-fourths vote of the membership.

“Boston University’s admission to the AAU is first and foremost an acknowledgment of the quality and productivity of our outstanding faculty,” says Jean Morrison, University provost and chief academic officer. “They are making fundamentally important contributions in disciplines ranging from the humanities and social sciences to the natural sciences, engineering, and medicine. But in addition to the strength of our faculty, this recognition is a testament to the exceptional leadership of our president, Bob Brown. The results of his transformative leadership are coming to fruition, and the University’s admission into the AAU is one of the very significant tangible results.”

Since his arrival at BU in 2005, Brown has made research a priority, recruiting and developing faculty in the sciences, engineering, social sciences, and humanities. In the past year alone, the University hired 53 new faculty members on the Charles River Campus, including 15 for newly created positions, and 48 new faculty on the Medical Campus. In fiscal 2012, BU received $348.4 million in research awards, one of several criteria considered in the AAU admissions process.

Recent research awards include $10 million from the National Institutes of Health to establish an Autism Center of Excellence under the leadership of Helen Tager-Flusberg, a College of Arts & Sciences professor of psychology, and $2 million from the same agency to help graduate students and postdoctoral fellows develop diagnostic and therapeutic tools for various types of cancer.

The Bill & Melinda Gates Foundation has also recognized the promise of BU research. In 2009, it awarded $8.5 million to the Center for Global Health & Development, operating under the umbrella of the School of Public Health and the leadership of Jonathon Simon, Robert A. Knox Professor and chair of international health, to explore inexpensive ways to decrease neonatal mortality in Zambia. The foundation also funded an effort by James Collins, a William Fairfield Warren Distinguished Professor and College of Engineering professor of biomedical engineering, to explore a novel approach to cholera prevention, and research by Muhammad Zaman, an ENG associate professor of biomedical engineering, to find better ways to detect counterfeit drugs in Africa and Asia.

The depth and breadth of research at BU has also enhanced the undergraduate experience, enabling students to participate in cutting-edge projects. In April, Morrison doubled the annual funding, to more than $1 million, for the Undergraduate Research Opportunities Program, which has supported the work of more than 1,500 students since 1997.

“Joining the AAU is a recognition of the national prominence of our faculty and our research,” says Brown. “A major impact is that this allows us to participate in all kinds of endeavors with like-minded institutions. It gives us a seat at the table, and that will help this institution enormously.”

There are 21 comments on BU Joins Association of American Universities