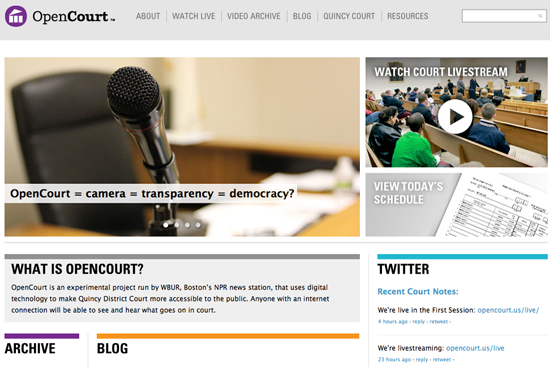 At a hearing before the Supreme Judicial Court (SJC) on November 8, Assistant District Attorney Varsha Kukafka argued that the posting of a hearing involving Norman Barnes, who pleaded not guilty to kidnapping two teenaged girls and forcing them to be prostitutes, would revictimize one of the teenagers, whose name was inadvertently mentioned by Barnes’ attorney. Arguing the case for WBUR, BU associate general counsel Lawrence S. Elswit said the radio station has a First Amendment right to archive the hearing, and that responsible news organizations would protect victims of sex crimes from identification. In this case, he said, WBUR voluntarily agreed not to publish the identity of the victim. The court is expected to decide the case in the next few weeks.

Since May, OpenCourt has stationed a video camera to beam live coverage, with daily archives, of proceedings in Quincy District’s First Session courtroom. A Wi-Fi network has also been created, allowing journalists and bloggers to transmit stories from the courtroom. WBUR executive editor John Davidow says the project is the first major experiment with journalism’s court coverage since cameras were permitted in courtrooms a generation ago, and a possible model for a nationally accepted practice.

In his brief to the SJC, Elswit also argued that in the Barnes case, the privacy horse was out of the barn, because other news outlets have disseminated identifying information about the victim. Elswit cited the Boston Globe, which he said printed “the street where the victim was kidnapped, the price the defendant charged customers, the color of the lingerie given to her, and the names of some of the hotels to which she was taken,” the Boston Herald (“mentioning the street on which the defendant allegedly met the victim, the towns she was taken to, and how her aunt and uncle found her”), and the Dorchester Reporter, which printed similar information and the alleged victim’s high school.

Barnes isn’t the only defendant seeking to squelch OpenCourt’s coverage. A lawyer for the defendant in another case, Charles Diorio, charged with assault, kidnapping, and witness intimidation, asked the SJC to block archiving of his client’s proceedings, as well as live streaming from the courtroom while the justices weigh his request. The lawyer argued that video records of the proceedings might bias a potential jury against Diorio at a future trial.

In that case, argued Elswit, “So much information about Diorio is already in wide distribution through other media channels that efforts to conceal it from potential witnesses and jurors by restricting OpenCourt’s archive cannot meaningfully succeed.”

Diorio’s lawyer argued that OpenCourt’s recordings should be considered a court record, which the SJC could restrict without violating the First Amendment.

Davidow says that while the country’s founders did not foresee the Internet, they did foresee the risks of allowing public access to courtroom proceedings, and approved that access anyway. He says that as a responsible news organization, WBUR will edit its own material. “We’re not looking for the state to tell us what we can or cannot print,” he says. “That’s prior restraint.”

He also says there is some territory where the OpenCourt project simply will not tread. “We’ve decided not to do domestic violence cases, period,” he says. “They’re not going into the camera. That’s a voluntary thing.”

While bloggers in OpenCourt’s program don’t necessarily adhere to journalistic standards and might print a victim’s name in their accounts, he says, any citizen can walk into a courtroom, learn the name, and disseminate it out of court.

Former ABC News journalist Robert Zelnick, a College of Communication journalism professor and a lawyer who has written about the First Amendment, says that “the sort of gag rule requested here will not and should not be granted,” based on past U.S. Supreme Court reversals of various states’ laws limiting what the media may publish. “Compassion,” he says, “is no justification for the gouging of constitutional rights.”

Rather than pitting First Amendment rights against privacy rights, Zelnick says, the WBUR case pivots on “the wisdom of editors who must decide whether it is appropriate, in this particular case, to subordinate the sensibilities of a victim of sexual brutality to the desire of news producers to broadcast the full story.”

Meanwhile, OpenCourt may face another hurdle. Launched with a one-year grant from the John S. and James L. Knight Foundation, the project hopes to serve as a model for Internet coverage of courts around the country. But the grant is expiring, and WBUR is seeking other money to continue the project. Whether or not that will happen “is an open question for OpenCourt,” says Davidow, who declines to say when the project might have to stop if new funding isn’t forthcoming.