A few of the projects

Surge (2007), by Deborah and Richard Cornell

On the Street Where I Live (2005), by Jennifer Schwartz

The Stitched Wall Project (2002), by Cindy Ludlam and shown as part of her MFA Thesis Exhibition

Gallery on the Grid (2001) including Tracer by Deborah and Richard Cornell and Soft, Fluffy, and Virtual by Cindy Ludlam 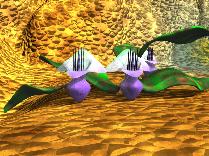