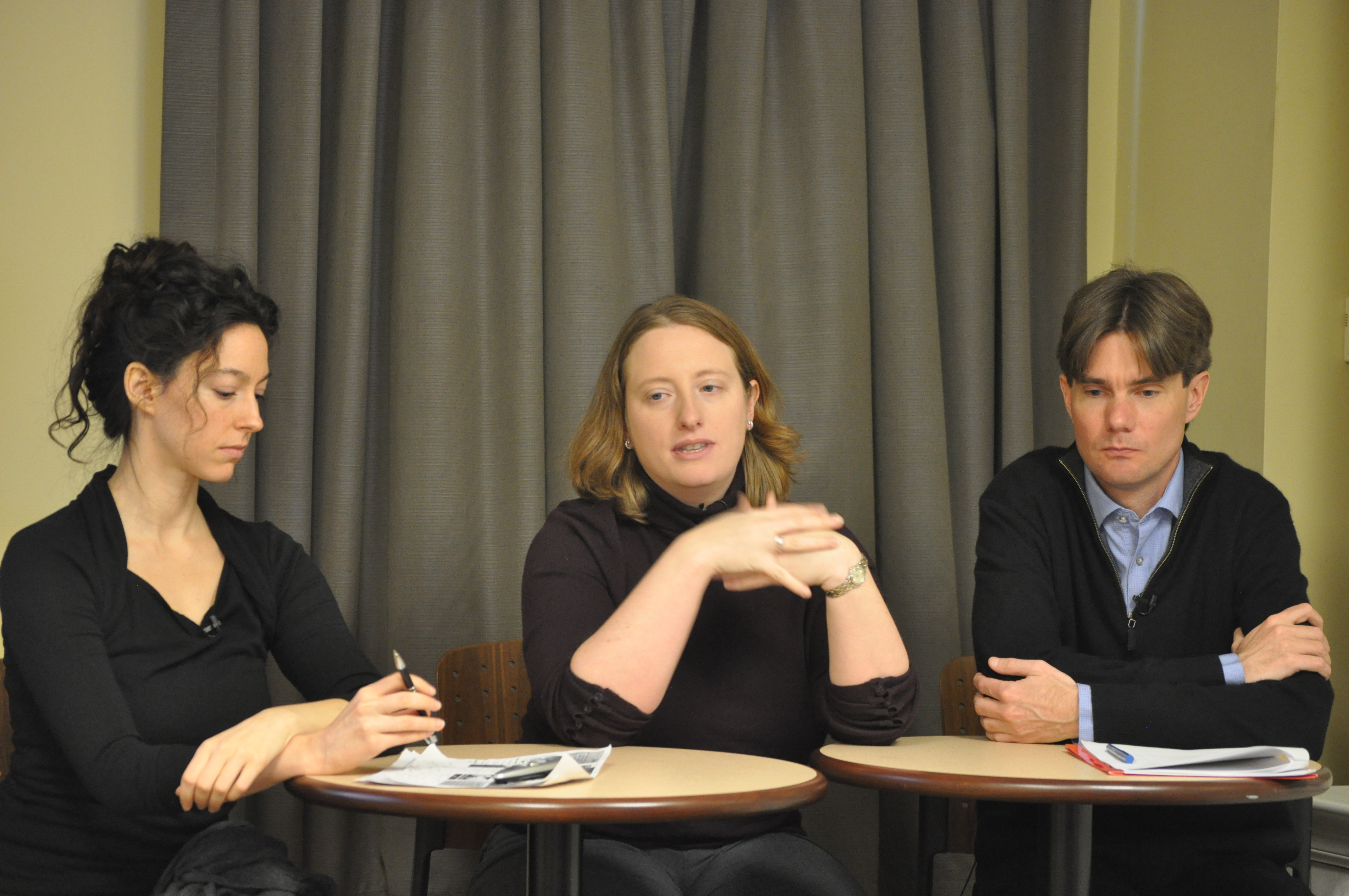 The Pardee House Seminar on Feb. 25 titled The New Global Agreement on Mercury: Will It Make a Difference? featured three panelists who attended some of the international negotiation sessions leading up to announcement of the new agreement in January.  The three offered their perspectives on how effective the new agreement will be.

Pardee Faculty Fellow Henrik Selin (International Relations, BU) moderated the seminar, which also featured 2011 Pardee Graduate Summer Fellow and doctoral candidate Kristin Sippl (Political Science, BU) and Prof. Noelle Eckley Selin, (Atmospheric Chemistry, MIT). The 90-minute lunch time session focused on the Minamata Convention on Mercury, a global legally binding treaty that provides for controls and reductions across a variety of products, processes and industries in which mercury is used, released to the ground or water, or emitted to the air.

The treaty negotiations were convened by the United Nations Environment Programme (UNEP) in 2009, resulting in the agreement of the treaty provisions in Geneva in January 2013. Nations can officially sign on to the treaty starting in October at a special meeting to be held in Japan, and it is anticipated to take three to five years until the treaty will enter into force.

Exposure to mercury, which occurs around the globe, can cause brain and neurological issues and learning disabilities, and also has been linked cardio vascular impairment, according to the speakers.

Henrik Selin provided an overview of the agreement, noting that this is the first-ever agreement on a single element and also the first global treaty governing environmental emissions in more than a decade.  He reviewed some of the major provisions covered in the agreement, including: the supply and trade of mercury, including a ban on new mines; the products and processes in which mercury is used, such as certain types of lamps, switches and batteries; emissions to the air (primarily from coal-burning plants) and releases to land and water (largely from gold mining operations); artisanal and small-scale gold mining operations, which are a large source of releases; and resources and compliance provisions, including funding from the Global Environment Facility for implementation and compliance issues.

Overall, he said that the agreement identifies mercury as an issue of global concern, which is a positive development.  But because the treaty contains exceptions for certain industries and uses, and provides long timeline for reductions in use, he anticipates little short-term change in mercury use and emissions.  In addition, he said, for mercury reductions and process changes to occur in developing countries, a significant commitment from the international community for funding and building technical and governance capacity is required, but not very likely.

Noelle Selin discussed the physical properties of mercury, describing it as both a local issue and a global one because mercury continues cycling through the environment for six months or more from the time it is emitted or released, and its effects last many years. For example, while some emissions or releases may have very local impacts, she noted mercury emissions from coal power plants may be carried a great distance and fall over water bodies, where it bioaccumulates – or increases its relative level of concentration —  as it moves up the food chain.  High levels of mercury have been found in fish, seals, bears, and people in the Arctic.  While the provisions in the treaty won’t do anything to reduce the levels of mercury already active in the environment, she said, “each atom of mercury prevented (by the treaty) will avoid both short- and long-term impacts.”

Kristin Sippl talked about her work studying the use and impacts of mercury involved specifically in artisanal small-scale gold mining (ASGM).  The majority of such mining takes place in developing countries, and the mercury is often obtained through a black market that has developed in relation to mercury legally purchased for use in dentistry.  Miners pour mercury on dirt to bind to the gold and extract it from the soil, and then release excess mercury into the soil and water.  They also are exposed when burning mercury-gold amalgams, as the mercury vaporizes into the atmosphere.

Sippl noted the specific provisions related to gold mining in the treaty relate to trade of mercury and technical methods of reducing the use of the element in mining operations, which involve much larger and more difficult issues associated with informal markets, enforcement, and national governance.  Like Henrik Selin, she doesn’t expect big gains in environmental protection from the new treaty, but she thinks it may help raise awareness of the dangers of mercury among miners, perhaps spurring them to take steps to reduce their personal exposure.

To watch a video of the seminar, visit the multimedia section of this web site.